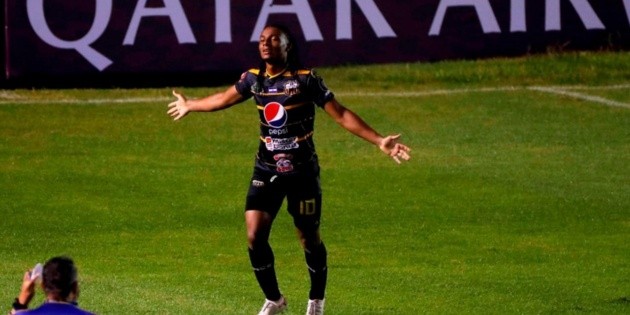 With annotation from the Colombian Edgar medrano At 70 ‘, the Once Deportivo made their international debut by drawing with the local Comunicaciones by one goal during their visit to Guatemala City in the first leg of their elimination round of the Preliminary phase of the CONCACAF League 2021.

Alexander Larin put the creams ahead at 36 ‘with a superb goal from a free kick that made the Chapin team dream that they had to give up two points at home and will have to look at Cuscatlán on August 19 for their ticket to the round of 16 phase where they already awaits the Alliance.

The border team dominated their nerves as a debutant in international competitions in the first 10 minutes of play since they knew how to withstand the pressure exerted by the cream team on the northern parcel defended by the Salvadoran team.

Once Deportivo tried in that period to reach the wings, where Enner Orellana ran down the left wing and Kevin Menjívar appeared in an unusual position, floating in the middle of the rival playing field and relieving himself with Marvin Morales and with the brand midfielder, Melvin Cartagena. .

That mobility of the former under 23 team put him at the gates eight minutes later to open the scoring when with speed he beat the backs of the two central defenders of the Chapin team and by intercepting the assistance of Cartagena, his definition was not the best just in the moment when goalkeeper Fredy Pérez tried to reduce his shooting angle by sending the ball over the local goal.

Comunicaciones sought to damage Yonatan Guardado’s goal from the initial whistle of the Mexican referee, Óscar Macías, since the goalkeeper of the Aurinegro team was demanded three times in the first seven minutes of play by the presence of Ecuadorian Juan Luis Anangonó.

The presence of the Salvadoran Alexander Larín as a midfielder on the left injected the Uruguayan team Willy Oliveira with a greater exit from that band since the national team joined José Contreras to try to open the Salvadoran defense.

Anangonó missed at 16 ‘the best chance of scoring in the match when the burly Ecuadorian attacker missed his header on the national goal as miraculously the ball passed by saluting the left post of the goal defended by Guarded.

The match was equated after the match crossed the equator of the first half as Once Deportivo dared to handle the ball better in his midfield after Kike Contreras managed to get off his mark and began to join with his teammates in the midfield at In order to look for the Colombian Medrano who still resented the support of the eastern Brayan Paz who had a hard time getting into the game.

But the game changed its course at 36 ‘with Alexander Larín’s great goal when he superbly charged a free kick executed from about four meters from the greater area after the foul received by the Honduran Lacayo after the border team lost possession of the ball to when trying to mount a counter.

The Salvadoran national team outlined from the left and with a measured shot he slipped the ball right into the upper left corner of Guarded’s goal that little or nothing could do to stop the shot from “el Cacho” to open the scoring.

Deportivo Once tried to react but was not able to put together an offensive play that managed to overcome the two Guatemalan centrals.

The first half ended with the advantage of Communications by the minimum thanks to the goal of Larín who was the difference in a match where the Chapin runner-up did not show that superiority that his history credits him.

For the second half, the Salvadoran team made the substitution of Kevin Menjívar from the beginning so that William Maldonado would go through the zone of the “2” of the Westerners.

The change helped Carlos Romero’s tactical idea as the former Sonsonate offered him a clearer exit to the national squad than he had in the first half.

Despite being up on the scoreboard, Comunicaciones was not capable of assaulting the last line of the Sporting Eleven since the Sibrian-Vargas duo prevailed over the attempts of the Catracho Lacayo and the Ecuadorian Anangonó.

Romero tried with the entry of the Jamaican Foster and the Chalateco Morales to oxygenate his attack since neither Brayan Paz nor Enrique Contreras weighed in the 63 minutes of play that they were on the court.

But the bet that coach Oliveira looked for when he sent Santís, the Mexican Bueno and the Costa Rican Lezcano to sustain the 1-0 scoreline was reversed a minute later with the historic goal of Once Deportivo in the legs of Colombian Edgar Medrano.

The western coffee scorer received the “taquito” ball from the Caribbean Foster and with force and speed he managed to break the mark of two local defenders to beat Pérez with a strong right-hand shot by sending the ball hit the left post to sign the 1-1.

Comunicaciones sought with the income of the American Yanez and the Cuban Espino in order to break the tie and almost achieved it when at 77 ‘the goalkeeper Guarded made the save of the game when Contreras finished off a center corner kick from the right wing. .

The last five minutes of the game was a monologue from Comunicaciones who turned in a disorderly way on the south goal defended by Guarded but without showing offensive capacity.

Jorge Cruz was the last substitution sent by Carlos Romero instead of the scorer Medrano with one minute left to go.

The four games that the referee Macía de México yielded only served for the Cuban Espino to see the second yellow card of the match as a corollary of what the local team did against a rival who believed it in the second half and could have taken a better result.