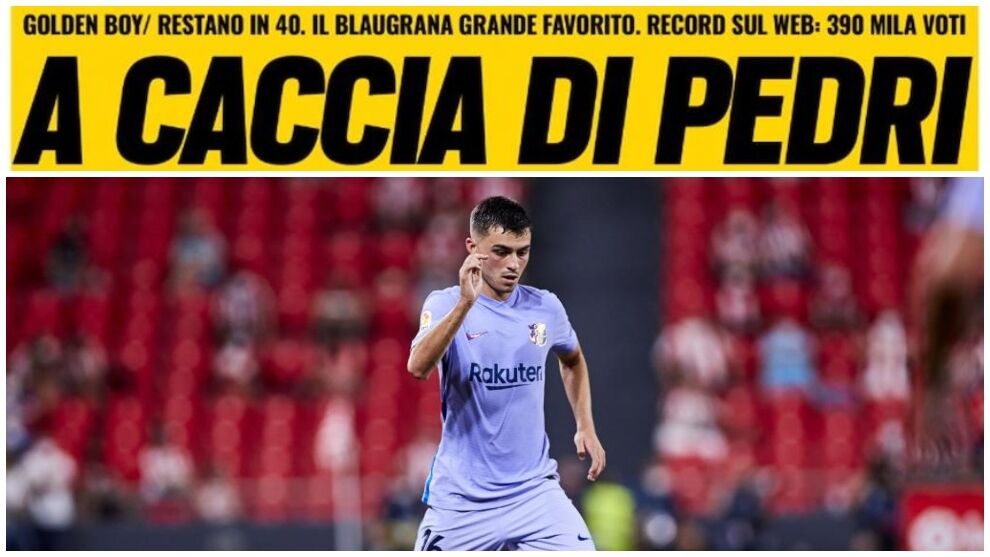 Pedri is the great favorite to take the Golden boy, the award that rewards the best player under 21 in Europe, a kind of Golden Ball for young people. Tuttosport, the medium that delivers it, has made a new cut in the preselection (there are only 40 players left) and places the canary of the Bara on pole. “On the hunt for Pedri”, he headlines.

The great year of Pedri, who has disputed Eurocup and Olympic Games, does not go unnoticed in Europe, where he is already highlighted for awards like this, which in the last edition took Erling haaland.

The french Eduardo Camavinga, Real Madrid, and Pedri’s teammate, ric Garca, from Barcelona, ​​are also among the forty finalists for the Golden Boy award for the best under-21 player of the year, after the last cut made this Thursday. Along with them, the Spanish Ander Barrenetexea, of the Royal Society, and Yremy Pino, from Villarreal.

The Turins daily “Tuttosport”, which has been awarding this award since 2003, cut from 60 to 40 the list of young talents who aspire to succeed the Norwegian Erling Haaland, winner of the 2020 edition.

Camavinga is the only Madrid player left on the list, after the Brazilian’s exclusions Rodrygo Goes and from spanish Miguel Gutirrez.

Pedri, an 18-year-old midfielder from Tenerife, is the main favorite after a brilliant season spent at Barcelona and with the Spanish national team, with which he was a semifinalist in the last European Championship. He was also part of the Spanish Olympic team that won silver in Tokyo.

Some of its main competitors are the English Bukayo saka, from Mikel Arteta’s Arsenal, and Jude Bellingham, Borussia Dortmund, and the also German midfielder Jamal musiala, from Bayern Mnich.

The first Golden Boy winner was the Dutch Rafael Van der Vaart and other “young people of the year” have been English Wayne Rooney, the Argentinian Lionel messi, the Spanish Cesc Fbregas and Isco Alarcn or the french Kylian mbapp.

Fans can vote for their favorite on the “Tuttosport” website in a list that this Thursday was reduced from sixty to forty and that will continue to be cut until there are only twenty left in October.

Among them, the winner will be decided, as usual, based on the votes of 40 journalists from the main European sports media.