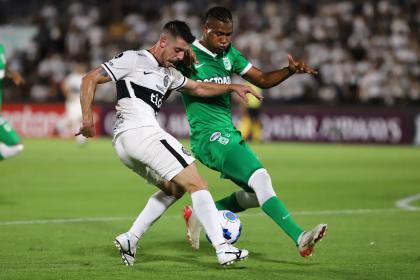 Atlético Nacional fell 3-1 against Olimpia de Paraguay, in the first leg of Phase II of the Copa Libertadores 2022. The ‘fringe’ team went ahead with a goal by Alejandro Silva, the purslane improved and tied starting the second half through by Jarlan Barrera, but towards the end, Fernando Cardozo scored a brace that left the local team close to qualifying for Phase III.

Under strong heat at the Defensores del Chaco stadium, Olimpia came out furiously to take the result, over a Nacional that had a hard time getting into the game in the first moments of the game.

At minute 7 and after a pure dribbling personal move down the right side, Alejandro Silva with a cross shot left Kevin Mier without reaction, opening the scoring for Olimpia from Paraguay driven by a full stadium, on a hot night in Asunción.

After the goal, Nacional went out to find the tie with a couple of approaches from the sides. About minute 10 and after an incursion into the left sector, Álvaro Angulo fell badly in his right ankle and ended up being replaced by Danovis Banguero at minute 16.

At minute 21, an elaborate play led to Nacional’s first clear approach, Dorlan Pabón filtered the ball to the right so that Yerson Candelo crossed into the heart of the area, in which Banguero headed poorly and the rebound was not captured by Jefferson Duque, saving the local set.

Two minutes later, Derlis González from the left had the second, but his shot went slightly wide of the goal guarded by Kevin Mier. Nacional responded with a shot by Dorlan Pabón that hit the vertical right and Daniel Mantilla failed to connect the rebound.

About minute 33, a pass by Yerson Candelo from the right sector left Jarlan Barrera in the heart of the area, but the samarium could not define clearly and handed it over to goalkeeper Alfredo Aguilar.

Nacional kept insisting on the local goal, Daniel Mantilla at minute 38 had the tie with a mid-distance shot, but it went wide by centimeters. At 40, Dorlan Pabón sent a shot from medium distance that he hit on the right vertical, after Duque interfered in the trajectory. Olimpia answered in the 42nd minute with a shot by Richard Ortiz that passed near Mier’s goal.

In the complementary stage, Yerson Candelo left and Hayen Palacios entered, the right side had finished the first half with physical discomfort. At the minute of play, Jarlan Barrera tied the game, after an elaborate play between Dorlan Pabón, for Daniel Mantilla on the left sector, the former La Equidad hooked and left the ball for Jefferson Duque, who saw Jarlan Barrera better placed so that push the ball into the back of the net.

Olimpia had its first arrival after five minutes with a shot by Richard Ortiz that passed near Kevin Mier’s goal, the fringed team had lowered their high pressure and control of the ball. As the minutes passed, the game lost intensity and depth, focusing the game in the center of the field.

At minute 36, Fernando Cardozo put Olimpia back on the scoreboard, the player took advantage of a ball far from the rival area and with a powerful shot from his right leg, he sent the ball to the upper right corner of the goal, unleashing joy for the Paraguayan fans, who had lowered their spirits throughout the second half.

In stoppage time and after a collective move down the right side, Cadozo again scored from an open goal and hit a withering blow against a Nacional team that did not take advantage of its best moment of the game.

The second leg between Atlético Nacional and Olimpia de Paraguay will be next Thursday, March 3, at 7:30 p.m. at the Atanasio Girardot stadium in Medellín. The winner of this key will face in Phase III, against the winner of the key between Millonarios de Colombia and Fluminense de Brasil.

Olimpia beat Nacional 3-1: a ‘miracle’ for the second leg in Medellin