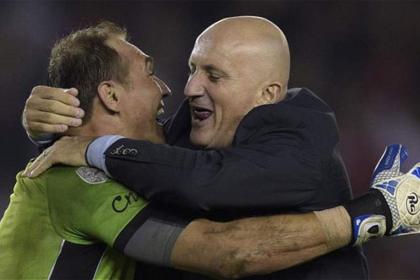 A South American great changed his scene and presented his new strategist for 2022.

Pablo Repetto, who had been working abroad since 2012, returned to Uruguay to become the new coach of Nacional, replacing Martín Ligüera.

The coach signed his contract this Thursday and was presented at the Gran Parque Central, the stadium of the tricolor team, where he received the shirt of his new team from the president, José Fuentes. Minutes later, Repetto gave a press conference in which he highlighted “the great illusion” that he has to be able to achieve all the objectives he set for himself and also to be able to fulfill “some dream”.

When asked about the performance of his teams, Repetto replied: “I like intensity, intense teams, I think speed is very important, although you don’t just play with speed, let’s be clear.” And he added: “When we have to make decisions with highs, we will look for players with those characteristics, which are not easy, but we will look for that so that we can get closer to what we want.”

Despite this, Repetto did not give clues about possible additions or losses in a squad that will begin working on January 5 in a place to be defined. On the other hand, the coach spoke about the appointment of Diego Alonso as Uruguay’s new coach and wished him “the best.”

“I know him, surely when I am here I will call him. I hope Uruguay qualifies for the World Cup,” said Repetto, who also stressed that Óscar Washington Tabárez is “a benchmark” in many things.

In 2016, Repetto guided Independiente to the final of the Copa Libertadores, in which he eliminated River Plate at Monumental and Boca Juniors at La Bombonera, before falling in the final against Atlético Nacional. Precisely on the Antioqueños, the Uruguayan DT has sounded several times to direct them, but in the end his arrival could never be specified.