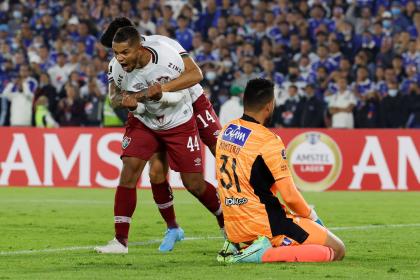 Millonarios could not maintain the advantage, the entry in the first half was ideal, but the expulsion condemned Alberto Gamero’s approach against Fluminense, who took the advantage 1-2 in the first leg of the second phase of the Copa Libertadores .

Millonarios entered with criteria, trying to impose the conditions from the start, taking the ball, given the clear intention of Fluminense to try to protect their goal. As a result of this, he showed variants from the scheme, having Felipe Melo as his main bulwark in the defensive aspect.

Those of Gamero were aware that the space provided by Flu should be used. And they do it like that. Long kick by Álvaro Montero for David Silva to receive, in combination with Daniel Ruiz, who enabled Sosa, to define before the passivity of the three central defenders, beating Fábio’s goal at minute 6.

As a result of this, Fluminense began to leave, leaving spaces that Millonarios did not take advantage of at the outset, taking into account that Felipe Melo played as a libero, all over the middle of the field.

Play followed by the goal, came the first hard match between Felipe Melo and Eduardo Sosa, a clash that ended in an attempted brawl, where the players of both teams arrived, in addition to the protest of the Brazilians for the goal, where they asked for a out of place non-existent.

The complications for the locals began to arrive with an attacking play, where Sosa entered the area, but when going for the ball, he hit David Braz. The central Darío Herrera did not hesitate to show him the second yellow card, leaving the game just after 19 minutes.

What was a starting monologue for the blues, became shared possession. Fluminense gained confidence and advanced their lines, leaving only three center backs and with their wing players open and ready to go on the attack.

The disposition of the blues varied. Losing a man in attack did not allow him to continue with the staggered pressure, so Herazo had to delay and wait a little longer for the aerial balls, where he collided with Nino, losing on several occasions.

At minute 36, Fred had perhaps the clearest, starting on the goal. However, he suffered and was injured, giving way to Germán Cano.

Fluminense found the key to the goal, in a play that started from the right zone, where Germán Cano sent a ball to the edge of the area, Bigode finished off, Montero left the rebound for Luiz Henrique, who gave the ball to David Braz, who appeared to push it at minute 43.

The pressure from Fluminense continued, reaching the goal once again, with a shot by Yago Felipe, which Montero saved. For the second part, Flu gave way to Colombian Jhon Arias, replacing William Bigode.

From the outset, no more than two minutes passed and the Brazilians had two clear goal plays, a shot by Luiz Henrique was taken by Álvaro Montero and in the subsequent play, Cris Silva finished off and the ball went under the blue goalkeeper, barely touching the Colombian arc.

Immediate response from Millionaires. Foul in the area on Daniel Ruiz, committed by Nino. The person in charge of collecting was David Macalister Silva, however, he was saved by goalkeeper Fábio, at minute 49.

Back and forth, from then on the match began, where Fluminense began to leave more space than usual, both teams showed part of their offensive proposal.

Millionaires began to move the bank, letting Diego Herazo out, so that Jader Valencia could enter. While in Fluminense, Felipe Melo left, giving way to Ganso. In addition to taking out the side Silva, so that Pineida could enter at minute 64.

The passing of the minutes showed the backlash version of the visit. Cano and Arias, those referenced along with Henrique.

At minute 70, the Blues had another great option to get ahead. A prepared play by Ruiz, on a free kick, so that Vega came from behind to finish off, leaving the ball in the same direction as goalkeeper Fábio.

The intensity in the final section continued to be blue. Silva enabled Daniel Ruiz in a great way, who did not define in time, before the closure of the central Braz. The ineffectiveness of the actions created by Millonarios would take its toll.

The defense-attack transitions were the key for Fluminense, Luiz Henrique entered alone, in a filtered pass, enabling Germán Cano, to put the Brazilians second at minute 76.

Luiz Henrique had the option of the third in the 79th minute, but sent the ball over the goal before Montero left. Millonarios ended up playing the attack, sending Perlaza, Guerra and Pereira to the field, while the Brazilians processed the ball, without suffering major complications in the final stretch of the game.

The second leg will be played next Tuesday, February 1, in Rio de Janeiro.

Oh Sosa! Hero and villain in difficult defeat of Millonarios in Copa