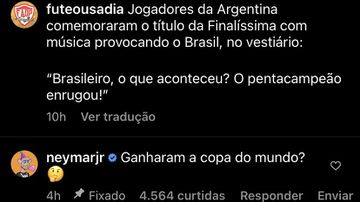 The rivalry between Argentina and Brazil is one of those that has not stopped growing over time. In what is a battle over the green every time the faces are seen, anything does not go unnoticed on one side or the other to leave some hot statement that can encourage the next confrontation. On this occasion, Neymar was the protagonist, and all this after Argentina’s overwhelming victory over Italy in the ‘Finalissima’ at Wembley.

Lionel Scaloni’s team clearly prevailed in London to obtain a title that, despite being treated as minor, had its importance due to the fact that the Albiceleste faced a European team again and the sensations that had been left in South America wanted to be transferred to the old continent. After having won the Copa América in Maracaná by beating Brazil, it seems that for the canarinha the blow still endures in what was a historic ‘Clásico’ within the continent.

After the Argentine players celebrated the title of the ‘Finalissima’, the PSG attacker is the one who has taken center stage through Instagram. Neymar, who was key in Brazil’s 5-1 victory against South Korea, spoke out on the social network by confronting what has been taken as a provocation by the Albiceleste against the Verdeamarelha team.

The Argentine soccer players, after the victory, sang in the locker room: “Brazilian, what happened? The five-time champion wrinkled! Messi went to Rio and with the Cup he stayed. We are the Argentine band and we will always support because we have the dream of being world champion. I am like that, I am Argentine, Maradona and Malvinas I do not forget. I am like that and I come to encourage you, I follow Argentina everywhere”.

Given this, the response of the captain of Brazil has been to comment on the publication on Instagram: “Did they win the World Cup?”, meeting the rival chant and downplaying the title obtained by Lionel Scaloni’s men. The Argentines, who did not stop at Wembley, also sang on the National Team bus, they also sang alluding to Brazil, so surely the next confrontation between the two countries will be less spicy.

Neymar makes fun of Argentina after the ‘Finalissima’