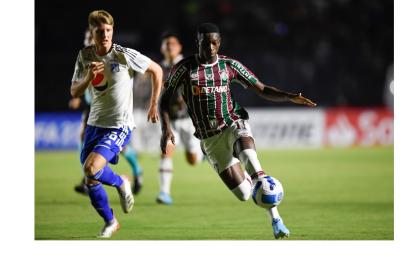 It would be a night full of shadows, like those on the Vasco da Gama field in which Fluminense took another step towards the group stage of the Copa Libertadores after overcoming, without despair or overreactions, a harmless, imprecise, innocent Millonarios.

The Brazilian team won 2-0 at home and adjusted the key in an eloquent 4-1, which gave the idea of ​​a team with sufficient resources that they did not have to use fully, against an opponent with a tiny, limited payroll like the most, far from the minimum base to compete internationally and far even from his attacking vocation, which has been his hallmark, but this time he missed the Ruizes, the Silvas, the Vegas and those who in other circumstances have resorted to rebellion. The efficient Fluminense also passed over that self-esteem.

After 5 minutes, Montero had to fly to get, with a changed hand, the first goal ball of the premises, but time would pass without the host speeding up and there would be time for a small scare from Ruiz in someone else’s fields and a header from Herazo, in a great heel by Silva in the middle of the area, which went wide.

And at 19 the clearest was the blue one: Celis’ quick and precise exit down the flank and Vega came in from behind with a shot that forced Fabio to show off to deflect it. It had to be a goal!

But it wasn’t and it almost was Lis Enrique’s suspicious attempt almost from midfield that forced Montero to stretch his almost two meters tall to scratch and deflect the ball. It is true that he did not have much to spare for Fluminense in that first stage, but he was not lacking either: a poised team, aware that the tie also classified it and sharp when Millonarios hesitated.

It was an invitation to dream the start of the second half, but once again there was a lack of clarity in the final meters, when an inconsequential Herazo had already left to make way for Jader Valencia, who would head a deflected first attempt.

But again the one who scared at 56 was the homeowner’s attempt at a succession of rebounds that Montero finally pulled out. Already at 61 the fear was staged: a great pass from Luis Enrique, a frontal attempt from Cano and Willian appeared on the rebound to beat Montero. Key 3-1 in favor of the Brazilians. Little more to add.

And what did Millionaires have in the face of adversity? The youthful Andrés Gómez arrived for Celis and Márquez for Vásquez to take risks with five attackers. It is what it is. They couldn’t ask Gamero for miracles. Not even Bertel, the first to remember the rival goal after the goal.

Fluminense, if he knows anything, is to take advantage of that thickness of the rival to sentence: he would do it, to add salt to the blue wound, a former Santa Fe: Jhon Arias, the one who had just entered, sentenced in a deep pass from Yago Felipe that was left over to all the blues. End of the movie.

In Millonarios entered Pereira, in Fluminense Ganso. Like this or clearer the difference between the templates?

The blue complied with the expectation and lost without mitigating factors in the duel against a rival who surpassed him in all aspects. The League remains, which is not little. At the international level, it is certain that, as long as there is no investment, there will be no clothes for any big party.

Neither feat nor blue seal: bitter goodbye from Millionaires to the Libertadores