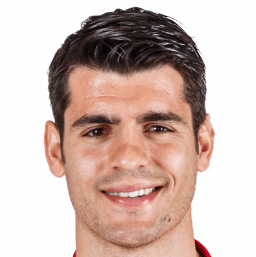 Álvaro Morata (29 years old) attends the microphones of El Larguero on Cadena SER, already concentrated with the National Team. The striker has earned a place with Simeone at Atlético and is a clear bet by Luis Enrique for the World Cup. The striker reviews the current situation, after losing the derby against Real Madrid, and looks to the future full of hope, both with the club and with the national team, where Qatar is just around the corner. Recognizes negotiations in January with Barcelona and recounts his desire to succeed as a rojiblanco, Koke’s words and the racist insults to Vinicius.

If we had won the last game, better.

Did Cholo say something to you after Sunday’s game?

No, I didn’t see him. But I imagine that he will be proud that we gave everything. As long as that doesn’t fail, people will at least be proud to be from Atlético.

In the National Team he is already a fixture…

I work with everything I have to do my best at my club and come here.

How rare is a World Cup in winter for a footballer?

You must adapt. It’s in your head, it’s impossible to remove it, but you can’t think more than the calendar and all the games we have allow you to. An entire group of Champions.

How is Luis Enrique?

Would you be a good coach for Atlético, one day?

At the moment he is doing well in the National Team. The important thing is that he is happy here and that we are all happy that he is here.

Last night we did an interview with Aspas.

He is a phenomenon as a person and as a player there is no need to explain it. He has been at a very high level for years and it is difficult for the coach to have so many options from so many players, not just Iago.

But are you surprised that Aspas is not here?

Everyone has enough to take care of their own. It is true that there is a lot of competition.

Is the atmosphere like going to fight for everything in Qatar?

It’s clear. The last competitions we were not favorites, but we face them with great enthusiasm. It is difficult for many of us to have arrived after an unbeatable generation. Equal yes, but unbeatable is a reality. We were not very far from winning a European Championship and a Nations League. We are prepared to compete well. We are a great group. When the difficult moments of squeezing and being together come, it shows.

You can see him starting with Luis Enrique… How do you see yourself?

The important thing is to see yourself here, no matter how, starter, substitute… As if you don’t play for a minute. There are many players who are world champions, they have their cup at home and nobody remembers how much they played or not. In the end it is a team. Many times, even if you don’t want to, the dark side comes to think that you can get injured, things go wrong in your club, something happens… I’ve never been lucky enough to play in a World Cup. At last I thought I was going to go and in the end there were more defenders than forwards and they chose to bring people in other positions.

Who will be the best striker in the World Cup?

Hopefully Spanish. Panda is the best in LaLiga this month. I stay with Borja who is a phenomenon and he is Spanish.

How about Atletico? Is it your most mature moment?

We had a complicated start to the season due to the calendar and there have been games that, due to specific episodes, we could have won or drawn and in the end there is also something special this year at Atlético. But there is a great group, with super committed people. There are things that we cannot control, but we go out to all the games motivated to win them. The season is long.

Who do you understand better upstairs?

With everyone. João, Griezmann, Lemar, Carrasco… There are great players, but those are more about seeing the last pass.

How does Griezmann handle his situation?

It is admirable. Always smiling. And it must be difficult to always be with a smile, helping, and that is not always seen. Fate is recognizing him with important goals.

And you would take it worse?

Maybe it’s not better or worse, or he doesn’t show it. But it is generous of him that he does not show it to the group. I don’t know how he really is, inside, but the sensations he conveys, committed and motivated, is an example for others.

Is there wear on the Cholo?

I do not think so. He has the method of it. A squad with a lot of players and options and, sometimes, having so many options makes you change your plan more, but that’s good for the team, it makes it more competitive.

How is your relationship with Simeone on a day-to-day basis?

Phenomenal. I’ve never said it so directly but I’ve never had any problems with it. I find him in the mornings taking the girls to school… Obviously he is my boss and it is a relationship of respect and I told him when I left, in a message: “Mister, know that my admiration and respect for you is incredible and It has been lucky to be able to work and experience what it is like to train with you and I hope to see you in the future”. With few people in football I have had a bad relationship. There are times with conversations of adults who seek the common good for a soccer team that is like a company.

What did Cholo answer?

I don’t remember much, it was good and he wished me luck.

Without knowing that they would meet again at Atleti…

I was on loan. Juve didn’t buy me and that possibility existed. I have seen all the Atleti games, I have followed in the group with many of those who were my teammates.

Has Koke had a bad time?

He said that he was obviously going to get involved knowing that it bothers anyone, but not because it’s Vinicius, but because the rival is celebrating a goal in your stadium. It is seen that he is even laughing when saying it. But then it is unacceptable that a 21-year-old kid has to listen to all the things that he should listen to in a field, it should not be allowed. But it happens. A situation in which Koke had nothing to do has been taken out of context.

Does it bother you that they dance?

Everyone can do what they want, dance or whatever. It bothers me that he dials. When he celebrates, let him do what he wants. I already said it, although little came out. Vini is a good boy, without malice or desire to offend.

Obviously it hurts for the simple fact that they mark you in the stadium, not for what they do afterwards. But it has been taken out of context, Koke is a phenomenon. Everything that Vinicius has gone through makes me sad and because, beyond winning or losing, it was a special day for Koke and he didn’t deserve to spend it the way he did.

Have you had problems with ultras anywhere?

Some. In the end it is part of football. I’ve had situations in the teams where I’ve been that things weren’t going well and you have to put up with it, show your face… We earn a lot of money and I guess it’s part of our job. I’m not saying it’s okay.

Why was it so clear in the summer that he would play for Atleti?

I think I have something left to do and to win at Atleti, it was what I already wanted, when I was with Koke, when I was 12, 13 years old. When I arrived this summer, one of the first days, I spoke with the coach: “I’m more mature, old man. And here at the disposal to show that I should stay. And it doesn’t matter what offer comes.”

Do you have one year left on your contract and one more? Would you like to finish your career at Atleti?

Well, whatever I say… meme (laughs). The truth is that if.

Were there options to go to Barça?

Yes, yes, there was. Last winter I had four or five very good chances. But Allegri was clear: “You don’t move from here, I want you to play with Vlahovic”. It was an effort for me, playing on the left.

In other words, if it wasn’t for Allegri, he would have ended up at Barça.

The last word, from Atleti.

But Xavi called him.

Yes. And it is appreciated. It makes one feel good.

They organize that. Sometimes you think it’s a joke.

El Cholo and Luis Enrique, without a doubt, both (laughs).

Would you have understood Cristiano dressed in Atleti?

If you score with Spain, will you dance?

Nerd. I dance very badly. But sometimes I have also danced celebrating. Last year, with Kane, an NFL dance that he tricked me into doing. Regrettable.

Morata: “I have something left to do and win at Atleti”