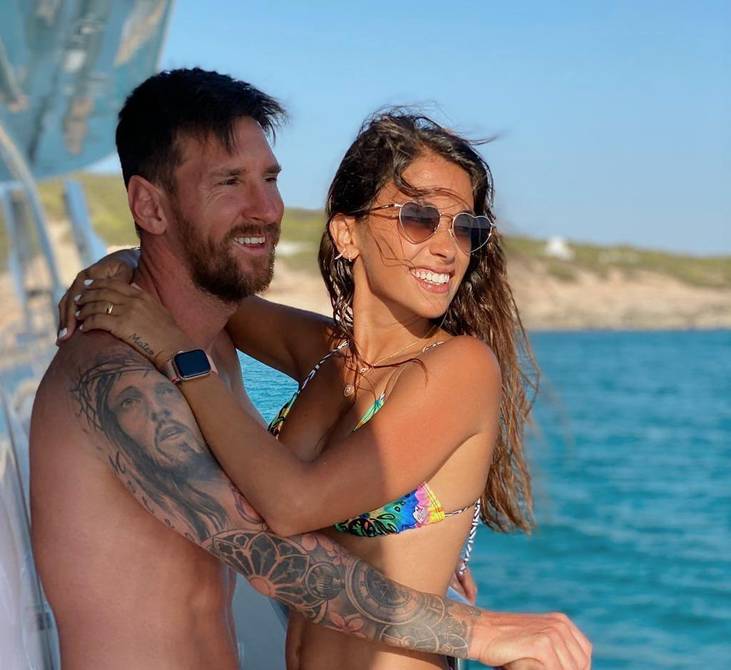 The Argentine footballer is known for his stability with his wife, while the Brazilian makes headlines for the couples with whom he is related.

Soccer and love seem to go hand in hand. In the international media, many are the footballers who make headlines for their constant love affairs, but few are those who maintain a stable couple and family.

The Argentine star Lionel messi He is a man who is not only dedicated on the court, he is also persistent and careful in love. Proof of this is his relationship with his wife Antonella Roccuzzo, whom he has known since he was 9 years old. Their strong bond was again captured by the media during the reception, in his hometown, of his emotional wife, who jumped into his arms to kiss him after the Copa América victory against Brazil.

Fate brought them together at an early age and their bond resembles those in soap operas and romantic movies. Both were born in Rosario (Argentina). They met through a cousin of Antonella, Lucas Scaglia, who played in the lower categories of the Newell’s Old Boys team, which had signed Messi in 1994.

The friendship between Scaglia and Messi gave way to sharing a vacation in Mar del Plata, on Punta Mogotes beach, where the couple finally met when they were just 9 years old. The childish love that he felt then the flea (as the athlete is also known) he kept it a secret, and at age 13 both took different paths due to Messi’s trip to Spain to sign for Barça.

United by a tragedy. That was how Antonella and Messi saw each other again. The death of her best friend in a car accident led him to travel from Spain to Rosario to offer his support. At that moment, the connection between the two was undeniable. They did not part again. They began a courtship and he returned to Barcelona. Their relationship was kept secret until July 2007. In January 2009, he made their romance official when asked in an interview if he had a girlfriend. So she was 20 and he was 21.

Before the 2010 World Cup in South Africa, Antonella had already established herself at Messi’s home in Spain. It was in June 2012, after the goal he made with the Argentina team against Ecuador, when the news of the pregnancy of Thiago, his first child, arrived. From there came Mateo (in September 2015) and Ciro (in March 2018).

The couple married in an exclusive ceremony on June 30, 2017, in their native Rosario. The link was attended by great football personalities, such as Gerard Piqué (who attended with Shakira), Ángel di María, Dani alves, Neymar, the Kun Agüero, Samuel Eto’o, Ezequiel Lavezzi, Carles Puyol and Xavi Hernández; and it was covered by more than 150 journalists who had to be accredited to do so.

Neymar, a heartthrob of the digital age

Neymar da Silva Santos Júnior, born in Mogi das Cruzes, in the state of São Paulo, always keeps the media in suspense for his alleged romances and love affairs. Several names appear among the exes with whom he has been related and linked.

Carol Abranches, Patricia Jordane, Bruna Marquezine, Moraima Quintana and Carolina Nogueiro Dantas are some of the women with whom he has maintained — and has been linked, some of them unconfirmed. Nogueira Dantas, however, was the girlfriend with whom he procreated David Lucca (2011) and with whom he maintains a cordial treatment for the little one.

Natalia Barulich, who was the girlfriend of Colombian singer Maluma, is another of the beautiful women who have been close to him. They were linked after they appeared together on the cover of a magazine, however, she denied the rumors by assuring that there was only a great friendship between them.

The model and DJ said in an interview: “He’s a great friend, I don’t know why the media thinks we’re together. I have a lot of respect for him, he’s great and I always see him when I’m in Paris, when I’m in Europe. We have a great relationship, but it’s not what everyone thinks. “

Now he is romantically linked with the Argentine singer Emilia Mernes, with whom he exchanges messages publicly on social networks, without this confirming a relationship. Mernes, 24, is also a model and dancer, and is known for having been one of the members of the Uruguayan group Rombai. (AND)