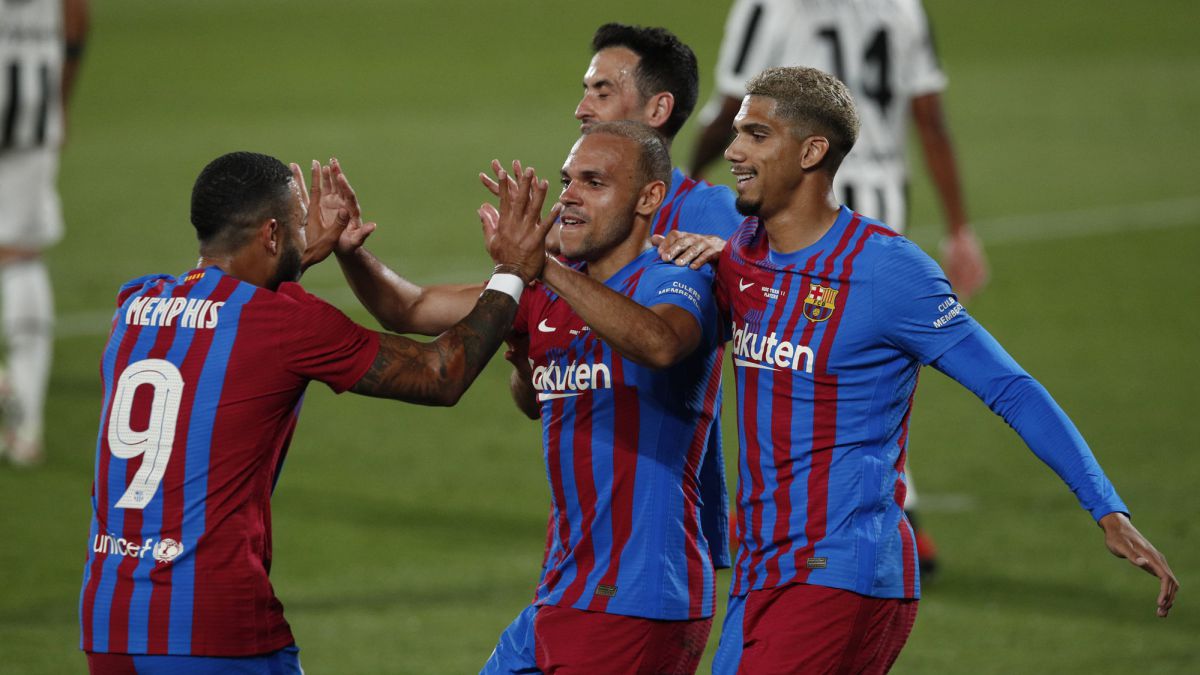 Memphis, Demir and Riqui, who are right now the burning nails to which a lost, shocked and orphaned culé hobby grabs, they were in charge of alleviating the duel that Barcelona is experiencing after the trauma of Messi’s departure. The day that began with funeral airs and tears and that could be complicated by the threatening visit of Cristiano, ended with a glimmer of hope. They beat Juventus 3-0 and Koeman’s team took the first step to recover.

The Gamper was that traditional appointment in which the Barcelona fans wondered optimistically what it could be in the immediate future, a day of illusion that was used to be summarized in the mythical phrase of “aquest any si”, with which the partners naively left the stadium on a summer night. This Gamper looked much worse at the beginning. The downturn caused by the departure of Messi, officiated hours before, drew a Gamper that instead of wondering “what are we going to be?” he wondered “what is going to become of us?”

But football is an illusion and moments and it must be recognized that the Blaugrana team’s starting effort, that name by name in the starting lineup seemed clearly inferior to the cast that Juve raised, encouraged the staff.

Koeman’s team cannot be denied the endeavor. pencan at the piece rate and Memphis helped to regain the smile and forget penalties with a goal in the third minute of the game assisted by Demir, an 18-year-old boy who has won a position in the starting team of Barça with the same conviction that Pedri did a year ago.

Demir was a thunderbolt in the first half, but please don’t be tempted to compare his appearance with Messi’s in the 2005 Gamper against the same opponent. It would be the easy resource, too easy. Like the divorced man who goes out at night for the first time after his tragic breakup, and after the second drink he believes that he has found the love of his life again. Things don’t work that way.

Barça was a pressing chaos that, on the one hand, pressed a lot in the opposite field and, on the other, continued to give a lot of inconsistency in defense. Neto had to refuse, because to stop, he did not stop a single one, several shots from Morata and Cristiano and the rush to correct positions in the rear were as praiseworthy as they were urgent.

In attack, haste was also a double-edged ally. With the 1-0 score, Barça scored two goals that were annulled for offside. The first because Griezmann rushed before Demir scored; the second for an offside badly indicated to Braithwaite that Griezmann sent to the network. Beyond these plays, the Barça went to all chestnut in attack and in defense. It remains to be seen how long this argument lasts, which seems to be the main one for the next course.

Koeman’s troops are not numerous. Kun did not appear at the party, Coutinho only appeared in the call and the recoveries of Ansu, De Jong and Dembélé are more than urgent.

In the second half, Allegri changed to half the team and introduced six changes (one of them Cristiano) while Koeman held on with what he was wearing, a preview of what could be the start of the season for Barcelona fans.

Among those who left the Turin bench, Chiesa highlighted, that as soon as he entered the field, he made it clear that it was going to be a toothache for the Catalan defense. In five minutes, Neto already had to use himself thoroughly.

Barça was going through some difficult minutes at the beginning of the second half, but then Koeman’s team made an argument that seemed forgotten: a goal from a corner. In the first approach of the Blaugrana team, Memphis took a corner and the Danish entered like a train to, with the collaboration of Perin, score the second for Barça.

Everything seemed to be going well in the Blaugrana side and the fans seemed happy until Koeman moved the bench at game time and gave entry to Umtiti. It was the moment in which the atmosphere soured and the boos appeared. Clearly, it is the target of the frustrations of the last week, a problem, because to lift this situation you have to have the mentality of Rafa Nadal.

Koeman gave minutes to all the players he had on the bench, including Collado, except for Peña, in a clear signal that Neto is staying and Pjanic, in a clear message, that the Bosnian is leaving. Nobody took advantage of them better than Riqui Puig, who closed the scoring with a third goal that makes the worst day that Barça fans could dream of did not end worse than expected. Faced with a disastrous day, the team complied and showed their face, which is the maximum that can be asked for now.