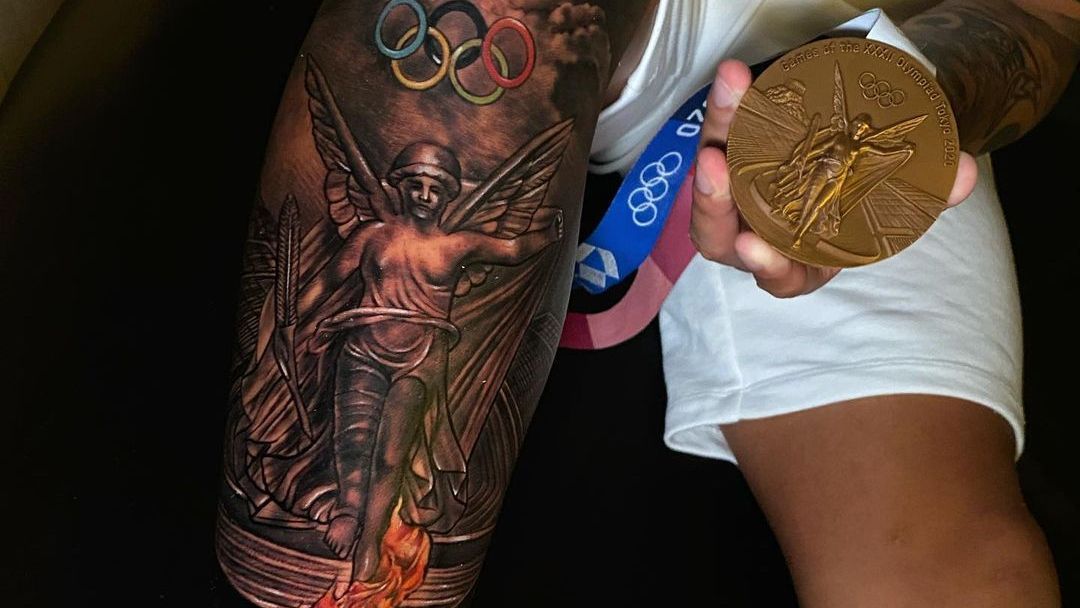 One of the Olympic medalists in Tokyo, Alexis Vega showed off his tattoo where he portrayed the bronze medal and on ESPN Digital we tell you the story of Jaime Abarca, the artist of the work

The Chivas forward, Alexis Vega, had to endure an eight-hour session to have on his leg the possibility of seeing reflected a tattoo that will remind him for the rest of his life of obtaining the bronze medal achieved in Tokyo 2020, a design that was created by the tattoo artist, Jaime Abarca.

Via telephone he told ESPN Digital How was the work he carried out with the Guadalajara footballer, since the player’s own desire was to occupy half a leg and have the medal captured.

“He wanted to represent that feeling of having won and he asked me for the medal. We saw the medal, but he told me that he wanted to fill his entire leg and this is more than my job. Hence, I asked him what he wanted, we talked if he wanted The pet, he said no; then the subject of the flame, to that he said yes. As the medal has an angel, because there the idea was to put the sky in the background, the rings, the word of Tokyo 2020 and all these details are to fill the half leg, “he said.

With seven years of experience, Jaime has become the Chivas tattoo artist without looking for him, since players such as Dieter Villalpando, Alexis Peña, Raúl Gudiño, Alexis Vega and soon Ricardo Angulo have passed through his hands.

“You can say yes (I’m Chivas’s tattoo artist). There was a moment that detonated with Dieter, Alexis Peña, Gudiño, Alexis Vega and they started and right now I’m talking to Angulo to get his tattoo done. He is a father, because many people follow them and they are special opportunities, because as artists they give us the opportunity to speak and we do not have a voice in networks or others and people. It gives me goose bumps and excitement, ”he said.

With seven years of experience and being an artist since he was young, he mentioned that the first player to go through his tattoo machine was Ricardo Centurión and since then he has had the opportunity to work with other players, including Cruz Azul midfielder Roberto Alvarado.

“The first player I tattooed was Ricardo Centurión (former Atlético de San Luis player), he invited me to his house to tattoo him. It impacted me, because there I learned about the lifestyle of a player. Entering that soccer player bubble, fame and when you get in the middle you try to digest everything, so that it does not shock you. When I was there, it is when players began to see my work, then Piojo Alvarado, has all the leg made by me, his chest and he stayed as a friend, “he declared.

“I worked with Alexis for eight hours, but before that I have treated several players and I have that process with them and it becomes difficult for them to gain that confidence, because it is their skin and their body. Al Piojo, Angulo and several already trust me ”, he added.