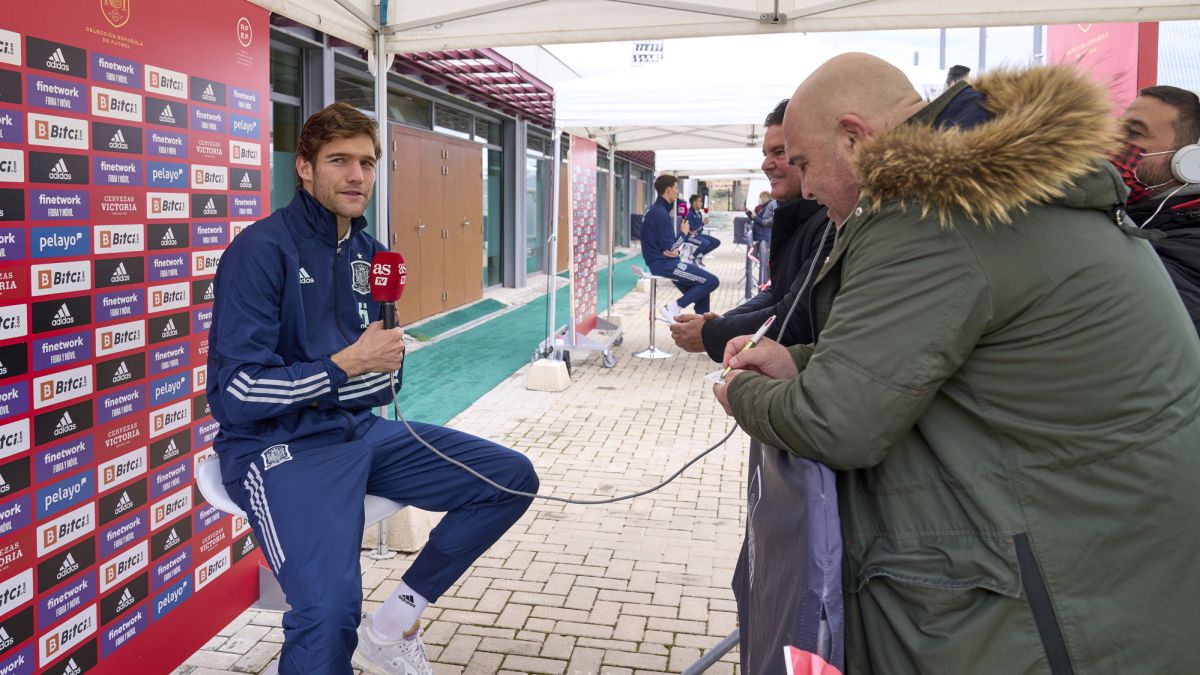 Marcos Alonso Mendoza (Madrid, 1990) grew up in the Madrid academy. From Castilla he emigrated to England and from Bolton he ended up at Calcio, where he broke it at Fiorentina after a year on loan at Sunderland. From Florence he moved to London. Chelsea paid a good transfer. In the United Kingdom he is considered one of the best full-backs in the Premier League. A pleasant conversationalist, always with a smile, Marcos Alonso talks to AS about the National Team and the Champions League quarter-final against Madrid.

Luis Enrique declared in the penultimate call that he had made his most unfair decision by leaving Marcos Alonso out after how well he had done in the Nations League Final Four. Is it difficult to get on the list?

Of course! It is the Spanish National Team and I have to focus on what is in my power, which is to be prepared in case the coach calls and in the end it is the coach who decides and who makes the call.

There are eight months left for the World Cup and this is an important call. At 31 years old, he is one of the last opportunities to play and he will give everything to be there.

When I started playing with three centre-backs, the question was whether I could play there. Now, after so much time, it is doubtful that he can play in the other. In the end, the system is the least important thing and the important thing is how one is doing. With the quality we have in the National Team, it’s a pleasure to play and they make it much easier for you. This was demonstrated in the Final Four of the Nations League where the whole team played two great games.

If he were right-handed, right back, he would practically be in the World Cup.

You never know. It is true that when he was about to debut there was a lot of lack of left backs and now there is ‘overbooking’. That is good for Spain.

His advantage is his height, that in defense the National Team is just centimeters.

I am a different profile in that sense. The important thing is to want to be here and help the team.

How is the situation at Chelsea? Does it affect you that have separated Abramovich? Is it true that you have to pay for the trips?

No, so far nothing has really happened. There has been a lot of talk, it seems that they are going to force the club to be sold. We can’t control that and we have to be where we need to be and we’ve shown it in recent games with six wins in a row, which is what’s in our hands and we hope that the rest will be resolved as soon as possible.

Can the situation affect you sportingly?

Not until now. I think it will be solved soon, it seems that with the sale of the club. We are not very aware and on a day-to-day basis nothing has changed.

It surprised him what Madrid did against PSG in that tie?

I knew from before the tie that Madrid was a very dangerous team. As superior as PSG were for much of the tie, you can never give Madrid up for dead. Of course, it’s always difficult to face Real Madrid at any time and especially in a competition like the Champions League.

Well, it’s Chelsea’s turn! How do you see the Champions League tie?

We already showed last year what we are capable of. It’s a different year, another moment, but we’re facing two great teams and we’ll try to give everything to reach the semi-finals.

Who is the favourite?

I think there are no favourites. At this point, any team is complicated and it will be a beautiful and difficult tie for sure.

Let’s leave it there, at 50 percent chance for each.

Since he arrived, the team took a leap tactically and when it came to defending. We are very happy with it.

Do you prepare a lot for matches?

Yes. We always analyze the rival. But the most important thing is what we do. We always prepare the matches trying to improve in attack and defense.

This is the first meeting since 2010 in which there are no world champions on the Spanish list, does that weigh on the team?

Experience is important and having won titles can help when it comes to the World Cup, but in the end, everyone here has experience playing finals, playing knockout games. Hopefully there can be a world champion on the list like ‘Busi’ who is of great help to all young people and those of us who haven’t played in a World Cup.

I would love to play in LaLiga, all my life I have wanted to play and be here in Spain, but the circumstances have been different and not everything has depended on me. At the moment I am focused on this season and what has to be, will be.

Due to family ties, he could play in Madrid, Atleti and Barça…

Yes, yes, I have family ties on all sides…

Which would you choose now: Madrid, Atleti or Barça?

Chelsea right now. I have a contract this and one more season.

Is your dream to play the World Cup?

Yes of course. Playing in a World Cup is the dream of any footballer. When you’re little and you see the National Team and you like football, what you want is to be there. It is a goal to play the World Cup and hopefully I can be.

It is something very nice that a grandfather, a father and a grandson have been international with Spain.

Honestly, it’s not something I stop to think about much. Maybe when I have a son I’ll tell him…

Marcos Alonso: “Madrid? At this point there are no favourites”