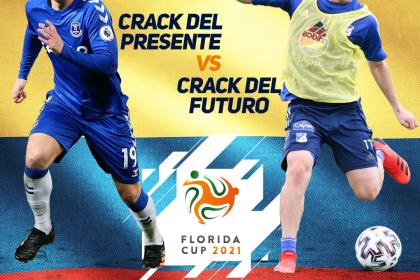 The first half ends with a partial victory for the ambassador team by 1-0.

40′- Millionaires are saved! Andros Townsend’s sensational left foot crashes into the crossbar after a defensive error.

36′- Extraordinary team play that ends with a deflected shot from Jorge Rengifo.

32′- Millonarios responded with a great individual play by Andrés Felipe Román. The bogotano left his marker on the road and took a powerful shot, but Begovic saves.

30′- The British draw is almost here! Center from the left side and an accurate header from Moise Kean that goes just over the crossbar.

25 ‘- Everton arrived with danger on the rival gantry, but the action was canceled by the hand of Moise Kean.

14′- Another arrival of the capital blue. Fernando Uribe received inside the area, turned and released a weak shot. No problem had Begovic.

6′- The ambassador goal is almost here! Elvis Perlaza crosses into the box, the ball is bouncing, Andrés Llinás finishes off and Begovic saves with just enough. Corner shot.

2′- Everton’s first arrival. Bad delivery by Andrés Llinás at the start, Andros Townsend shot from far away and Christian Vargas controlled without problems.

Starts the match! Millionaires vs Everton

You feel the Colombian heat! James Rodríguez received a standing ovation when he stepped onto the playing field at Camping World Stadium: