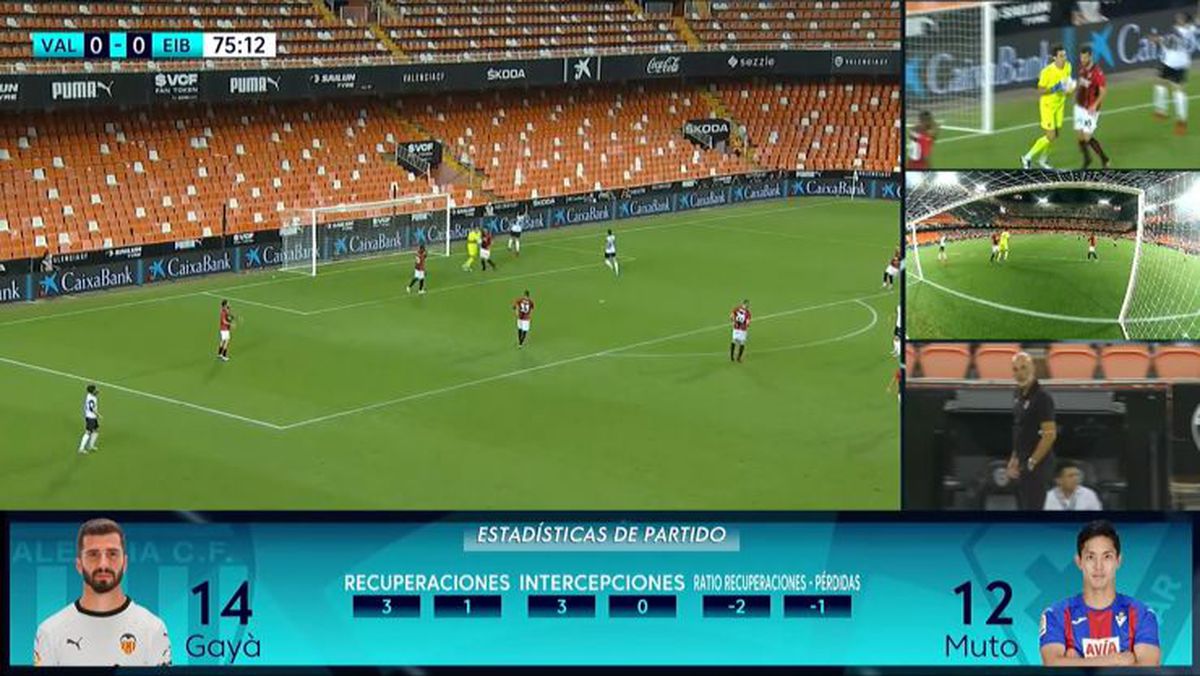 It is now possible to watch a soccer game as if you were a player, a goalkeeper, or a coach. But so is understanding the game in a different way, with advanced statistics typical of a technical analyst. Or entertain yourself with the fishy comments of the latest Internet trend, those of the celebrities of the youngest, the opinions of the casters and streamers most famous in Spain. Everything on the same screen. Soccer like never seen before. Total football.

The latest advance of LaLiga television broadcasts allows the viewer to have four different cameras to watch the game accompanied by some thirty data from Mediacoach, LaLiga’s analysis and video tool, and the opinions and analysis of experts from the network like Ibai Llanos. With the screen split, it is the fan who decides where and what to watch. A free kick from the pitcher’s perspective or as a goalkeeper? You choose.

LaLiga and Mediapro, together with Movistar, have launched a second channel to watch some LaLiga Santander matches with the screen divided into four: the main window, similar to that of the usual broadcasts, is the one that takes up the most space, but is accompanied by one that continuously follows the ball, another that shows images behind the goal and from the back of the stadium, and another that constantly attends to what happens on the benches. Melcior Soler, director of the Audiovisual Area of ​​LaLiga, explains: “We are thinking of a signal aimed at young and more technological audiences”. A true second screen. Ignacio Fernández-Vega, Director of Sports at Movistar +, points out: “It is a project that must be understood as a whole. Not only do we have more windows on the screen; we also have new narrators, with new protagonists, with new graphics. Every little detail adds up ”.

Mediapro’s director of production, Óscar Lago, who has more than 30 years and a thousand games of experience, has been one of those responsible for putting together the project. “It was both a technical and a content challenge. Making this channel efficiently, economically and technically profitable was very complex, ”he says. A team with a technical chief, a filmmaker, a sound engineer and a graphic artist works from Barcelona exclusively for this signal. “They are in contact with the director of the match to coordinate all the cameras and replays that are broadcast in each of the four windows,” explains Lago.

But one of the most revolutionary advances is, perhaps, the quietest. The least bombastic. The introduction of data and advanced statistics at the bottom of the screen offers the viewer an analysis on a par with the great sports technicians of an elite bench. Another way of understanding the matches. Thanks to the work of Mediacoach, the filmmakers have around thirty figures, each day more specific and complex, destined to provide a deeper reading of what happens on the pitch. From the number of interceptions and losses a midfielder makes to the intensity of a winger’s runs, graphic designers, who must be football experts, can choose what to feed this part of the screen, which offers live information during the games. 90 minutes of the game. “The simplest things are the ones that surprise us the most afterwards. We must add value, something different ”, adds Fernández-Vega.

One of the people in charge of the graphic design project, the 40-year-old computer engineer from Barcelona, ​​Alberto García, explains the purpose of this very specific data: “Everything you see on the screen is accompanied by a new element, which is the comments of the casters and streamers. They talk about what is happening, they do not stop expressing their opinions, and we have to have the instantaneous ability to support those comments. García, from wTVision (a company owned by Mediapro), ensures that graphic artists have the relevant software to view the data with great agility “and launch it on the air in two clicks”.

García believes that the rise in statistics comes as a result of social networks, the rise of Twitch or YouTube, and video games. “For young people, an alternative to games is Twitch. With this channel you can do everything. We are going to try to give it all in one ”, he says.

Both Soler, as Lago and García, acknowledge that the product still has room for improvement. Making it more interactive, for example, and allowing the viewer to choose which camera they want to give more importance to is one of their medium-term goals, but first they must see “how the user assimilates this new channel”. In this sense, Lago believes: “There are some technologies such as 3D that have not worked with football. This channel is being very well received. It will depend on the acceptance of the public. These innovative products always need time to improve and I am convinced that we will continue to innovate in the coming months ”. Fernández-Vega, from Movistar, says: “Our duty is to please the fans. They give us information about the use of the product. We learn and evolve ”.

During the 2019/2020 season, with no public in the stands, LaLiga launched a second channel with a virtual stand that simulated the presence of fans in the stadium, in addition to the signal that broadcast the game with ambient sound. Thus they realized the relevance and interest that an alternative signal could generate. “Our data showed that each channel had its own loyal audience,” remarks Soler, one of the minds behind LaLiga’s strategy of centralized sale of television rights. “Enriching our emissions and offering different alternatives adds value to our rights. We want to position ourselves as the most advanced competition in television broadcasts ”, he says.