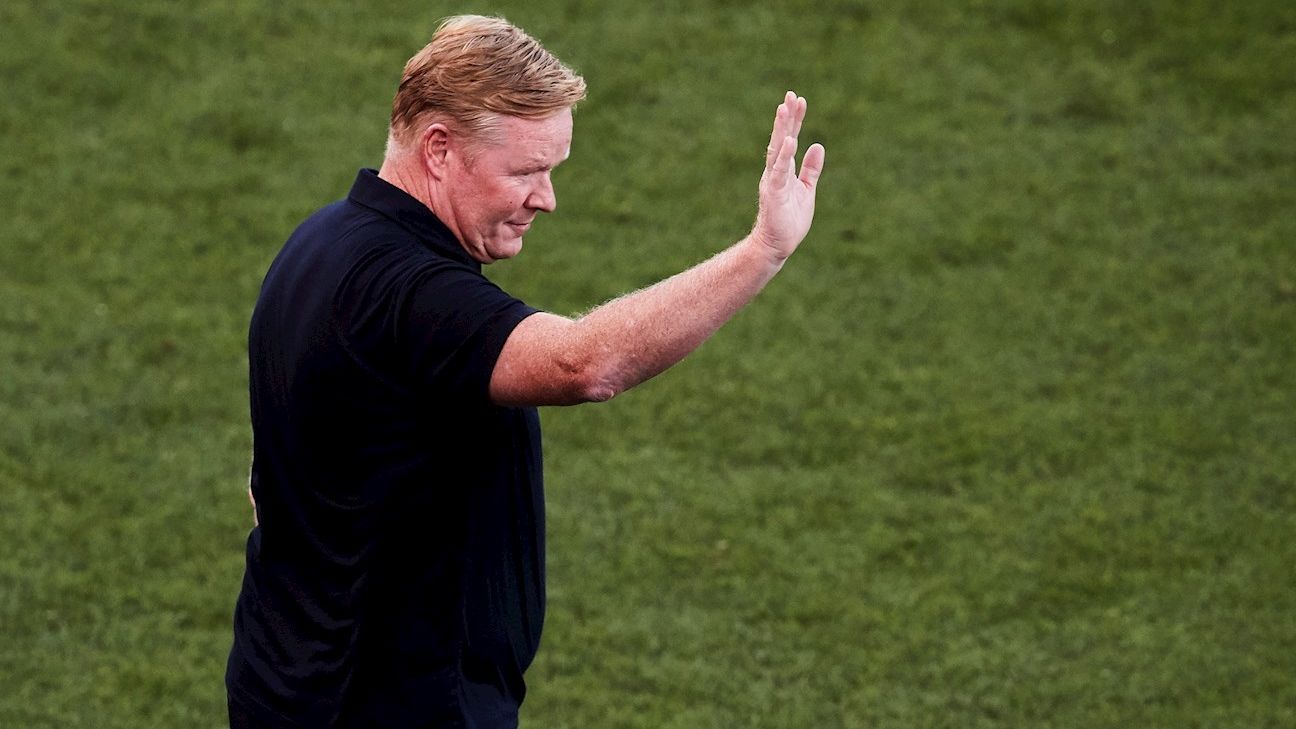 BARCELONA – Ronald Koeman begins his second season this Sunday at the helm of a Barcelona very different from the one he imagined when he closed last year in May. Barça said goodbye winning in Eibar without Lionel messi… And it begins in August knowing that he will never again be able to count on the Argentine star, whom he acknowledged to miss before proclaiming, without dissimulation, that it is time to close the page and demand from the squad “a step forward.”

“His departure is, in general, painful for everyone,” revealed the coach. “I understand what Leo has done for this club and the type of player he is. We miss him for being such an important footballer in the history of Barça “, he synthesized before parking regrets:” You don’t have to live from the past … People change teams and now we have young people with a great future who excite me. Messi it is the past and you don’t have to live from the past, you have to live for today and tomorrow and work hard to achieve what we want to achieve ”, he stated.

“There has been a lot of talk about Messi and it is normal because we are talking about the best player in the world and he has shown here the effectiveness he has had and his quality to win many titles … It is normal, but on the other hand, as I said, I do not we will have more and there are other players and we have a very strong squad when we recover all the injured ”, he proclaimed, recalling that during this time“ we have had a very good five-week preseason where Leo has not been, and it is about playing, showing and have the necessary attitude. “

From here, the Dutchman revealed that he expects a lot from his team in the League … Although warning that, speaking of objectives, the Champions “is something else. We always have to think more about the League itself and in this sense we are a A strong team that we can aspire to as much as possible. Referring to the Champions League is something else because from the second round they are home and away games and I think there are teams that have won the Champions League without having the best players in the world but proving to be strong as a team. We aspire to the maximum and we must develop the team and gain confidence “.

Understanding that the collective, as a group, must take a step forward as demanded, Koeman acknowledged that there are players with special relevance from whom he expects a lot. One Memphis Depay, from whom he solved “I hope a lot. I know him well from the national team, where he has been a fantastic player for his effectiveness and what I ask of him is that he be the same at Barcelona. Memphis is very important because we have lost effectiveness without Leo and we will have to score more goals with our strategy … and with all the players, not just the forwards but also the midfielders. “

The other prominent name is Antoine Griezmann, of whom the coach reaffirmed his absolute confidence and that in this new stage he must go from being a luxury secondary to a protagonist without exception. “I love working with Antoine because he is a team player who always helps without the ball, in addition to his quality with him. He is very happy and encourages others, he is a player who, like others, has to go a step further and have more effectiveness. It will surely be more important, “he said, announcing a change in football role for him.

“There is Leo’s position, where it is a possibility for Antoine to play, which gives more freedom to the team and himself and can be an advantage for him,” he discovered.

Still, Koeman acknowledged that under the current squad circumstance it would be appropriate to reinforce the team, although he left it up in the air. “It is true that looking at the team’s positions, nowadays, we lack people at the top: Ansu, Dembélé, Agüero, Coutinho … they are players of a high quality. What we have in front of is short and that is why we have talked about being able to sign a forward, “he said, without ensuring that it could be possible.” It suits us because we have different forwards but to have more competition … But it depends on whether we can sign. From the first day I said it, each coach knows where they want to improve, but it all depends on fair play, if possible we will sign one up ”, he agreed.

He did not position himself, at least publicly, regarding the need to continue the salary reductions or to release players that the club does not have because “these are complicated questions for me because it is a club issue where what I say has to matter. the president “, without giving any idea of ​​what he expects at the beginning of the season to players like Miralem Pjanic or Samuel Umtiti.

He does have, for the moment, available to a first ‘signing’ with Memphis, by work and grace of Gerard piqué who agreed to his salary reduction to facilitate the registration of the striker and whose gesture was praised by the coach. “We know the financial situation of the club and that it needs help in every way. Gerard’s attitude should be highlighted, as well as that of Sergi Roberto, Busquets or Alba, because all those who have been here for many years want to help the club to improve the situation. It is important and it shows that they are people from home ”, indicated Koeman … Hinting that after the agreement with Piqué the other captains will continue to give Barcelona greater financial muscle.

“I am very excited to start and to be able to have 20 or 22 thousand fans in the field, who I trust will help us,” proclaimed the coach, stating that “we have a very strong team to win important things. Starting tomorrow there are no excuses, there is a game where there are points at stake and the team is ready … I am convinced that people will enjoy this team. “At the moment, he declared that his confidence in the fans is total, although in this premiere their presence is very limited and the tickets made available to subscribers have not been exhausted: “I don’t think it is a matter that they are not motivated with the club. It is vacation time, in August many are out but surely those who come will help us a lot to win the game. “

Regarding the players he may or may not have this Sunday, Koeman did not offer too many clues, although he acknowledged that there is not much to choose from. He took for granted the presence in the convocation of both Frenkie de Jong, “has trained without problems”, as of Pedri Y Eric Garcia“They have come back with great courage, they have shown that their head is at Barça and they have shown me that they are good to play.”

He also revealed the possible presence of the youthful Gavi despite the mask he must wear and announced, at last, the close reappearance of Ansu Fati: “He is recovering from his injury and has taken many steps forward. It is always difficult when but if everything goes well in two or three weeks he will be with the group. To play after the League break.”