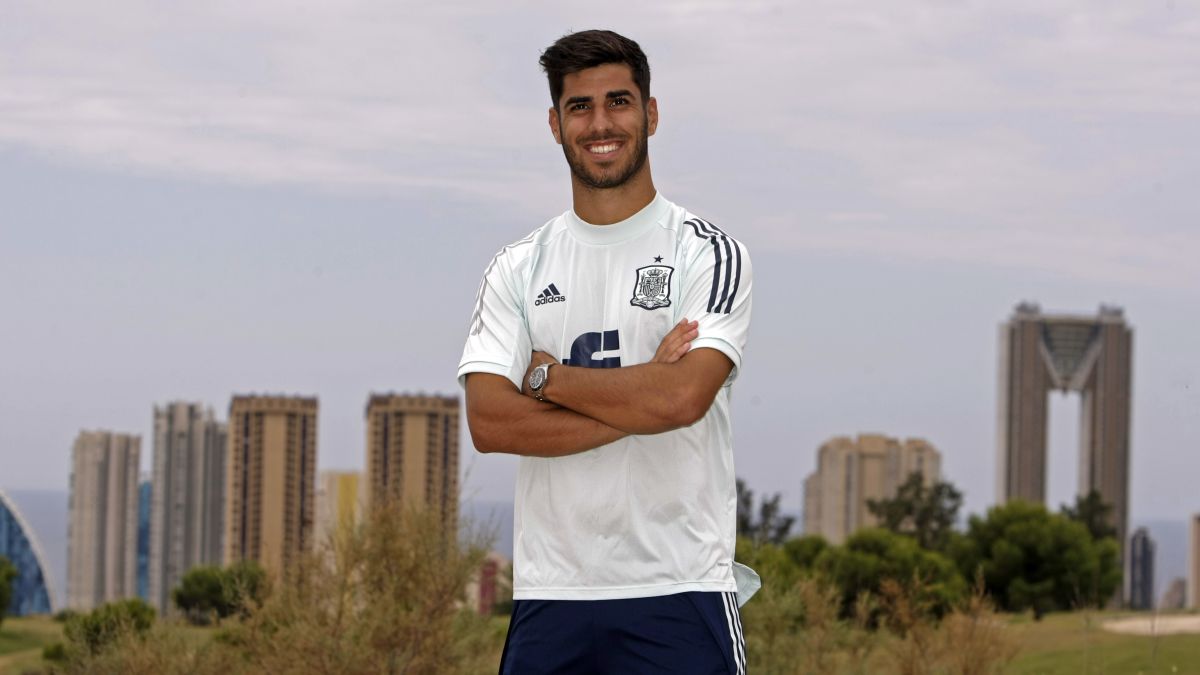 Marco Asensio (Palma de Mallorca, 1996) is one of the three exceptions for those over 24 that Luis de la Fuente has chosen to reinforce the Olympic Selection, that leaves today for Kobe (Japan) after finishing his concentration in Benidorm. The Spaniard attends AS before leaving for Japanese lands to review his physical and mental state almost two years after the serious knee injury he suffered in 2019. He also tells of his illusion to be in the Olympic event and takes the opportunity to clear any doubt that it could exist about his future.

First of all, let’s talk about his physical condition, because after the knee injury he always said that he still had a little more left to be at the top. What percentage are you now?

It has been good for me to rest these last weeks after such a long season. Now I am 100% recovered, not only physically but also in confidence, recovered from those mental barriers that appear with an injury like this. I am perfectly fine to be able to perform at 100%.

Almost two years have passed since he was injured. Is that moment permanently forgotten in all aspects?

Yes. Those are bad times that you go through after an injury like this. The following year is complicated because you have to recover the sensations, the actions of the game … This year has served me for that and from now on, what I have to do is perform 100% on the field.

This is a time of rumors, signings … Is Asensio going to play for Real Madrid next season?

You do not contemplate another alternative option to this one?

Nerd. My intention is to continue at Real Madrid, to be great here and to contribute the most. I feel that I still have a lot to give in this club.

He has always said that he wants to do great things at Madrid. Do you keep it?

As many of you already know, I am a Madridista and I feel very much a Madridista since I was little. This club, apart from being a player, I live it and I feel it a lot both in the victory and in the defeat. It is from the heart.

Zidane leaves and Ancelotti arrives, a new technician for you. Have you been able to speak to the Italian? What is your opinion of him?

“I have enormous affection for Zidane, he is someone who will always have my friendship”

Yes, I had a little chat with him. He gave me very good feelings, with very clear ideas. What am I going to say about him… He is a coach who has been in the great clubs of the world and has had very good seasons in each team. He has a lot of experience, I’m sure I can learn a lot from him.

Do you have in mind that you are an important piece in your new project as coach of Real Madrid?

Hopefully yes, I will work for it. He seeks immediate performance and I will live up to and on the level of what Ancelotti expects of me.

At the end of last season with Madrid he was doing well, scoring goals and performing well, but he had few opportunities … Did they stop him at the best moment?

In that phase of the season is when I began to find myself 100% physically, it was seen with that streak of goals that I had. The coach decided not to start me from the semifinals against Chelsea… It hurt me, because I was in a very good moment and I knew I could contribute a lot to the team, but I had to wait, there was no other choice. Soccer gives you and takes you away.

Is your relationship with Zidane the same despite that end of the season in which you had little to do with you?

It has not affected anything. Zidane and I have always had a very good relationship and we have said things clearly. I have great affection for him for everything he has helped me, not only in the field but personally. He is someone who will always have my friendship.

Were you surprised that Zidane left even though the club wanted him to continue leading the team next season?

Partly yes, you never expect a coach to leave. But they are decisions that one makes personally, he will have his reasons, I do not know them. Surely if he has, it is because it will be the best for him.

Another who leaves the team is Sergio Ramos, who has always been captain since you are a Real Madrid player. Were you surprised by their departure?

It is another similar case. I personally thought he was going to stay. If he has made that decision it will be the best for him. You will be looking for a new professional adventure, I wish you the best of luck.

Have you spoken to him since he announced your departure?

I sent him a message of thanks for all the support he has given me over the years. He is an example to follow, his career is admirable both in Madrid and in the National Team. He is an example for any young man like me.

In Madrid and in the Absolute of Spain he was always one of the youngest in the dressing room, but in the Olympic he will be one of the veterans and leaders of the group. Do you like that extra responsibility of being one of the references?

Yes i like it. I have also competed at the club and national team level in major tournaments and I believe that this experience can serve to help the youngest at these Olympic Games. Those of us who have more experience should be the example they should follow, we are all involved in this now.

Let’s dive right into the topic of the Olympic Games that are going to take place now. You are one of the three exceptions that exceed age, did you expect to be on this list?

It has been a great illusion that Luis de la Fuente summoned me. Coming to the Olympic Games with the Spanish National Team is the dream of any athlete. I am very excited, we must prepare well during these days that we still have before our debut in Japan.

Was it a stick not to go to this last European Championship? Does being at the Games make up for it?

I don’t see it as compensating one thing with the other, I would have loved to enjoy the European Championship. It couldn’t be, I had to cheer from the outside and now I have to live the Games with the utmost enthusiasm.

The Madrid, with players like Vinicius, he was not in favor of going to the Olympics. In your case they did not decide, because they were obliged to give in, but … Did you have any doubts?

No, none. Since Luis de la Fuente called me for the first time, I told him that my predisposition was total and it has been.

How important is Luis de la Fuente in his total predisposition to attend this Olympic championship?

I have known him for many years. He is a coach who, apart from being very good, has exceptional personal treatment with the players, knows how to convey very well what he wants from each one. I have lived other competitions with him during my career in the lower categories of the National Team and I know that he seeks the best for the team. He is a coach who gets the most out of everyone.

Are you aware of how special a Games are going to be? They will have very different living conditions, they will be with athletes from very different disciplines …

Some athletes who have lived this experience in other editions in the past have already explained it to me a little. They tell me that it is something unrepeatable, very special. I really want to because since I was little I have liked the Olympic Games. Being with athletes, basketball people, tennis people … Sharing moments with them will be something enriching.

They are going very well in these first days and training sessions, I think they are a very balanced group. There is a very good atmosphere. We are getting to know each other in the field and it will be important that feeling that we have outside is also transmitted inside.

Is it worth anything other than returning from Japan with the gold medal?

Our goal is gold, clearly, it must not be hidden. We have the highest ambition, we want that medal and we know that it will be difficult because there are very strong teams in the tournament. But we have to set that initial goal of getting the gold medal.

He has received a lot of criticism this year every time he had a weak game with Real Madrid. Has that lack of patience hurt you after such a serious injury?

Do you think there are people who have disappointed you in all this time?

He is 25 years old and has been at the highest level for several seasons … Is the best Marco Asensio yet to come?

Surely yes. I’ve had a great time being younger, winning things and being important. All this process that I have lived is important for me, to be more mature in making decisions and in the field, which is the most important thing.

How do you feel that you are better compared to the player you were two years ago?

I feel better mentally and physically. It is something that with everything I have lived I have learned. I feel more mature in many things and that is going to be reflected in the field.