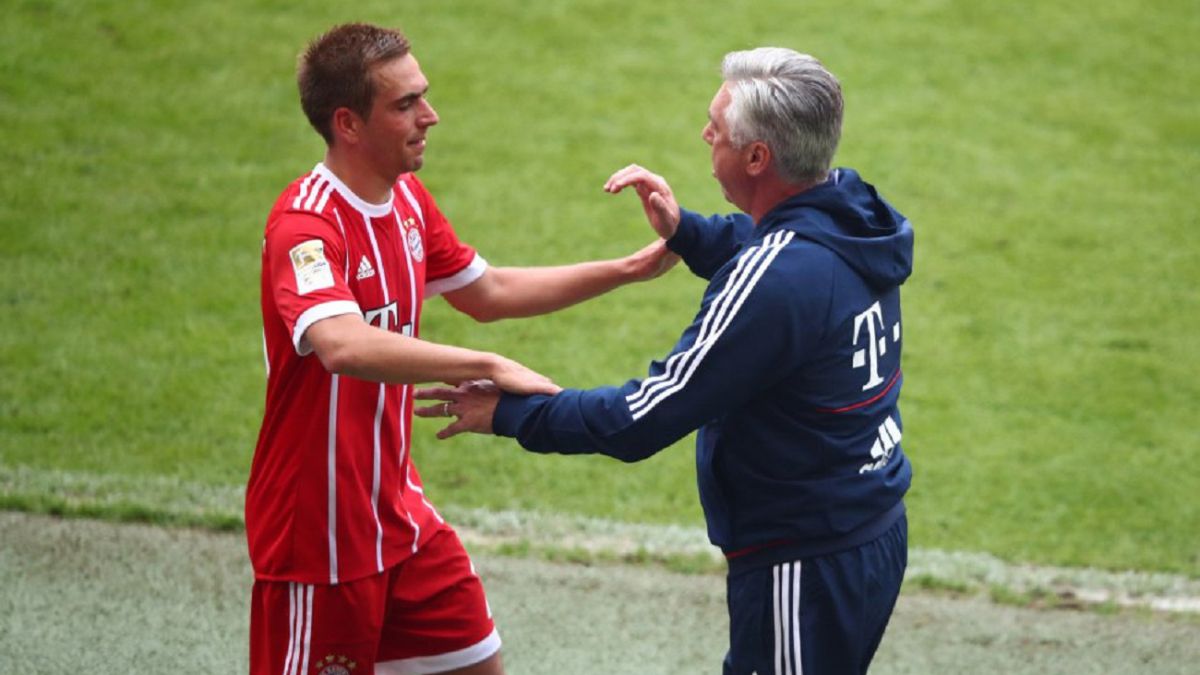 Phillip Lahm is a legend of world football and more specifically, of Germanya. The almost ‘one club man’ of Bayern (he played in their academy, but left on loan to Stuttgart in 2003) had a dream career winning a World Cup, a Champions League, eight Bundesligas, six German Cups, a Club World Cup. .. A track record that extends after a career in which he played with the best and also under their command.

He played with no one more than with Pep Guardiola, who gave another dimension to his game being a winger and playing inside and even placing him as a midfielder. The Catalan was key in his career but he was also with several of the best such as Heynckes, with whom he won the treble, Magath, Hitzfeld, Klinsmann, Van Gaal or Carlo Ancelotti, now Real Madrid coach.

Although the Italian’s stage did not last long in Munich, Lahm was delighted with the Whites’ coach who will lead his team tonight in the match against Chelsea in the second leg of the Champions League quarterfinals. These were his most outstanding statements in the column published in the British newspaper The Guardian.

Lahm’s withdrawal: “I played my last year under Ancelotti. When I told him I was ending my career, he asked me to reconsider. He told me that he could play at this level until he was 40 years old. When he realized that he had decided on me, he tried to put me in as assistant coach. But I wanted to distance myself. He loves what he does and he loves soccer and soccer players. That’s why everyone likes to play for the great coach Carlo Ancelotti.”

Guardiola’s relief: “For us it meant a change. What Ancelotti explained in a week, Guardiola did in three hours. As it happened with Guardiola, it happens with Ancelotti: you feel comfortable because you know that the coach is willing to put all his knowledge at the disposal of the team. That’s why he’s successful everywhere.”

Ancelotti style: “He is not a dogmatic coach. All his teams have a tactical level, he thinks defensively. But as a player, he gives you freedom. Ancelotti is better at managing extreme characters”

Best coach: “In a survey of who is the best manager in the world, very few would say Carlo Ancelotti, even in Italy. However, he has a unique record. He is the only one who will soon win titles in the five major European leagues and he is about to win with Madrid. There is also no coach who has won the Champions League more times, three, nor with more clubs, two. Ancelotti is also one of the seven men who have lifted this trophy as a player and as a coach.”

Performance in the club: “After a few weeks in Munich he approached me and asked me who had more to say, Uli Hoeness or Karl-Heinz Rummenigge. For him it was important to know who gave the go-ahead or not within the club”

Relationship with the locker room: “At the time when he was training us, sometimes the locker room looked like chaos. Basically, things for children. Ancelotti had to bring discipline. He was given a list of five points that we players had to pay attention to in the future. After after training, he took me aside, showed me the list and told me: “They caught me by the balls”. Then Ancelotti went to the locker room in front of the team, looked at a piece of paper and said: “I have the order from the board of directors to read you a list.” What he said, his tone, his look, expressed: “This is not part of my job, I’m not coaching a youth team, after all. But if the bosses want me to do it, I’ll do it.” Some players countered that signing thousands of autograph cards a month was too much for them. Ancelotti said: “For me it would be the same.”

The secret of Ancelotti’s success: “Those who are now wondering how it is possible to be successful in five countries with five languages ​​have to know: Footballers do many things non-verbally. And Ancelotti masters the 50 important words that are needed in this game in all languages. High-level football is international. Real, PSG, Chelsea, Bayern and Milan differ in style only in nuances. Ancelotti is the ideal solution to calmly take charge of those teams.”

Current stage at Real Madrid: “In Madrid, he surely loves the exuberant universal talent of Karim Benzema, the intelligence of the game of Luka Modric, the precision of Toni Kroos’s passes. On the other hand, Benzema’s mistakes interest him less, and he no longer wants to teach Kroos to defend. As manager of Real, he is aware that a debacle can happen, like the 4-0 against Barcelona. The genius is simply not available in every game. Ancelotti knows it and the players know that he knows it. They support each other because he’s one of them. He doesn’t lose his temper after defeats, but puts himself in charge of his players. The team and the coach are a unit, that’s to Ancelotti’s credit. The 3-1 wins against him PSG and on the Chelsea pitch showed that Real Madrid can win not only LaLiga, but also the Champions League.”