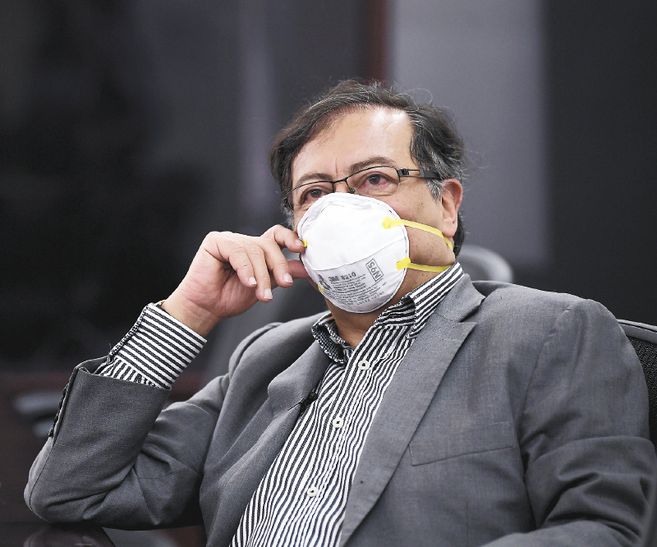 Senator Gustavo Petro participated in an event in which they publicly apologized for threats he received when he was a candidate for the presidency in 2018. The man who threatened him expressed regret for his actions. Still, the process is ongoing.

In the middle of the 2018 presidential campaign, from underground, a Twitter user wrote on his profile: “I want to make peace with the followers of the guerrilla Petro, I propose that in the next few days that our Iván Duque wins, I invite you to do a game in the stadium el campin, but since he is not going to see the ball, we are going to use Mr. Gustavo Petro’s head ”. After three years of a long legal process, the man, identified as Roberto Carlos Díaz Bedoya, offered a public apology to the leader of Colombia Humana.

Today’s senator and presidential candidate, Gustavo Petro, participated in the event, in which Roberto Carlos Díaz Bedoya excused his comments and publications. The acts of intimidation occurred when Petro and Iván Duque disputed the second round for the 2018-2022 period. Although the senator accepted the apology, he clarified that the process before the justice continues its course and a judge will have the last word.

Today, publicly in the prosecution process, one of the people who has threatened and slandered us through networks will give a public excuse and retraction.

The police will be carried out in the city of Medellín.

The threat of death by networks is a crime. pic.twitter.com/QxzSFnrpDI

The event was held at the premises of the Prosecutor’s Office in Medellín at 10 in the morning. The apologies were intended to repair the senator and make him withdraw from the criminal process. Although Gustavo Petro accepted the apologies of Roberto Carlos Díaz Bedoya, he emphasized that acts of threats through networks cannot continue to occur, so it would be a judge who would determine the future of the case.

Bedoya, who was in the company of his lawyer, expressed regret for the threat, in which he recalled a bloody chapter of the Colombian conflict, clarifying that his presence was “due to a legal requirement under threats that I raised on a Twitter in 2018 ”. In Bedoya’s statement, he stated, “I came to acknowledge my mistake and to apologize publicly and personally here to the doctor,” referring to Petro.

In context: Petro asks to investigate a twitterer who says he wants to play soccer with his head

The aforementioned Bedoya Díaz expressed that he recognized his mistake and that he did not measure the consequences of the threats he made at that time against the presidential candidate. Likewise, he said that he wanted to “invite all the people of the country to not repeat this kind of event, this kind of threats.” “I opened the doors to the Prosecutor’s Office to initiate its corresponding investigation, I never hid myself and here I am, Senator Petro,” said Bedoya. According to him, his actions were contrary to, what for him, we all seek in the country, peace.

For his part, Gustavo Petro replied that he knew the effort, time and other expenses of a process that he decided to carry out against, “one of the thousands of people who use the networks, in this case, to threaten me.” He also said that “the threat of death has become a widespread issue in the country,” because, according to what he said, these events transcend ideologies and political parties.

In his speech, Gustavo Petro made a reflection in which he expressed that his case is only one of many of violence in networks and that these behaviors not only affect an individual but also the entire society. For the senator, these acts make “the country unlivable.” “I hope this will serve you, your family and your children as a passage in the life that educates,” the leader of Colombia Humana told Bedoya, referring to the consequences of threats through networks.

It might interest you: A young man was sent to La Picota who threatened Uribe’s son on Facebook

“Never think that a person for thinking differently from you should die,” said the senator before ending his speech. “I accept the retraction of Mr. Díaz Bedoya and his public apology,” said Petro. In turn, he asked the prosecutor in the case to process the session to the corresponding judicial process, but Petro made it clear that “it will be a judge who finally determines the procedure to be followed.”