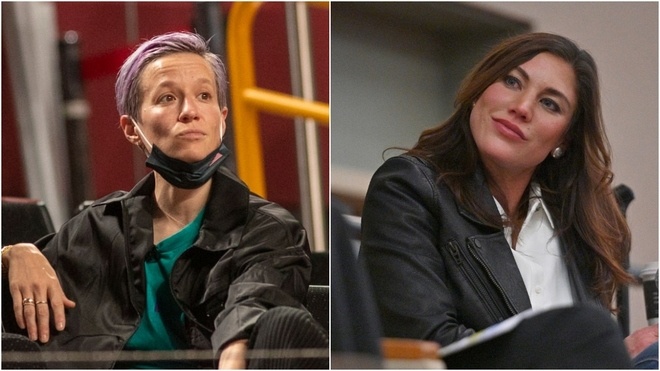 Megan Rapinoe became the main symbol of the fight for equality in the United States women’s team, in addition to his war with former president, Donald Trump, to whom he replied that because of his divisive policies They won’t go to the ‘fucking White House’ after winning the World Cup.

Their battle led to she and the rest of her companions will kneel during the national anthem, a protest that had been leading since in 2016 by supporting Colin Kaepernick in the fight against racism and police brutality. A position that was applauded by many, but that there was a different reality within the team, as revealed by the former goalkeeper Hope Solo.

I’ve seen Megan Rapinoe intimidate players into kneeling down because she wants him to protest the way she wants. “

“I’ve seen Megan Rapinoe intimidate players into kneeling because she really wants something to be protested the way she wants. But it is also ours right as Americans to do it in the way we feel most comfortable and I think that is something very complicated in the eyes of all with so many political issues that surround athletes today, “he told Goal.

I just highlighted that, despite the fact that the proposal to kneel is to seek equality in society, it also causes division because of the different views that exist in people’s way of thinking.

“Right now, what I have seen is that there is too much controversy about kneeling or not doing it. I know a lot of people against discrimination and I live in the south, in a more than conservative area here in southern North Carolina. Of course I have friends on both sides, but I think the subject of kneeling can be a very divisive thing. “

Last year, the US Soccer lifted the ban to protest during the anthem, which led to both USWNT and USMNT, kneel and wear Black Lives Matter jackets. Months later, the women’s team announced Crystal dunn that they no longer kneel and that they go on to carry out acts to contribute to the fight against racism.

On the other hand, it is not the first time that Hope shows her rivalry with Pinoe, and it is that she has pointed out on different occasions that the collective contract that prevented them from having equal pay was approved by Megan years ago and that her fight is now hypocritical.