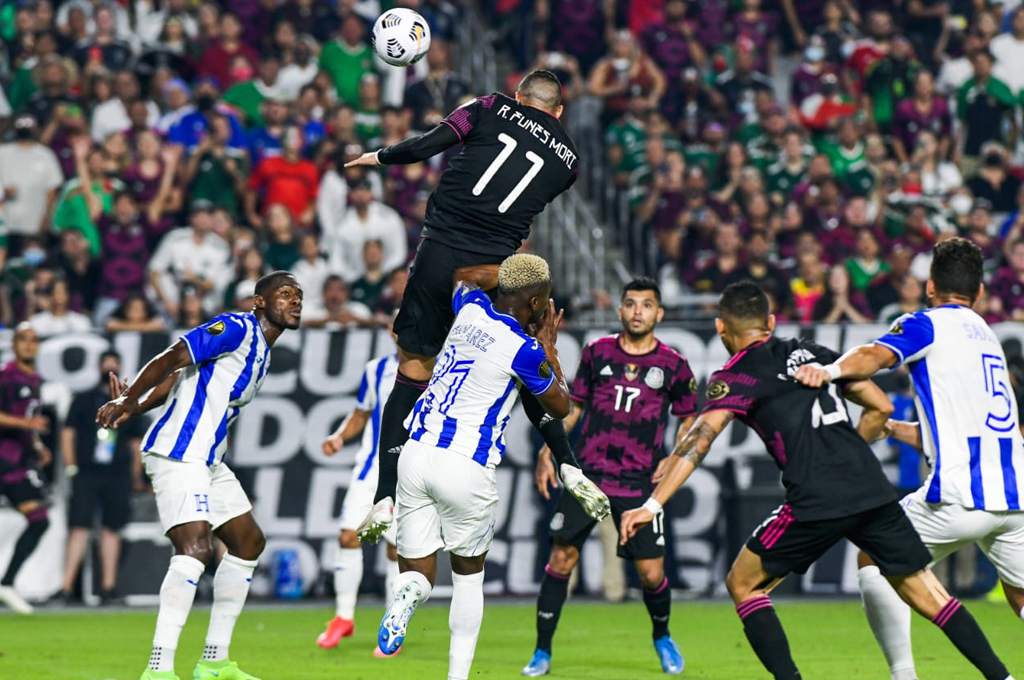 Welcome to the minute by minute of Honduras vs Mexico!

FINISH THE GAME! Honduras says goodbye to the 2021 Gold Cup after losing 3-0 to Mexico at State Farm Stadium in Phoenix, Arizona. The Aztecs advance to the semifinals and will face the winner of the Costa Rica vs. Canada.

90 ‘ The referee calls a 2-minute reset at State Farm in Phoenix, Arizona.

86 ‘ Mexico passes the ball in the center of the field. The Honduras National Team scores, but with due precautions.

CHANGES in Mexico: Carlos Salcedo and Erick Gutiérrez enter for Néstor Araújo and Jonathan Dos Santos at the 73rd minute.

CLOSE! Filtered pass from Deiby Flores to Jhow Benavídez who cannot control well and the defense ends up sending a corner to 73.

CLOSE! Héctor Moreno sends the ball to the nets after a pass from Funes Mori, but the play does not count due to an advanced position. Honduras is saved at minute 66.

63 ‘ Roger Rojas is getting ready to join the Honduras National Team. I’d be entering for Jerry Bengtson.

62 ‘ On a corner kick, Alex López escaped on a counterattack, but they ended up stealing the ball.

YELLOW for Boniek García for claims at minute 59.

YELLOW for Deiby Flores of Honduras at minute 57 for a stomp.

55 ‘ Corner kick in favor of Honduras that Alex López takes short and the Aztec defense removes the danger.

CLOSE! In a beautiful play, Bengtson in the area takes a shot that contains Alfredo Talavera. Mexico is saved at minute 53.

CLOSE! Gallardo’s center to the left that forces Maynor to push himself to the max and send for a corner when Funes Mori came to close. Honduras is saved at 51.

fifty’ Boniek’s center to the right for Alex López, but the Mexican defense removes the danger.

49 ‘ Offensive foul by Luis Rodríguez against Boniek García. The Bicolor begins to manage an attack.

END THE FIRST PART! Honduras is losing 3-0 to Mexico at State Farm Stadium in Phoenix for the 2021 Gold Cup quarters.

CLOSE! Diego Rodríguez steals a ball from the left and takes a powerful shot that forces Talavera to concede a corner kick.

40 ‘ Mexico touches the ball in midfield and the fans at State Farm start yelling “olé, olé.”

38 ‘ Bad clearance from Honduras, Herrera opens for Corona on the right and he sends a cross into the area that Orbelín connects headlong to the nets.

GOAL FROM MEXICO! At 38 Orbelín Pineda makes it 3-0 against Honduras.

CLOSE! Leaked ball for Jerry Bengtson, who fought it and ended up taking a soft shot that managed to contain the Mexican defense. Honduras tries it at 37.

YELLOW for Bryan Acosta at minute 34 for rough play.

32 ‘ Rogelio Funes Mori and Kevin Álvarez tell each other everything, but the fight was only there.

30 ‘ In a play through the center, Herrera headed back in the area and from outside the area Dos Santos took out an impossible shot for Buba López.

GOAL FROM MEXICO! Jonathan Dos Santos at minute 30 marks the 2-0 to Honduras.

28 ‘ The Honduras National Team touches the ball in the center of the field trying to manage an attack, but ends up losing the ball.

26 ‘ Center to the right of Luis Rodríguez, Funes Mori rises in the area only without a mark and sends it from head to guard.

GOAL FROM MEXICO! Rogelio Funes Mori from ccabeza makes it 1-0 against Honduras.

25 & # 39; Diego Rodríguez gets rid of the marks on the left, but ends up taking an impossible ball for Bengtson. Now the counter is coming.

CLOSE! Center from the left and Funes Mori from the right sends it to the networks. But the play is canceled due to advanced position. Honduras is saved at minute 20.

18 ‘ Corner kick in favor of Mexico. In the previous play, Alex López was leaked a ball, but in the end he ended up being disarmed.

14 ‘ Center to left that the Honduran defense clears. Mexico dominates the actions in this start of the game.

9 ‘ Leaked ball for Jonathan dos Santos and Luis “Buba” López with a clean start robs him of the ball. Honduras is saved.

CLOSE! Funes Mori receives on the right, leaves “Buba” López on the road and sends an uncomfortable shot that Johnny Leverón takes out of line.

4′ Shot by Alex López that passes to one side of the frame defended by Alfredo Talavera.

2′ Foul by Deiby Flores against “Tecatito” Corona. Free shot in favor of Mexico on the right.

1′ Ball for Jerry Bengtson and the Honduran attacker is caught in an advanced position.

START THE GAME! Honduras vs. Mexico at State Farm Stadium in Phoenix, Arizona for the 2021 Gold Cup quarters.

8:25 pm The notes of our National Anthem are sung. The meeting is about to begin.

8:23 pm The squads go out to the field. In these moments the himo de México is sung.

8:20 pm Today the Mexicans will be the majority in the stadium in Phoenix, Arizona. But Salvadorans will turn to support Honduras.

8:15 pm Mhe Honduran and Mexican teams finish the warm-up and are already in the dressing rooms getting ready to go out on the field.

8:05 pm Honduran and Mexican fans are already waiting in the stands of State Farm Stadium for the start of the 2021 Gold Cup quarterfinal clash.

8:00 pm TEN present in Arizona and Tokyo with the Honduras National Team.

7:56 pm / Fans from Honduras and Mexico have a party in the stands of the Arizona State Farm.

7:48 pm / The Honduras National Team is already conducting the respective warm-up prior to the match.

Tata Martino referred to the losses in Honduras and the mistakes he should not make.

This is what Arnold Cruz has done, who substitutes Fabián Coito for being positive for Covid.

7:25 pm / Hard news! Romell Quioto is not even among the substitutes for Honduras for this key match against Mexico.

7:20 pm / Love knows no borders, no barriers. This is how Honduras-Mexico lives on the outskirts of State Farm.

7:08 pm / The Mexico national team made its arrival at the State Farm Stadium, where it wants to secure a place in the semifinals.

7:00 pm / Mexican press regrets the contagions in Honduras and wishes the best.

6:50 pm / This is what the dressing room of the Mexico team looks like before the duel against Honduras

6:45 pm / The Honduras National Team arrived at the State Farm, where the pass to the semifinals of the Gold Cup is played tonight.

6:42 pm / It is confirmed that the Honduran team will play tonight against Mexico in blue and white stripes.

6:22 pm / The catracha squad has followers everywhere and in Arizona a pre-game party is beginning.

6:17 pm / The Honduras National Team leaves the hotel and heads to the State Farm Stadium in Phoenix, where they will face Mexico.

6:10 pm / Fenafuth confirms through a press release that three footballers have tested positive and are casualties for this match against Mexico.

Forced by its hierarchy in the Concacaf and for being the defending champion, the Mexican team will face the Honduras team this Saturday, who will arrive with high spirits to this quarterfinal duel of the Gold Cup that will be played in Phoenix, USA.