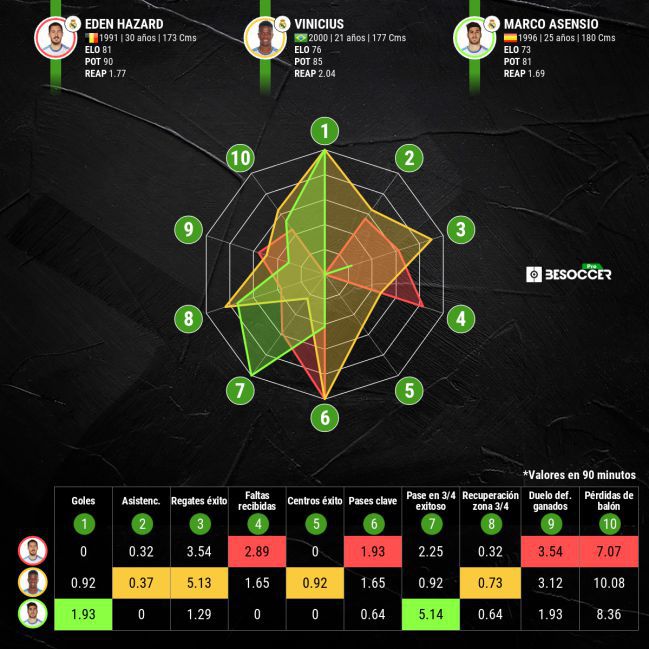 The news came an hour and a half before the start of the game. Ancelotti left Eden Hazard back on the bench. He was still betting on Vinicius on the left wing, Asensio, after his formidable encounter against Mallorca in the center, and with Rodrygo, who was a catalyst against Valencia last week, on the right wing. The Belgian would start a match off the pitch again. Connoisseurs already say that “what works, it is best not to touch it”. And after last Wednesday’s scoring festival against Mallorca (6-1), the Italian coach decided to continue with his bet, successful so far.

On a thick day of the four white attackers (Madrid shot twice on goal, one by Vinicius and another by Benzema, according to Opta data), the Belgian’s departure to the field brought some noise and excitement to the white game. He entered the field in the 73rd minute for a Modric tired of carrying balls over and over in front of the attack. And his departure had a gaseous effect that lasted until the end of the meeting. He refreshed the attack, helped to bottle Villarreal in those final 20 minutes (he gave 8 good passes out of 10 attempted), he moved to the front of the attack, sometimes getting in the way with teammates … but he wanted to put order and meaning to each white final attack. He even took a center that was finished off by Isco in which it could have been a goal for the madridistas. The Belgian is progressing well …

Already against Valencia he was one of the most outstanding, but Hazard should not stay there. So far he has only added one assist (to Benzema against Alavés), but he must take a decisive step and assume more responsibilities: this is what is required of a player of his stature. He he knows that his future in white is at stake in his performance this season, and he is not wasting the minutes that Ancelotti gives him, but he knows that he fights against three elements: first, competition within the team: the good performances of Rodrygo, the outbreak of Vinicius at the beginning of the season and the use of Asensio playing in a demarcation in which he himself acted against Valencia (behind Benzema), makes me start practically from scratch. The second is himself: To go back to being the player who marveled during the World Cup in Russia-18 and who took him to Real Madrid a year later. The third is the ever demanding Real Madrid fans: se received him with an ovation, but the white supporter is no longer screeching to see his name on the bench, waiting for an opportunity. A detail: the order of the factors does not alter the product.

At the end of the meeting, at the press conference, Ancelotti himself explained that he would have minutes in the next matches: on Tuesday, the whites face the Sheriff, next Sunday against Espanyol in Barcelona, ​​to, after the Nations League break, face Athletic at the Bernabéu and travel to Ukraine to face Shakhtar. After these four games, El Clásico arrives (Sunday 24, at 4:15 pm) in Barcelona. It will be in these four games when the Belgian passes a new test, both for the fans and for himself. But the first symptoms of green shoots begin to appear around the figure of Eden Hazard.