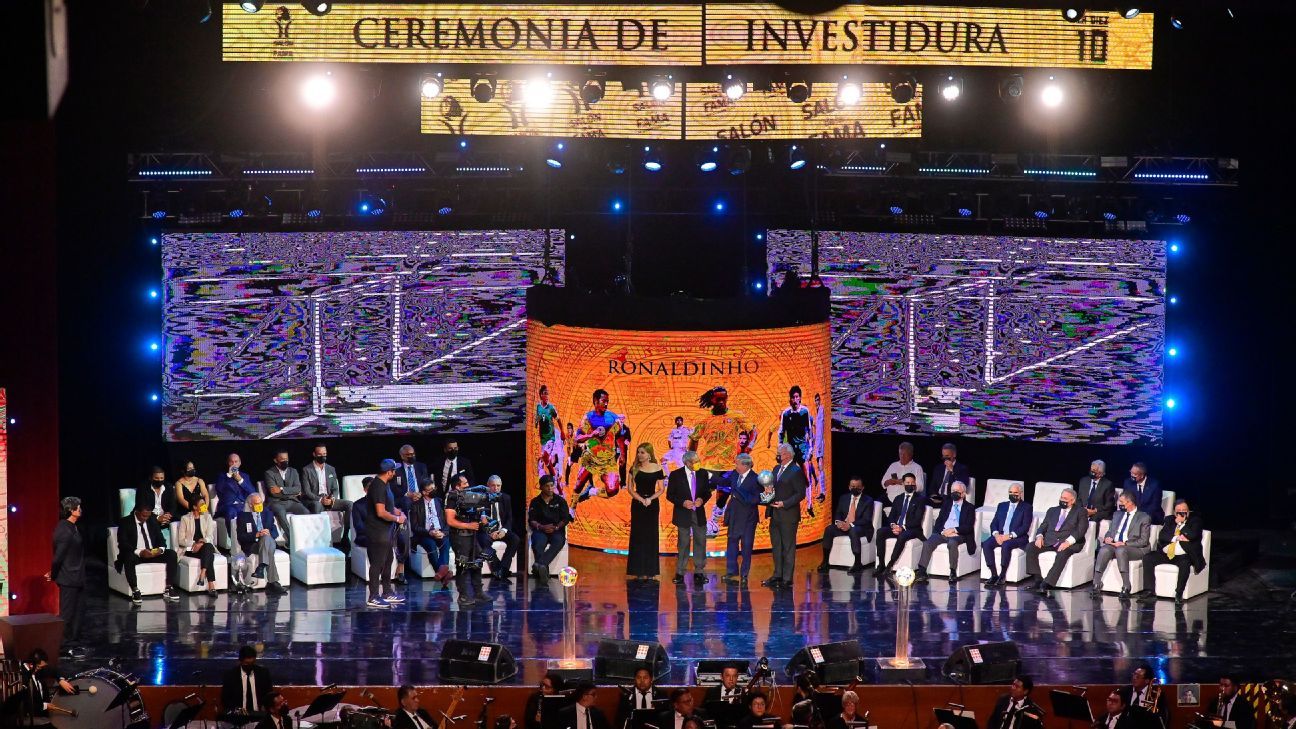 The Hall of Fame of Pachuca brought together national and international stars to celebrate his tenth inauguration after two years in which the ceremony due to the COVID19 pandemic.

The first of the night to be recognized was the three-time Mexican World Cup player Jesus of the Wallwho was introduced by coach Ignacio Ambriz.

“Thank everyone who in one way or another has made this presentation possible with all the stars who are here. Thanking you in advance for having invited me and that in the future there will continue to be this type of event with greater prominence and that in a or another way to recognize so many figures that have not been able to appear”, declared the former coach.

The gala continued with the legend of Toluca, Vincent Peredabetter known as the ‘Elder Devil’, who was born, grew up and became in Toluca so that at the end of his career he was considered one of the great figures of the Red Devils.

Pereda presented by Toluca’s all-time top scorer, José Saturnino Cardozo. “We were part of that rich history and we followed the path that history left us,” said the Paraguayan.

“I want to congratulate all these people for joining us at an important moment in our soccer life. I want to congratulate Mr. Jesús Martínez for giving Mexico a university to prepare them technically and physically. I don’t forget the reporters, chroniclers who still voted for me to belong to this group of international players. I congratulate a teammate I had in Toluca and he surpassed me in goals, Cardozo. I am privileged to be in this group of World Cup players”, he declared.

Similarly, a tribute was paid to Didithe Brazilian who was a figure with the Brazilian National Team and with which he won two World Cups, was recognized as the best in the 1958 World Cup and in his career as a player he played with the Tiburones Rojos del Veracruz.

“It is a country that I feel affection for and I am very grateful for the attention they gave me and to this day Mexico and the Mexican people were so affectionate with Brazil, with the Brazilians and well, I say Brazil, because I am Brazilian and forgetting soccer We were well received wherever we went and later with the award that God gave us and the Mexican fans, I thank you for all the attention you gave us,” he said.

The gala continued with the inclusion of three European legends, the Italian defender Fabio Cannavarothe Spanish Raul Gonzalez and the brazilian Robert Carlos. None of the three was present in Mexico to receive their recognition and traditional black jacket.

The legend of Real Madrid, Raul Gonzalez, mentioned that his work as a coach in the base teams of the Meringues prevented him from making the trip. “It is a great joy to be part of the Hall of Fame. I can’t be with you due to my coaching commitments. Soccer is my passion, my life and I am proud to be part of this family and invite young people to pursue their dream and those of us who are in this museum are mirrors for them”.

Women’s soccer lived its moment with the entry of the Swedish Pia Sundagewho throughout her career has won three Olympic medals as a coach, two of them with the United States in Beijing and London, as well as being runner-up in the world in 2011.

The night had a moment of complicity between David Faitelson, a journalist from ESPN and Cuauhtémoc Blanco, former player of América and current governor of Morelos. In the past, both experienced a controversy in which Cuauhtémoc hit Faitelson through a window. However, both maintain a good relationship over the years and tonight the journalist mentioned that he is waiting for Cuauh next year, but not as governor, this caused laughter from those present, because the analyst said that “I here I hope… I hope so.”

“I’m so sorry I can’t be with you tonight. I’m sick and I can’t travel to Mexico. Of course I would have wanted to be at this ceremony. I want to say thank you for being at the Hall of Fame. Thank you for being not only me, but women’s soccer,’ she said via video.

Maribel Dominguez She was the second female representative to enter and was presented by Leo Cuéllar, who directed her for many years in the Mexican National Team.

“It is a great honor and pleasure to introduce someone I met in October 98 along with a group of Mexican players who were looking to fulfill a dream and that was to play a World Cup in this beautiful country,” Cuéllar said. “An example not only of soccer, but of life. She is a brand new national coach who gave us the ticket to the next U20 World Cup.”

For his part, ‘Marigol‘ was blunt in saying. “Dreams come true and more so on a special and important day. This is the proof of one more dream. I want to share that we must continue fighting, working for our ideals, goals to continue giving better examples to our girls and new female generations. I would like to thank my support, she has always helped me, she gave me the courage to fight and she is my mother. To my family for always being there in good times and bad. To my colleagues, without whom I certainly would not have achieved many positive results. To my friends, Leo Cuéllar, for being my mentor and technical director, but today he represents all the coaches I’ve ever had”.

With the musical presence of Mijares it was like the gala of the Hall of Fame it was advancing. Roberto Ruiz Esparza was in charge of presenting Paul Larioswho passed away in 2019 and at the ceremony no one from his family was present.

“He dared to do what nobody did. Go out to the top of the large area, pick up balls and be a wall. He was a great man, he was essential for Puebla to win the Cup, League and runner-up championships. Without a doubt Pablo He is happy and now I say it, Pablo It is in everyone’s memory. He was the archer of the jungle,’ Ruíz Esparza mentioned.

One of the most emotional moments occurred with the induction of Antonio Carlos Santos, who with a broken voice said. “I thank God, because he gave me the gift of playing football and soccer because without him I would not be here, I would have nothing, I would not be here and for him I have everything. I thank Club América, because together we did feats. I thank the Americanist and non-American fans, because when they go out on the street they respect me and show affection. If there is a reincarnation, I want to be a footballer again.”

For its part, Oswaldo Sanchezthanked for his entry and especially for achieving the goals he forged while playing with a makeshift goal and two stones as posts.

“I was born in a popular neighborhood in Guadalajara and playing with a goal with two stones, I told them that I wanted a World Cup, to represent the National Team, an important team, and they would shout at me ‘goalkeeper, goalkeeper’. They called me crazy, because we had no influence, nor contacts, but everything was fulfilled. He took away Father’s Day, the birth of some of you, festivals, but I did it to fight and I thank you for this full life”.

The highlight of the night was the presentation of Ronaldinhoand the one who was in charge of his presentation was Rafael Márquez, with whom he shared glories in Barcelona and also faced him as a rival in France and the Mexican National Team.

“There was no one else, more than you, who could change the history of that great club. We never needed to agree or remember what we had to do. I knew I had to look for you and any recovery you made the move to look for you and instinctively He commanded the line and with your magic you controlled the stones he threw at you,” said Márquez.

The audience rose to its feet at the investiture of Ronaldinhowho was on the verge of tears and remembered that if it hadn’t been for the legends of the past and the players he watched grow up, he wouldn’t have been able to achieve success.

“I’m not one to talk much, I just had to play and have fun, but I have to thank everyone. All Mexicans receive me with great affection, my brother who came before me and played. Thank you very much for everything and I’m happy. Not even in my wildest dreams did I imagine one day going through this, being part of being next to so many legends. I always dreamed of winning titles, making plays, goals, but not going through this. Thanks to all of you, what you did for football , those who gave me the opportunity to dream and be with you,” he concluded.