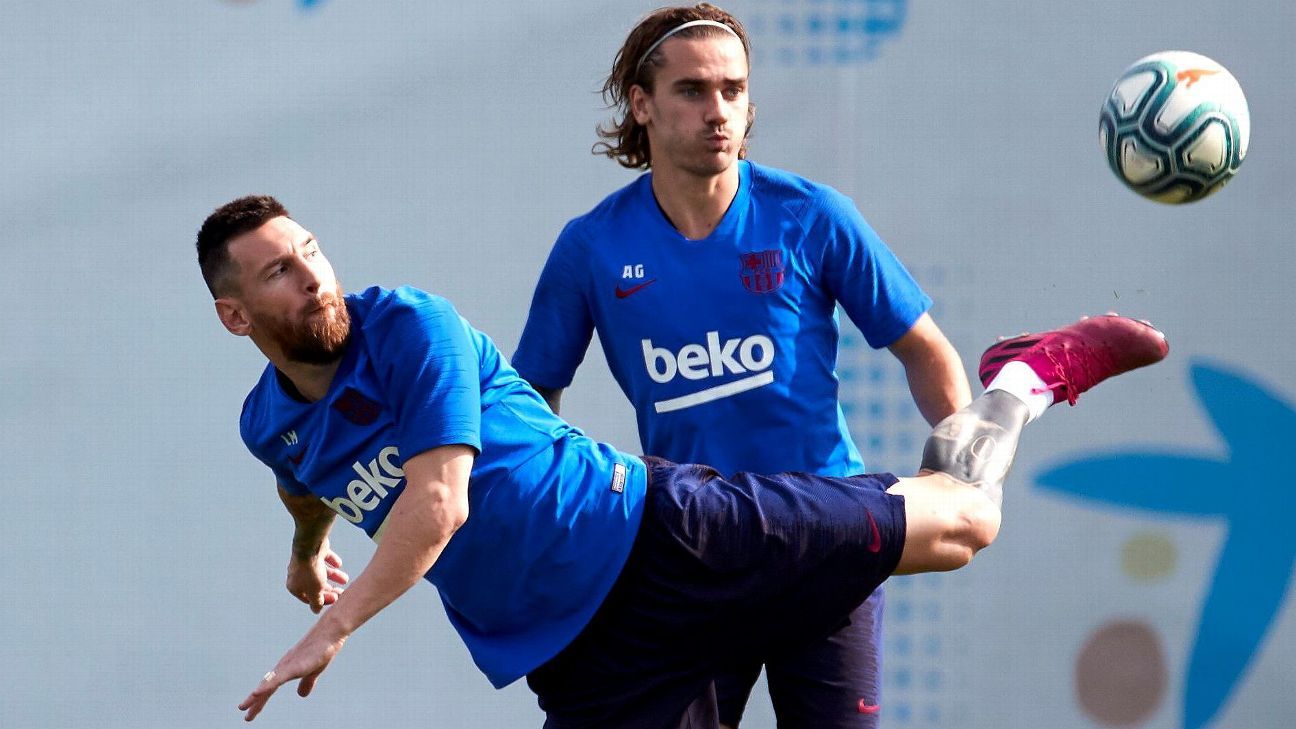 BARCELONA – Antoine Griezmann He plans to join Barcelona’s preseason on July 20 at the expense of how his future is resolved, which he is clear about his intention to fulfill the contract that binds him to the club until 2024 but in which the door is not closed to a possible way out.

Sources close to the French footballer warned ESPN Deportes that Barça has not contacted him and that any variation in his status should be studied, without ruling out any scenario.

Signed in the summer of 2019 to Atlético de Madrid for 120 million euros (to which Barça added another 15 in a marginal concept), Griezmann has been placed in recent months on a hypothetical list of transfers to catapult to the foreground in recent weeks, assuming that his departure would mean an obvious economic relief for Barça in terms of salary savings, even if a transfer below 70 million euros would mean losses in the club’s balance sheet.

“They have not told us anything from the club,” says one of the sources consulted, stating that any approach would be studied from an official communication by the Barça leaders and warning that Griezmann “has always prioritized the sporting aspect and happiness of his own over money “, assuring that at the time he” lost money “for signing for Barça and that he maintains his desire to continue at the Camp Nou.

Denying any contact with Atlético for an exchange with Saúl, “no one has spoken with us”, a possible return to the mattress club would not be ruled out by the French player, who knowing that Simeone would receive him with open arms, he does have evidence of the Interest that arouses in Europe, with a certain one from Manchester City, revealed last week by French media and not rejected by the Barça footballer’s environment.

Barcelona, ​​which on Sunday made the final transfer of Sergio Akieme Almería (where he played on loan last year) for 3.5 million euros and is close to closing the exit of Monchu to Granada (without economic benefit), he needs to significantly lower his salary mass (there is talk of about 200 million euros) to be able to register Leo Messi without risk, considered indisputable “by Ronald Koeman and with whom the club has a pending agreement to balance its numbers to obtain the approval of LaLiga.

So far, it has released about 24 million in this concept with the departures of Todibo, Junior Firpo, Aleñá, Matheus Fernandes, Trincao and Konrad de la Fuente, in addition to the Miranda, Akieme and Monchu, but it has yet to solve those considered Higher staff contracts.

In this sense, the names of Umtiti, Pjanic and Coutinho appear in the foreground, which together exceed 65 million euros in terms of salary cost. The exits of Neto and Braithwaite would mean no less than 15 million more, understanding much more difficult due to his injury a sale of Dembélé, whose gross salary is close to 20 million.

Griezmann’s cost also exceeds 20 million for Barcelona and a transfer, still losing money, does not rule out at the club for more than last week Ronald Koeman specified that he maintains firm confidence in the Frenchman, whose performance he praised last course.

Another option would be, as in the case of the Piqué, Busquets or Jordi Alba, to request an adjustment, a reduction in his salary, something that Koeman himself publicly demanded from the entire squad and that is something in which the club’s managers, with Mateu Alemany at the head, they work especially.

And it is that even though Messi has given his approval to a substantial reduction of his own contract, willing as he is to sign for half of the previous one, between 50 and 60 million euros, Barça needs to continue applying cuts urgently. And Griezmann, on vacation and waiting for events, is no stranger to this delicate situation at the club.

Marc Cucurella, Getafe left-handed winger with the Spanish Olympic team and for whom Barcelona maintains a 10 percent transfer right, is in the sights of Brighton of England, whose offer of 15 million euros was rejected by the azulón club , referring to the player’s termination clause, of 18 million, according to sources close to the operation revealed to ESPN Deportes.

The Catalan footballer, who will turn 23 this July, was signed by Getafe in the summer of 2020 for 10 million euros and Barça reserving 10 percent of what the Madrid club could enter in a future sale until the termination of his contract, in 2024. Although various speculations estimated the value of this termination clause above 25 million, the footballer himself clarified the reality of it in an interview with Radio Marca.

“I have received many rumors that my clause is 30 million and it is a lie. I want to make it clear that my termination clause is 18 million, not 30 as they have been saying out there. It comes out in many places … It is not No message for anyone, is to clarify things, “confirmed Cucurella in the first person, who knows the interest of Brighton and left any type of negotiation in the hands of his representative.

Directed by Graham Potter and classified in 16th place in the Premier last season, Brighton seeks to reinforce its left wing, in which this season Dan Burn has played as winger and that with the incorporation of Cucurella would allow the coach to recover a system of three Centrals turned the Catalan into a lane for that band, a position in which, after making his debut during his time at Eibar, he has catapulted himself to the fore during these last two seasons with Getafe.