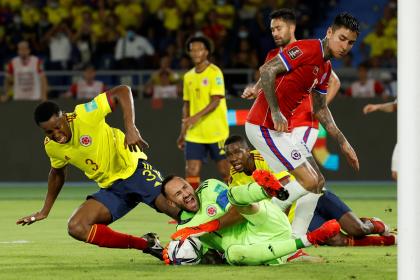 The Uruguayan Martin Lasarte He said this Monday in his last press conference as coach of the Chilean soccer team that he is not afraid “of the word failure” and that “every day we see great coaches being fired for not meeting goals.”

“I’m not afraid of the word failure. It is clear that we did not meet the objective of qualifying for the World Cup, but it does leave us a certain satisfaction that some less relevant objectives were met“said the former soccer player.

The Chilean National Professional Football Association (ANFP) announced on April 1 that they had reached an agreement with Lasarte not to renew his contract as head of La Roja after their 0-2 defeat against Uruguay. “I personally want to thank Martín. We are not going to forget that he arrived in Chile in the middle of a pandemic. There were many obstacles and it remains for a deep analysis of Chilean soccer,” said ANFP sports director Francis Cagigao at the time.

With the elimination, the red will have to face a process of generational replacement due to the decline that referents such as Alexis Sánchez, Arturo Vidal, Gary Medel and Claudio Bravo are beginning to show. These players, leaders of the so-called ‘Golden Generation’, led the conquest of two consecutive editions of the Copa América.

“A year ago I said that the national team depended on its Golden Generation to qualify. Some young players who go out don’t play or aren’t even called up, and that’s very complicated,” Lasarte said.

The red team closed their participation in the South American qualifiers in seventh place with 19 points in 18 games, with nine losses, four draws and five wins. “There were things that surrounded us in these qualifiers that affected us in some way. They made us play three away games and that can’t happen again,” lamented the Uruguayan.

The Chilean sports press conjectures with the names of at least four candidates to succeed the Uruguayan coach: from the Real Betis coach, Manuel Pellegrini, the favorite of a large part of the fans; the Argentines Sebastián Beccacece and Eduardo Berizzo or even the coach of Colo Colo, Gustavo Quinteros.

“I was happy here in the National Team beyond the vicissitudes of the task. There are many people who want to do things, collaborate and work and I think it’s fantastic. I hope there are no internal battles,” Lasarte concluded.

Goodbye to the World Cup and the National Team: ‘I’m not afraid of failure’