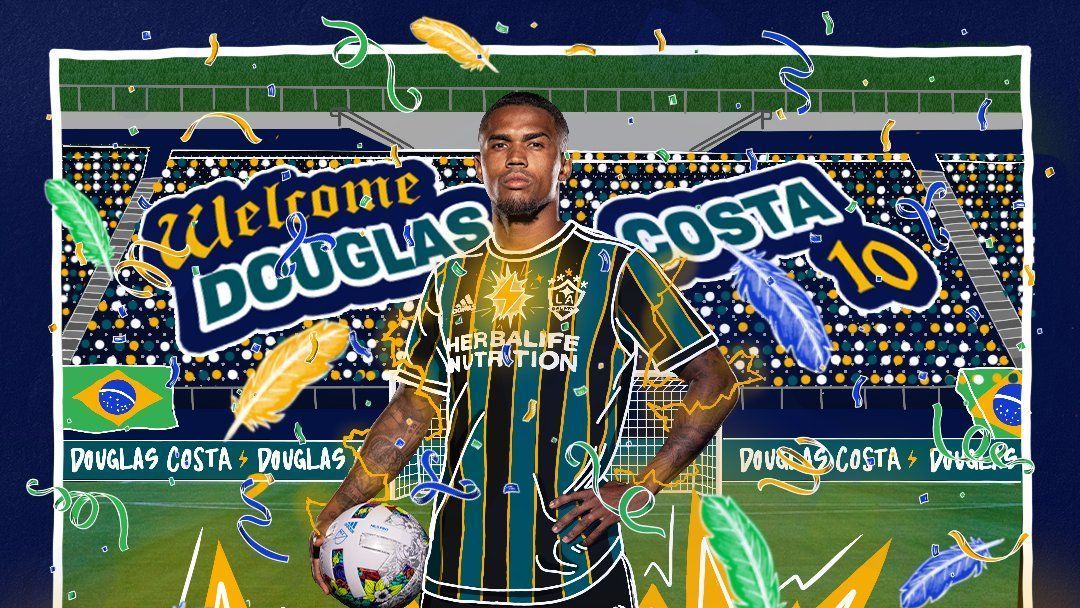 LOS ANGELES — The LA Galaxy today announced the signing of the midfielder Douglas Costa on condition of a six-month loan from Brazilian club Gremio.

Following the conclusion of his loan, Costa, who will be added to the Galaxy roster as a Designated Player and fill an international slot, will sign a year-and-a-half deal through the end of the 2023 MLS season.

Costa, 31, joins LA with more than 400 appearances and 21 trophies won in the top divisions of Brazil, Germany, Italy and Ukraine since making his professional debut in 2008 with Gremio.

During the 2021 Brazilian Serie A campaign with Gremio, on loan from Juventus, Costa added three goals and two assists in 26 games played (20 starts).

“Douglas is a world-class player and a proven champion at the highest level. His ability to create and finish will add another level to our attack,” LA Galaxy head coach Greg Vanney said. “We are excited to add him to the team as we prepare for the start of the season.”

Additionally, in 34 appearances (24 starts) in the UEFA Champions League, Costa registered six goals and seven assists, helping Shakhtar Donetsk reach the quarterfinals of the tournament in 2010.

The Brazilian international was loaned in the summer of 2015 to Bayern Munich of the German Bundesliga, where he spent two seasons (2015-17) and scored eight goals and 13 assists in 50 games played (37 as a starter).

After going on loan to Juventus of the Italian Serie A in the summer of 2017 from Bayern Munich, Costa had an outstanding season in which he registered six goals and seven assists in 46 games played (31 starts) in all competitions during the 2017-18 season, helping Juventus win the Serie A title and the Coppa Italia.

After Juventus made Costa’s loan permanent from Bayern Munich, the Sapucaia do Sul, Brazil native helped the Bianconeri win the 2018 Italian Super Cup and two more Serie A titles (2018-19, 2019). -twenty). In all competitions during his time at Juventus (2017-20), Costa recorded 21 assists and 10 goals in 103 games played.

Costa returned to Bayern Munich on loan in October 2020 and helped the club to the 2020 FIFA Club World Cup. That season, Costa scored a goal and an assist in 11 appearances (3 starts) in league matches for Bayern, helping his team win the Bundesliga title in 2020-21. In three seasons in Munich in all competitions (2015-17, 2020-21), the midfielder scored 15 goals and 30 assists in 97 games played.

At the international level, Costa has scored three goals and six assists in 31 games played (13 starts) for the Brazil team since making his debut in 2014. After being included in the squad for the 2015 Copa América, Costa played three games as a substitute, and scored the winning goal in stoppage time in a 2-1 win over Peru in the tournament’s group stage on June 14, 2015. In CONMEBOL’s 2018 World Cup Qualifying, Costa recorded two goals and four assists in eight games played (5 starts) for Brazil. Notably, Costa made two appearances for the Seleção during the 2018 FIFA World Cup, registering an assist in Brazil’s 2-0 victory over Costa Rica on June 22, 2018.