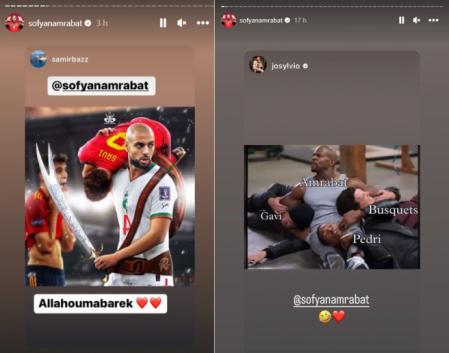 Sofyan Amrabat is one of the players in this World CupThe Moroccan, with his physical display in midfield, is proving to be a top-level player, and big clubs like Atlético, Barça or Premier League teams are already showing their interest in him. The midfielder has given an interview for Marca in the preview of the semifinals against Franceand today we come to review it in MD.

Morocco is being the big surprise of the World Cuphmade history by being the first African team to qualify for a World Cup semifinals, and tonight they have the possibility of continuing to make everyone fall in love and go to the final, before them a France that is the current world champion. “I don’t think it’s a surprise, but it is something special that we have achieved. We are the first Arab and African country to be in the semifinals of a World Cup. The results we are having in Qatar are impressive.”

On the other hand, there was a lot of controversy against Amrabat for a photo that he uploaded to his Instagram with Gavi to his shoulders, humiliating the Barça player. “I want to explain myself in that. I have my Instagram account, but there is another person who also manages it for me. The person who shared that image saw it as a joke. I have a lot of respect for the Spanish and when I heard that people did not he was liking it, I deleted it immediately. If someone got angry, I apologize in the most sincere way. When people got upset, I decided to quickly remove it.”

After his great performances, he is the World Cup player with the most recoveries, many teams have taken an interest in him, the Athletic It seems that he is in the lead: “I have a great coach at Fiorentina. I don’t like to talk about others. But yes, what Simeone does, what he has achieved… He has coached Atlético de Madrid for many years. I like his style of play. He has won a lot and I have a lot of respect for him. The players on his team are physically strong and aggressive. I like to play that way.”

And to end the interview with Marca, he wanted to remind Moroccan fans: “There are many in Spain, but also throughout the world. They are everywhere. We feel his energy and drive in the stadiums. I think all the fans from Africa and from Arab countries are with us. We are a big family and that’s amazing.”

France – Morocco | Amrabat: “I apologize if someone got angry with Gavi’s photo on Instagram”