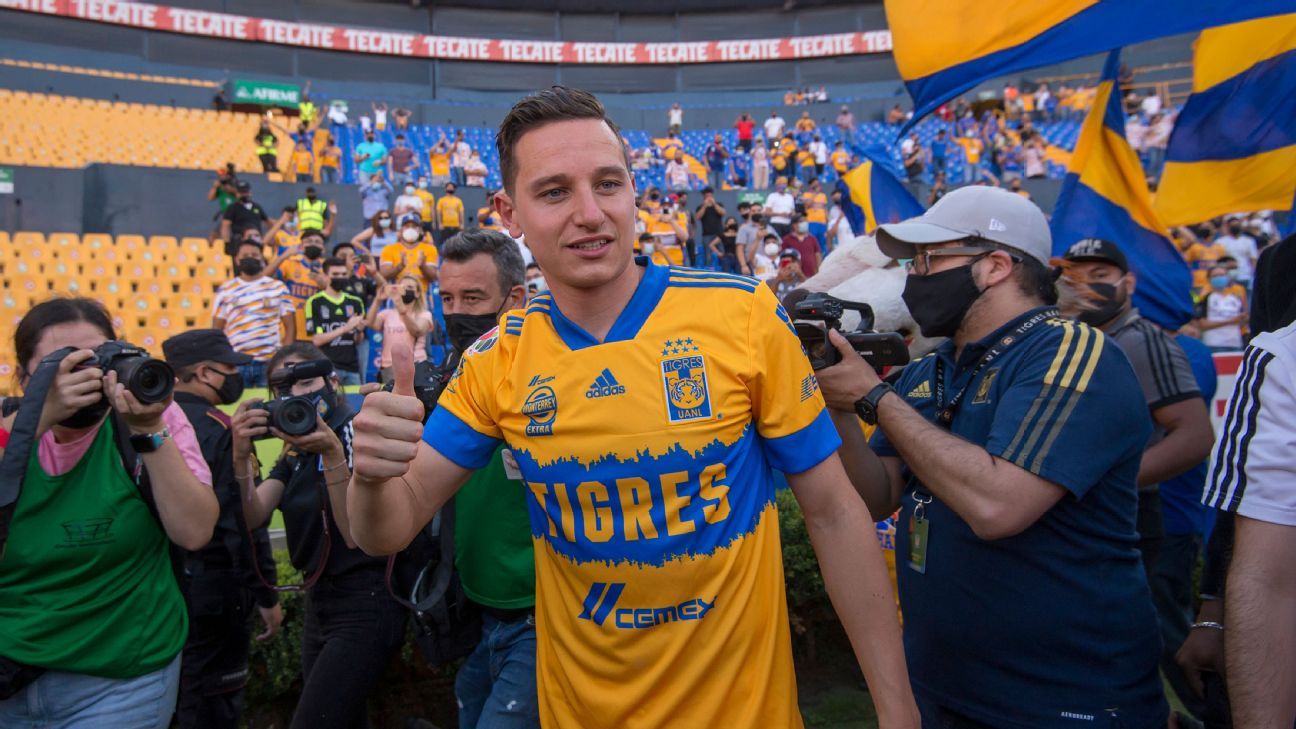 There are five versions of Florian Thauvin fluttering. All inaccurate, but none disposable or disposable. In the uncomfortable armchair of anxiety and uncertainty, Mexican soccer awaits with its flattering tongues and sharp claws as needed.

Florian Tristan Mariano Thauvin, crack or firecracker? The field of play, supreme judge, will be investing or undressing the stellar reinforcement of Miguel Herrera’s Tigres, facing this still beardless Apertura 2021.

But, what are those five universes of the French attacker, who has the endorsement of his countryman André-Pierre Gignac, who is willing to sponsor him at his baptism, confirmation, wedding and honeymoon, as a feline from Zuazua? Check them out.

1.- The Florian Thauvin of Marseille.

2.- The one about the Tokyo Olympics.

3.- The version that he himself propagates.

5.- And the one of the desperate chimeras of the Tigres fans for Florian Thauvin to be the godson, first, and then the heir of Gignac.

The Volcano yearns for its own insides to burst with the appearance of Florian. A devout hobby, frayed with nerves even after the exile of the one who seemed eternal, Ricardo Ferretti, and with some members of the same crowd, debating that of whether “it is better known bad, than good to know”, before the irruption of Miguel Herrera .

Will he make his debut against Santos this weekend? It seems unlikely. The Louse will know how to handle the times. Neither pamper him nor throw him to the stake. But, he understands that the feline congregation already wants to see Thauvin on the court.

Florian is obviously not afraid of the challenge. When his parents divorced, his childhood was left without roots. He assures that soccer was the raft that saved him from the family shipwreck. From his native Orleans he entered the Chateauroux Soccer Academy. “I only went home on weekends,” he said.

After going through Grenoble – until this club declared bankruptcy – and Bastia, their faculties seduced Olympique de Marseille. Nationally selected from the junior categories, at age 20 he aroused great expectations. They called it then ‘Rough Diamond’, a rough diamond. The problem is that today they continue to call him the same.

Newcastle United appeared, but it did not consolidate in the Premier League, and the end was to appear in a tuxedo to a preseason game, which caused severe criticism, in addition to its inconsistency on the court.

He returned to Marseille, introduced a mature, committed Thauvin, despite a back injury that he suffered from a young age, according to lifeblogger.com, and that sometimes preyed on him. According to Transfermarkt, his total numbers with Marseille are unappealable: 281 games, 86 goals and 61 assists.

France’s Olympic team had high expectations in attack. The Gignac-Thauvin equation made fans dream, especially after the violent jolt by the failure in the European Cup of Nations: France was eliminated by Switzerland in the Round of 16.

But, at Tokyo 2020, France experienced another failure. Gignac rescued his participation with a triplet against South Africa, but criticism hung on the ‘Diamond in the Rough’. The French media did not waste epithets against Thauvin, after the elimination against Japan, and after in the first game, they were thrashed by Mexico.

Media such as L’Equipe and Le Figaro blamed him for the poor performance of the selection. “(Thauvin) was one of the reinforcements of this young team from France. If Gignac took this status, Florian Thauvin did not assume this leadership role at all “, quoted one, and the other finished:” The former Marseille remained at the level of what he offered against Mexico and South Africa. It is a tournament to forget for the world champion. I was not up to the challenge. “

For his part, Florian Thauvin assures that before arriving at Tigres he had better offers in European football, and even with higher salaries than those that will be deposited promptly from the Zuazua offices.

“Since September (2020) I had talks with Milan, and in January (2021) I spoke with Paolo Maldini (AC Milan’s sports director),” he told the newspaper As.

According to Thauvin’s assertions, he could have remained in Europe, but the scenario that Tigres presented him and a radical change of life, seduced him.

“I had offers from France (Lyon and renewal with Marseille), from Spain (the champion Atlético de Madrid) and from Italy (AC Milan). The offer from Tigres arrived, and it changed everything, ”the French forward told the media.

“It is not a question of money. If money was important, I would have chosen to go to China or Saudi Arabia. In Marseille I was no longer comfortable, and now (choosing Tigres) means a great team, winning titles, a great fans, and enjoying the game more ”, declared Thauvin.

The French striker has numbers to back it up. From his performance in Marseille, to the strict parameters of the FIFA 21 video game.

With Olympique, Florian Thauvin was listed among the best in the goals and assists equation, according to the records of the French League since his final reinstatement in the 2016-2017 season.

Meanwhile, in the technical sheet of the video game, FIFA 21 exalts his virtues as a dribbler, with a price of 92, and within that category it assigns him a 95 in agility, 84 in ball control, 93 in suddenness and 92 in dodge.

The arrival of a current world champion undoubtedly impacts Mexican soccer. He was not a benchmark, but Florian Thauvin was part of the squad that was crowned against Croatia in the 2018 World Cup Russia.

The Tigres fans are excited about the possibility that he will shine with Gignac at his side, and for that reason, they waited to see that attack formula, “his” attack formula, at the Tokyo Olympics. It did not happen.

Beyond the talks with Gignac, Thauvin reveals that there were more players recommending the journey through Mexican soccer, like an Argentine who still remains in Marseille.

“Darío Benedetto told me that I come to a league where there are great teams, he played for America; He told me that it is a great championship and it is different from the French one. For the moment I need to see him to learn, ”he said in a statement to Liga Mx.

With that badge of world champion, the Tigres fans naturally expect better numbers than their fellow countrymen, such as Andy Delort and Thimothee Kolodziejczak, who passed through Zuazua with more pain than glory.

For now, while the so-called in France, ‘Diamond in the Rough’, takes physical form, rhythm of the game, and assimilates the claims of Miguel Herrera, those five versions of Florian Tristan Mariano Thauvin will continue on the Tigres’ clothesline. In the end, only he has the key to his own mysteries.