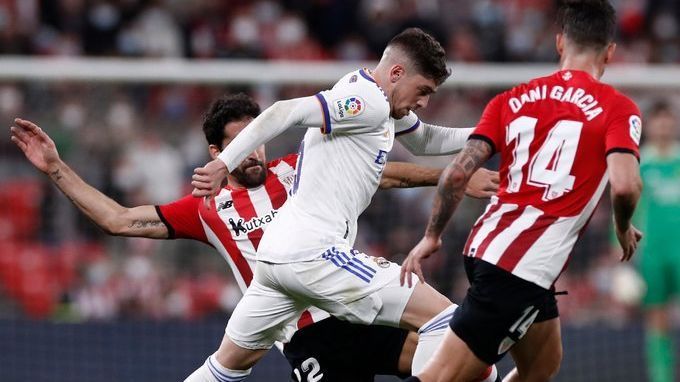 Real Madrid published Federico Valverde’s ‘Epic 5’ on their social networks, where he Uruguayan midfielder had to put together his ideal team with former historical players of the Spanish cast.

“The goalkeeper is Iker Casillas; he made his debut when he was just a few years old and managed to win many titles in the club of his dreams ”, the 23-year-old midfielder began by highlighting, an age that explains a large part of the chosen footballers.

Then he continued in assembling his team for a football five: “My second player is Roberto Carlos, a footballer who had a lot of arrival, scored many goals with the courage to hit the goal and had a lot of power in the shot, one of his great virtues ”, commented the Uruguayan.

After of the Brazilian left-back, the third selected footballer It was the Argentine Fernando Redondo; Valverde explained: “He is admired by the whole world and by many, many people. I have not had the opportunity to see it live, I have seen it a lot in videos. In addition, my family talks a lot about him because of how he played and for everything he showed on the field; he is one of my favorite players ”.

In attack, the midfielder trained in Peñarol He first chose Zinedine Zidane: “In addition to what he has shown as a footballer for both Real and the French National Team, he is a world star. He is loved by many people and I had the opportunity for him to address me, I only have words of gratitude to him because he has given me so much, ”said the Uruguayan in relation to the coach who worked with him for three seasons (2018-19, 2019- 20 and 2020-21).

And the last one chosen was the Spaniard Raúl, of whom Valverde affirmed: “He is a person who transmits a lot, he infected the team a lot.. I think he was a very brave player, who showed why he was the captain of the team, with a tremendous attitude and being one of the emblems of Real ”.

“He should have played without defenses,” Valverde sentenced ironically and laughing as he reviewed the result of his chosen team.