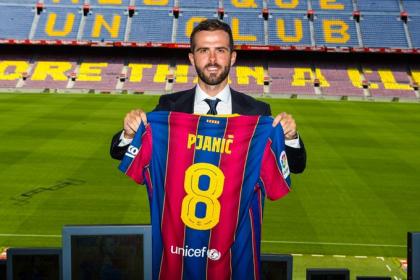 It was an ephemeral dream that of Miralem Pjanic at FC Barcelona. He barely met Messi, barely managed to appear in an official photo, just an illusion all.

Today the Bosnian has hanging around his neck the transferable sign put up by coach Ronald Koeman, who was never convinced that the player could accommodate his idea.

Now, like Antoine Griezmann, he is on the list of urgent departures to alleviate the salary mass, an essential requirement for the renewal of the Argentine captain.

But unlike the French, Pjanic has given all the facilities for his departure, including a salary cut, tired of not fitting in and of seeing pass, at 30, several offers that he received at the time.

Where would i go? Back to Juventus! The attacker would return to Turin under the figure of the transfer, which would be from one season with an option to another. “Juve has asked for time to release Aaron Ramsey and it seems that the negotiations to transfer him to Wolverhampton or Tottenham are already well advanced. The Welsh footballer would release salary mass and leave his place to a Pjanic, who is a signing directly endorsed by the new Juve coach, Massimiliano Allegri, “explained the Sport newspaper.

And what business did FC Barcelona do with that signing then? That is the real question. Although it was a trade for Arthur that, initially, it was said that it would leave 12 million euros of profit for the Catalans, in the long term the business would not be so good.

As reported by the newspaper a year ago, when the operation was made official, in the long term the business was ruinous: “Arthur would have received a maximum of 9 million net in the three years he had left at Barça (he had one of the most casualties), while Pjanic will go to 30 million in his Blaugrana stage (7.5 net per year). A difference of 21 million in salary, which will undoubtedly strain even more the battered Blaugrana treasury “, published the media.

It is true that since only one year has passed, that amount will no longer be reached. But it is true that they stopped paying Arthur 3 million for paying 7.5 to Pjanic. And neither of them made a difference on the court! Bartomeu’s transfer policy has not finished taking its toll on FC Barcelona.