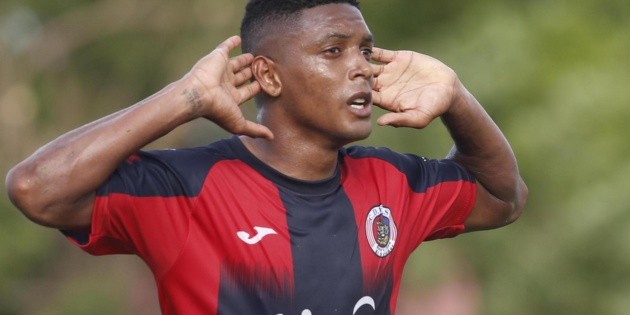 The national champion FAS He started on the right foot on his way to revalidate the title against a Santa Tecla who was outmatched for much of the game despite equalizing on the scoreboard in the first half.

Kevin Reyes, Guillermo Stradella and Luis Peralta ruled the tigrilla victory in an afternoon of good football by the leaders of ‘Zarco’ Rodríguez who had opportunities to beat the parakeet with a more bulky result.

The western team did not give the Da Silva team a chance and made its debut in a good way before a Quiteño stadium that had little influx of public due to the issue of the pandemic.

The match was attractive because it was the debut of the national champion FAS against his rival in the semifinals of the last contest as Santa Tecla.

The tiger box presented an initial eleven with the base of the previous tournament except for the incorporation of central defender Rudy Clavel.

On the other hand, the click box directed by Rubén Da Silva also showed a team similar to the last confrontation in Quiteño with the Fabricio Silva variant in the main scheme.

The match began with Santaneco dominance trying to string together goal plays through Wilma Torres who had the first opportunity at five minutes with a left-handed shot that went over the top of the Teclean goal. A minute later, right-back Ibsen Castro was encouraged to try from outside the area and the ball skimmed the crossbar.

Again in a wrong start by the Mexican goalkeeper, the national champion had his third chance through Stradella by winning the baseline and sending a shot that Dautt held well.

Santa Tecla’s response came until the quarter hour with a free kick from Irving Herrera that goalkeeper Kevin Carabantes deflected on the right.

After a few minutes of intermittent football in the midfield, FAS managed to open the scoring in minute 24. Kevin Reyes took advantage of a cross on the right by Sradella and beat Fabricio Silva in the air to host his shot on the right side of the goalkeeper Dautt who was left with no options to stop the ball.

From there, Santa Tecla was advancing lines to the point of equalizing the score through Marlon Cornejo. The left midfielder received a center from the right side of César Flores and with a great technical gesture, Tecla’s midfielder finished off Carabantes’ right angle that stretched as much as he could but the shot carried power and placement that even hit the crossbar .

SECOND TIME
Already in the complementary stage, the local team returned to take the lead of the match and in minute 55, Luis Peralta had a clear opportunity to receive a pass inside the area but did not give him the right direction before the desperate departure of goalkeeper Dautt.

Two minutes later, Stradella had an arrival on the right after a filtered pass from Wila Torres but could not beat goalkeeper Dautt who sent the ball to the corner.

TIGRILLO SIEGE
The third was the charm for Stradella, since in minute 62 he put the FAS ahead with a play similar to that of previous minutes but this time it was Kevin Reyes who assisted the Argentine-Salvadoran so that he shot Dautt who could not do a lot before the powerful shot of the tiger player.

The ‘moth’ team did not have time to react and when the changes were ready, again FAS did damage with the same play by the right sector, only this time Stradella decided to look for the pass so that Peralta could define the empty goal.

Already in the last minutes, it was a walk through the FAS field that showed his best version creating plays through the newcomer Dustin Corea who tried to find his goal.

Thus culminated the actions in the Quiteño stadium that will see action again this next Wednesday when FAS faces Jocoso advancing date number 3 for the Concacaf League.