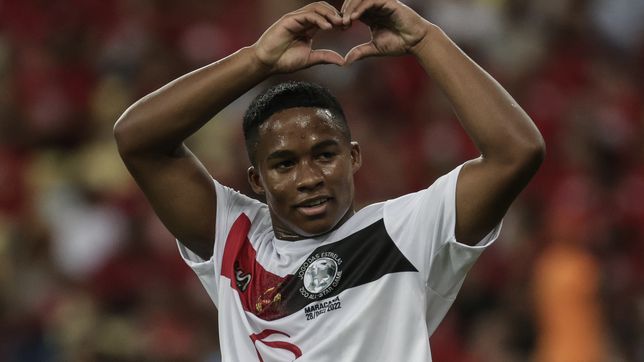 Real Madrid will not enjoy Endrick until the summer of 2024. However, he can breathe easy; the one in Brasilia is in good hands. Jewels must be treated with care and Palmeiras is clear about that. Hence, as AS has learned, they are measuring the steps of the very young striker with great care. With its explosion in the 2022 Copinha, the ‘Endrick phenomenon’ was unleashed. The big clubs narrowed their eyes and the fans longed for its debut among professionals. He was only 15 years old. The 16 that allowed him to do so was fulfilled on July 21, but it was not until October 7 that he made his debut with the first team. Abel Ferreira and his coaching staff put the matter on hold. They were looking for a premiere in a favorable context, at the right time. Control the times, without external pressure accelerating, or accelerating, events.

One year after that vaunted irruption, has started 2023 as a starter with Verdão. For something his club asked the CBF to withdraw him from the call for the South American U-20. A draw (0-0) against São Bento and victory against Botafogo. 170 minutes in the first two days of the paulistao. He has not managed to score, although he has given away some play for the gallery and was one of the most outstanding footballers on the green especially in the premiere (MVP of the bet). Despite his 16 years, after the game he took the floor to slip ambitious words, but destined for collective success: “I have to do more, I was not well… I have to work, work and work to play more and help my teammates”. A mature discourse that reveals this behind-the-scenes effort. In training, on a day-to-day basis, a bubble has been created for the left-handed player to dribble past the rush and control the intensity of the spotlights. Avoid that the expectation can blind the future striker of Madrid.

In Palmeiras they are molding Endrick to the millimeter. In the twilight of last year, he scored 3 goals in just 306 minutes, spread over seven games, but the first goal did not come immediately (he did it in his fourth game, against Athletico Paranaense, and twice). For a footballer used to taking center stage, it increased the pressure Endrick himself places on his shoulders. There they played a fundamental role subsequent conversations with the coaching staff, who insisted that the important thing was to help the team. A call for calm. The talks, in this process of coupling with the elderly, have been a constant, trying to prevent the media noise from making him raise his feet off the ground.

Also publicly. “If the club thinks about buying a ticket to Disneyland for him and his family… That’s what he needs. He is 15 years old, he is still a child. I like to give time to time to these players ”, joked the coach when speculation about the presence of his pupil in the last Club World Cup (in February 2022) grew. Piano, piano. Endrick, anecdote aside (he visited Paris and the Disney park with his family at a time when he also attended Madrid and Barça matches as a fan), has never wanted to rush and has followed the coach’s teachings to the letter. of the: “I am going to believe in Abel, in everything he tells me. He wants the best for me, I will continue training and dedicating myself hard to win his heartthat of the teammates, that of the fans and that of the entire squad.”

An equal in training

Thus it is explained that Endrick, despite his enormous competitive gene, has known how to occupy his space, fitting in with the veterans naturally, accepting their teachings. You play as you train. Premise that the young striker applies and that Abel Ferreira has strengthened. Aware that Endrick is a footballer with well-defined goals, he has always been treated as an equal in training. Same intensity, same demand. In Palmeiras practices there is no condescension with Endrick. The date of birth does not matter. The impetus to mate quickly made him start with natural errors of age, some loss of more for example. It didn’t take long for his teammates to catch their attention, with a single objective, to direct him in the right direction. This has encouraged him to improve on a day-to-day basis and to adapt perfectly to the loads in practice.

An ace in front of the door

As a plus, he is physically a privileged footballer, a fact that has allowed him to get on first-name football terms with his teammates from minute one. Although, as he has been able to know this newspaper, His skills in finishing and shooting on goal have been the ones that have shone the most and they have helped speed up that fit in a team like Palmeiras, which must not be forgotten is the current champion of Brazil. An ecosystem where Endrick’s personality fits like a glove.

The ram is the only footballer who has managed to win titles in all categories with Palmeiras, from Under-11 to professionalism. That hunger is explained by an anecdote that impressed the coaching staff. When he was already part of the Under-20 team, wanted to go down to Sub-17 to help them win the Cup. One step back, to take two forward. Or three. Now, as a starter, he has the challenge of maintaining his status and continuing to score goals on his personal account. In the early hours of Thursday to Friday, against Botafogo (1:30 Spanish time), he will have a new opportunity to continue growing, scoring goals and forcing Madrid to rub their hands even more.

Endrick, molded to the millimeter