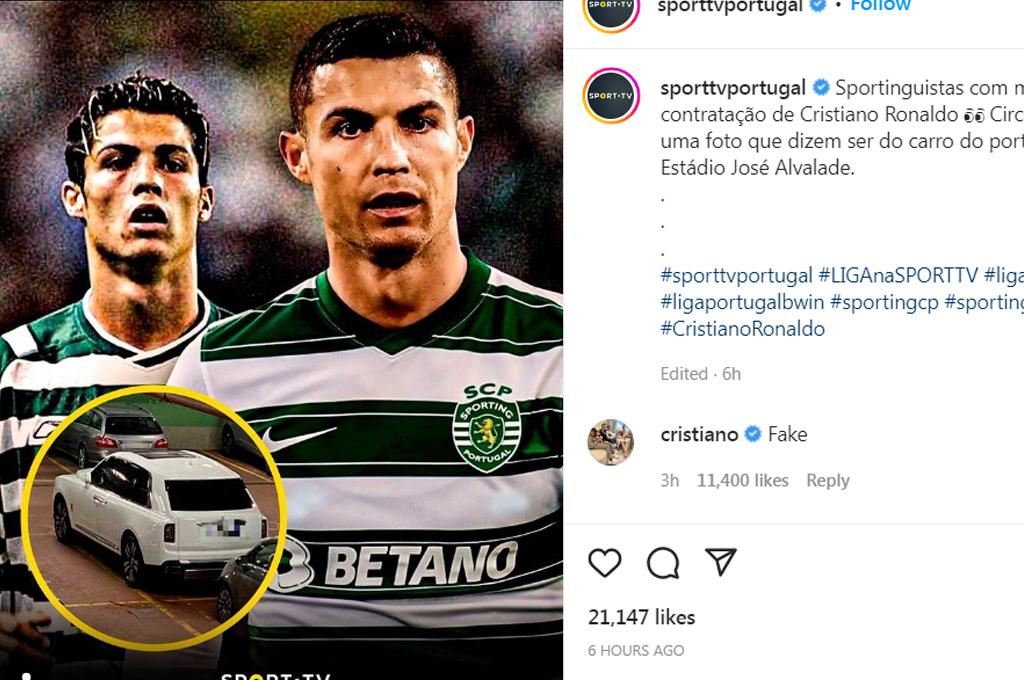 Cristiano Ronaldo he will not return to his first home. Just when this Sunday the version of a possible return to Sporting de Portugal was gaining strength, the player himself denied that he is negotiating his return with the club where he started his professional career.

Russian team mocks CR7 after being rejected by several clubs

At 37 years of age and with the intention of continuing to fight in the absolute elite, Christian a return to the place where he began to write his story is not considered. And she made it very clear in a post by Sports TV.

The aforementioned medium posted an edited image of the Portuguese with the shirt of the Sporting and added that a photo was circulating on social networks that would be the soccer player’s truck outside the Estádio José Alvalade.

”Sportinguistas with more hopes of signing Cristiano Ronaldo. A photo is circulating on social networks that they say is the Portuguese’s car in the garage of the José Alvalade Stadium”, published Sport TV.

Faced with this situation, the top scorer in soccer history responded with a resounding “False” through Instagram.

Ronaldo took the time to deny that information and for fans of the Sporting do not get excited about its arrival.

Subsequently, Roman Fabriziothe most reliable source on issues related to the market, echoed “Bicho’s” response and assured that the striker is not considering a new stage with the institution in which he was trained.

“I think that at this time it is not possible,” he said a few days ago Hugo Vianasports director of Sporting on Sky Sports, about the possible return of CR7.

”Cristiano is free to decide where he wants to play and in the future anything is possible. He has one more year on his contract and we will see what he decides. You never know”, added the manager of the ‘Lions’.

Cristiano Ronaldo denies returning to this club after rumors linking him out of Manchester United: ”False”