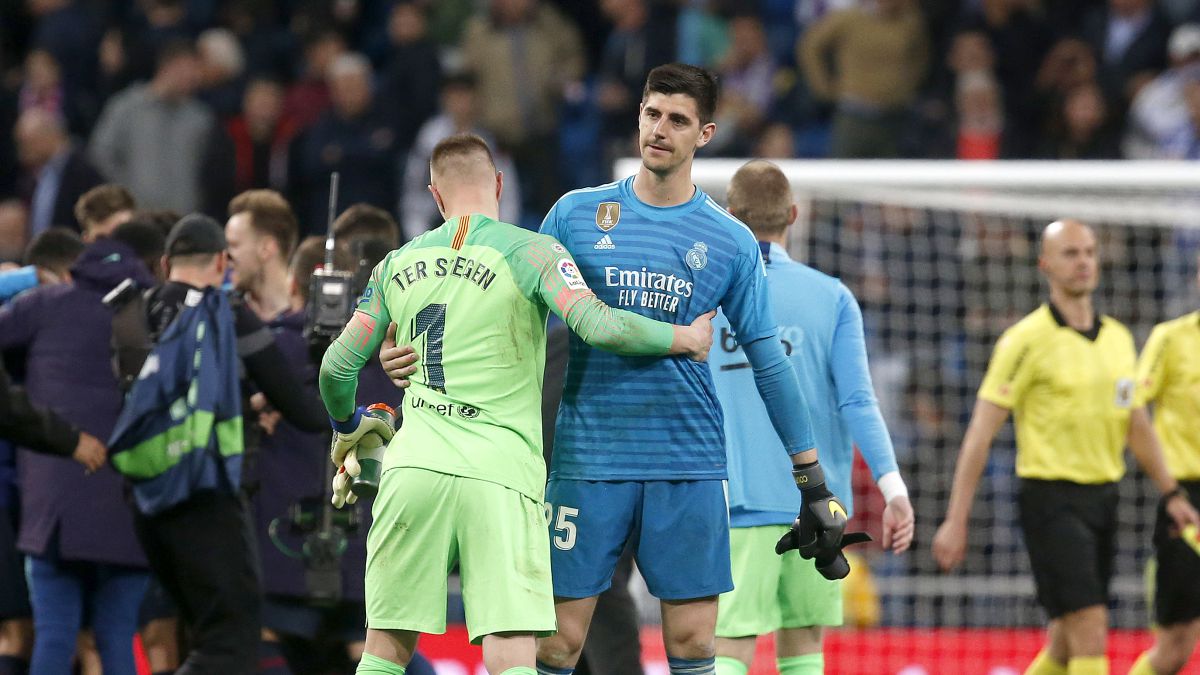 If soccer are dynamic, this is the best example. The one with the goalsthe walls that this Sunday will try to become giants in the Classic of the Bernabéu (9:00 p.m., Movistar LaLiga). to one side will be Courtois, a goalkeeper with a positive trend, very firm, solid, transmitting security and clinging to the data to convince that, today, he is the best goalkeeper in the world. Or at least the one that is in the best moment. And on the other, Ter Stegenwho a few years ago was one of the pillars of Barça and today, more than ever, prostrates himself in the eye of the debate. His numbers this season are the worst since he landed in Barcelona. And the ‘indisputable’ label begins to peel off.

The Belgian is the current Zamora First, with a coefficient of 0.75 goals per game (We remind you that in order to qualify for the trophy you must have played at least 60 full minutes in 28 days). The Belgian has recently reached that figure, 28 games, with only 21 claws conceded. The least of the entire category along with Rulli, but who has played three fewer games. Thibaut’s statistics came to the fore with the recent controversy of FourFourTwowhich did not include him in the Top-10 goalkeepers in the world. “If you say that, you have to break the journalist’s card”said Ancelotti at a press conference. Cutting.

And the numbers back him up. As AS demonstrated in a report a few days ago, the 78.7% stops that Courtois averages in all competitions is only surpassed by the 80.8% of Sá, the Wolves goalkeeper. With 44is the one that stops the most shots from outside the box has completed, ahead of De Gea’s 42nd and Ramsdale’s 33rd. If we take into account the shots inside the boxis the third, with 63 (Sa, 79; De Gea, 72). On total stops it also comes out reinforced: it has done 110only behind De Gea, with 123.

It is currently the 13th in the race for Zamorawith a coefficient of 1.08 goals per game (26 conceded in 24 games). “I’m happy with my performance, there are many things I’m doing well. But in recent weeks there are people who have written things to add fuel to the fire. You are like that and I understand it,” he said the day before playing in Naples. A few years ago he was an undisputed pillar and now he is up for debate. Laporta, in fact, has already slipped that Barça will sign a second goalkeeper to squeeze him.

For Courtois It will be another day in the office in which to keep the level up to date. That outstanding that has him on the edge of his fourth Zamora trophy (He won two with Atlético, in 2012-13 and 2013-14; and one with Madrid, in 2019-20). For Ter Stegen, however, it is an ideal situation to hit the table and vindicate himself. Say ‘here I am’ based on stops. The Classic of LaLiga, this Sunday, will also be the goalkeeper.