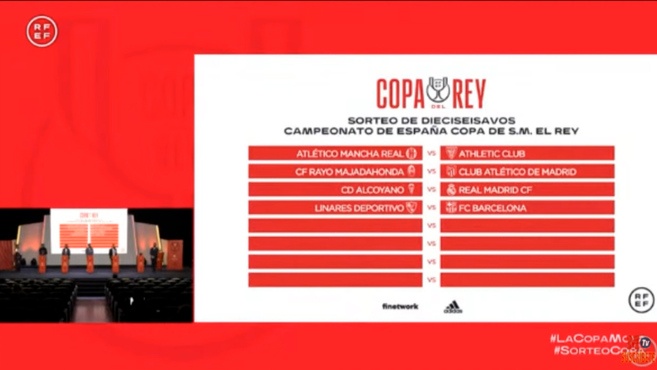 Lto Copa del Rey enters a new round, that of round of 32, which includes the four clubs that were until now exempt for participating in the Spanish Super Cup: Real Madrid, Atltico de Madrid, Barcelona and Athletic. And among all the pairings Alcoyano-Real Madrid stands out, since it will be a reissue of last season’s duel where the First RFEF team eliminated the whites. So there will be a rematch.

Summary of the Copa del Rey Draw: all crosses

Review of the triumph of Rayo Majadahonda

scar Carazo, Sports Director of the Rayo Majadahonda be another of the innocent hands. His team eliminated Malaga and will have as a prize a First who could be one of the four of the Super Cup or another.

It remained to speak of another of the teams that eliminated a First, Alcoyano, who was ‘loaded’ in the penalty shootout against Levante.

Review of the triumph of Linares Deportivo

Miguel Linares placeholder image, Sports Director of the Linares Deportivo He is the next to take the stand and, therefore, also be an innocent hand: “We have been several seasons that the fans and the club are very united and very happy to give them these joys.” Linares Deportivo eliminated Alavs

Review of the triumph of Atltico Baleares

Take the stand now Jordi Roger, Technical Secretary the Balearic Islands, a team that won by thrashing Getafe. l be another one of the innocent hands. “I’ve seen it several times already. We played a great game,” he sums up.

Review of the triumph of Mancha Real

Fernando Lopez, Mancha Real player, jumps on stage. l be one of the innocent hands of the draw. “Thanks to this format we have been able to enjoy a magical night,” he says.

The act of the draw begins

Everything ready from Las Rozas. Sal Ramos, presenter and member of the RFEF, gives way to a brief introductory speech. In short, the balls.

Will there be a rematch?

One of the pairings that could be given is an Alcoyano-Real Madrid. Last season they already saw each other in this same round and the set of the First RFEF was ‘charged’ to the whites tracing them after an extension included. There could be a rematch.

There is no VAR

In this round of round of 32, as in the previous ones, there will be no VAR technology. Be the last round in which there is no VAR. From the round of 16 they join.

Rest of the conditions of the draw

The three remaining teams from the Super Cup will face three teams from the First RFEF (Alcoyano, Balearic Islands, Linares, Majadahonda). One of them will ‘fall’ from these options and will have as a rival another First team other than those of the Super Cup. Finally, eleven clashes between teams from LaLiga Smartbank and LaLiga Santander.

El Mancha Real, the most modest team in the draw

In this round the most modest team is the Royal Stain and, therefore, according to the rules of the draw, your rival will be one of the four teams that enter this round and that will play the Spanish Super Cup (Athletic Club, Atltico de Madrid, FC Barcelona and Real Madrid). What rival do you want him?

We remember that this round is still the only match in the field of the rival of lesser category, so the surprise factor is still very present. Let’s remember that four Firsts have already fallen: Alavs, Granada, Getafe and Levante. Especially painful was the elimination of Getafe, which received a ‘little hand’ from Atltico Baleares.

Dates of the round of 32

This new round of the Copa del Rey, the third, will be played in the new year. Specifically in the final dates of Christmas. The matches will take place between the days January 4, 5 and 6. So we will have football in full Parades and on the Day of Kings itself.

Good morning and welcome to the live of this draw for the round of 32 of the Copa del Rey, to start at 12.30 pm in La Ciudad del Ftbol de Las Rozas, in Madrid.

Copa del Rey draw live: crosses and pairings of the round of 32