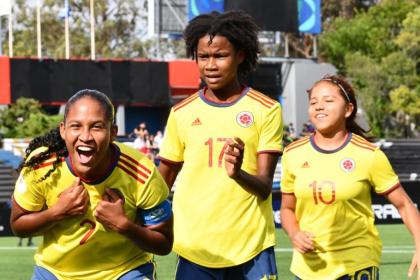 The chest is filled with pride thanks to the great performance of the Colombia Women’s U-17 National Teamwho this Wednesday got his sixth win in the South American Championship which is fulfilled in Uruguay. Those led by Carlos Paniagua they eliminated Chile on the second day of the Quadrangular Final and managed to qualify early for the U-17 World Cup that will be in India in October.

The tricolor played an impeccable match against the red team, which they had already beaten in the first phase. This time he fairly prevailed 3-0, with scores from Karla Torres, Linda Caicedo and Sintia Cabezas. Linda, with all her waste of talent, was the great figure of the match at the Charrúa stadium. One goal and double assist.

The first goal came 9 minutes into the first half, after a great individual action by Linda Caicedo who got rid of several rivals and put in an impeccable center for Karla Torres who pushed her to the bottom. Colombia uncovered Chile’s defensive errors and forgave a couple of actions in the first 45 minutes.

In the complement, the two others arrived. Sintia Cabezas, Karla Torres and Linda Caicedo threw a party in the Chile area at 75′. In the end it was the outstanding Deportivo Cali player who pushed the ball to the bottom with a forehand. Barely five minutes passed when Sintia put the third, after a spectacular pass from Linda. She received on the edge of the area and connected with a left leg.

With this result, Colombia reached 6 points in the Final Quadrangular and even without playing the last date, which will be on Saturday against Brazil, it has already secured its presence in the World Cup in India.

Relive the goals of the Colombian National Team against Chile:

Colombia scored and qualified for the U17 Women’s World Cup: Huge!