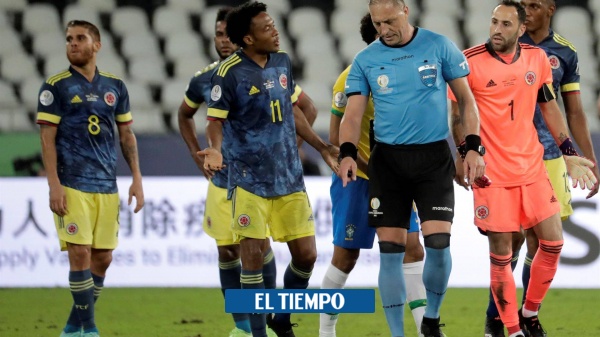 Nestor Pitana, referee questioned for decision in the game.

The federation sent a letter of protest to Conmebol.

After the controversial move that generated the partial draw, 1-1, with Brazil in the group B match of the Copa América, the Colombian Football Federation sent a formal protest to the Conmebol.

“The Colombian Football Federation is allowed to inform that it proceeded to file before the highest body of South American football a note of protest for the arbitration during the June 23 match of the Conmebol Copa América 2021”, says the communication.

You may be interested in: (Listen to the VAR audios about Brazil’s controversial goal play)

And he adds: “In that meeting, at minute 77 of the game there was a play where the ball bounces off the central referee, Nestor Pitana, and it results in a promising attack for the Brazilian team that ends in a goal ”.

In the protest, Colombia gives its interpretation of what happened in the controversial play.

“From the VAR They even told the referee that the pass from the Brazilian player that bounced off the referee was going to be received by a Colombian. However, the central judge and the VAR referees decided to omit the application of Rule 9 of the game rules, directly affecting the result of the match ”, it is noted.

“The FCF asked Conmebol for the immediate suspension of the match referees, as well as recently the Referees Commission suspended two Colombian referees for the serious and manifest error consisting in the annulment of a goal during the Qualifiers match to the Fifa world cup Tastingr 2022 between Uruguay Y Paraguay June 3 ”, he concludes.

You may be interested in: (This is the rule by which Brazil’s controversial goal was validated)