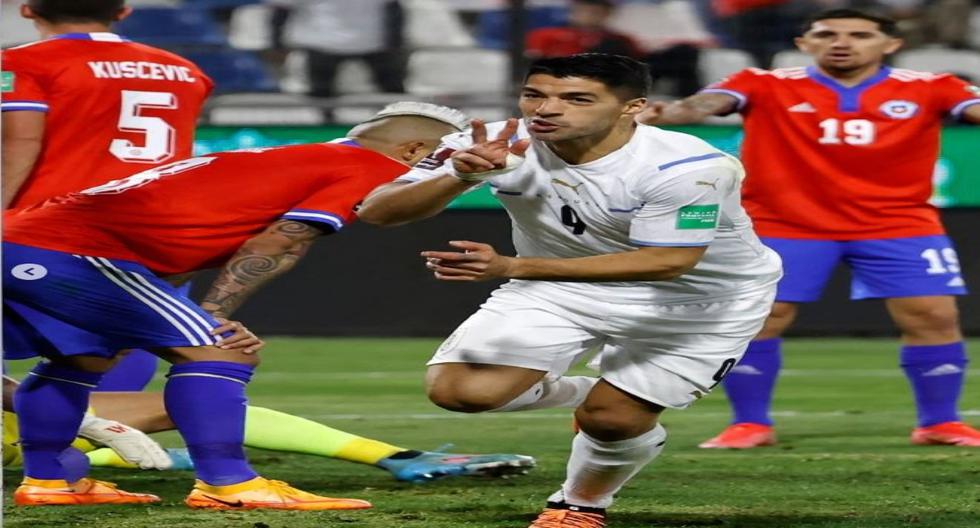 Goal for Uruguay! Federico Valverde, the Real Madrid player puts the second. He sentenced the game with a strong shot from the crescent of the Chilean area.

Missed shot by Ronnie Fernández, with the left from the center of the area that goes too high. Assisted by Alexis Sanchez.

Missed shot by Joaquín Montecinos, from outside the area that was lost to the left. Assisted by Benjamin Kuscevic

Goooooal for Uruguay! Luis Suárez, from ‘Chilean’, after a corner, puts the ‘light blue’ in advantage.

Benjamín Kuscevic’s shot rejected, with the right from outside the area. Assisted by Diego Valdes with a headed pass.

Lucas Torreira’s shot rejected, with the right from the center of the area.

Missed shot by Joaquín Montecinos, from outside the area very close to the left post but it went slightly wide. Assisted by Charles Aranguiz

MIN 65 | Rodrigo Bentancur (Uruguay) has been shown a yellow card for dangerous play.

MIN 62 | Gary Medel (Chile) has been shown a yellow card for dangerous play.

Ben Brereton Díaz finishes off with his right foot from the center of the area that goes high and wide to the right.

Shot stopped next to the right side of the goal by Alexis Sánchez. Assisted by Arturo Vidal.

min 25 | Uruguay attack
Header missed by Edinson Cavani, from the center of the area that misses to the left. Assisted by Federico Valverde with a cross into the area after a corner kick.

Shot standing under sticks at ground level. Arturo Vidal, from outside the area. Assisted by Gabriel Suazo with a headed pass.

Rodrigo Bentancur, header from the center of the area. Assisted by Federico Valverde with a cross into the box.

WILL BEN BRERETON ARRIVE AGAINST URUGUAY?

The Chilean coach spoke about the present of Ben Brerettonwho is still in doubt for this match. “His evolution has been good, it was very premature for him to play with Brazil. The hours are going in his favor, we are going to wait until the last minute, to see how he reacts today in training. It is clear that the effort he is making. When the issue is a health issue, there may be a limitation. He has done everything possible, trained earlier than his teammates”Lasarte said.

LIKE THIS GOES THE TABLE OF POSITIONS OF THE ELIMINATORS

WHAT DOES CHILE NEED TO GO TO THE WORLD CUP?

If the Chilean team beats Uruguay in San Carlos de Apoquindo it does not depend on itself to obtain a place in the playoffs. Those of Martín Lasarte will have to wait for Peru loses at home to Paraguay (which comes from winning 3-1 against Ecuador) and that Colombia draw or lose against Venezuelawhich is the last in the table of these Qatar 2022 Qualifiers.

WHAT HAPPENS IF CHILE DRAWS AGAINST URUGUAY?

If the Chilean team draws against ‘Celeste’, they will have no chance of qualifying for Qatar 2022. How would ‘La Roja’ fare in the table? Martín Lasarte’s team with any draw would end up with 20 points in the Qualifiers table and by goal difference would only remain in seventh place in the standings.

WHAT HAPPENS IF CHILE LOSES TO URUGUAY?

If the Chilean team lost to Uruguay, it would be out of the Qatar 2022 World Cup and would remain in seventh place in the Qualifiers by goal difference, since it surpasses Paraguay in that sense, which could reach it in points if it beats Peru in Lima.

WHAT SELECTIONS ARE PLAYED IN THE LAST DATE?

Peru, Colombia and Chile They are the three teams that have the direct fight for the playoff ticket. The winner of the play-off slot will face the team that finishes fifth in the Asian qualifier.

Matchday 18 of the South American Qualifiers will be played this Tuesday, March 29, and will be played simultaneously. Check here the calendar and schedule of the matches.

They propose a “Pact of Santiago” to Uruguay

According to the Chilean portal ‘Redgol’, something positive that the team of Arturo Vidal and company has is that they will face some charrúas already qualified for the World Cup, without any need to add. “If the Lima Pact ever existed, between Peruvians and Colombians, why can’t the Santiago Pact be born now? There are some reasons to ‘get excited’ about that”they indicate.

DATA OF THE CHILE SELECTION

• Chile did not lose in the last four home games against Uruguay in the Qualifiers (W2 D2). It is their longest unbeaten streak playing at home against the Uruguayans in the tournament.

• Chile have won four of their last seven Qualifying matches (W4 D3), having won just one of their first 10 in the tournament (W1 D4 D5).

• Chile is the team that committed the most penalties and conceded the most goals in this way in the South American Qualifiers for the 2022 World Cup. There were six penalties against the Chileans, all converted.

DATA OF THE URUGUAY SELECTION

• Uruguay won their last three matches in South American Qualifying. The only time that La Celeste had more consecutive victories in the tournament was between 1961 and 1969 (6W).