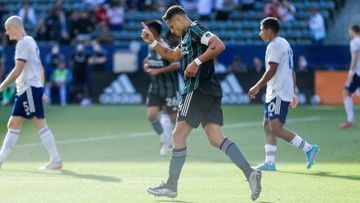 the mexican striker Javier ‘Chicharito’ Hernandez scored a brace to close the preseason with LA Galaxy. One week before the start of the 2022 Major League Soccer season, the Los Angeles team finished their preparation with a friendly match against D.C. Unitedwhich ended in a 2-2 draw, this Saturday at Dignity Health Sports Park.

On two occasions, LA Galaxy was down on the scoreboard and it was Chicharito who found the equalizing goals, first at minute 26′ and the second at 74′. The previous season, the Mexican striker was the team’s top scorer with 17 points, however the team was left out of the postseason. This campaign, Chicha wants to contribute in every possible way that allows them to be in the playoffs.

“In this life you cannot ask for something that you are not giving. If I want my teammates to be at a very high level, I have to be at the same level. We are all leaders in some way. There is something very important in this institution, which is that we all want to give our best in order to be champions,” said Chicharito before the match.

Regarding the activity of the Mexican players, Julián Araujo played the second 45 minutes of the match, while Efraín Álvarez and Chicharito were on the field for 78 minutes.

The new Designated Player reinforcement of the Angelenos, Douglas Costa, has not yet been able to participate because they are waiting for their visa.

“Qualify for the playoffs and win the Cup, that’s what’s on my mind and everyone’s mind, the sixth star for this institution,” Hernández concluded.