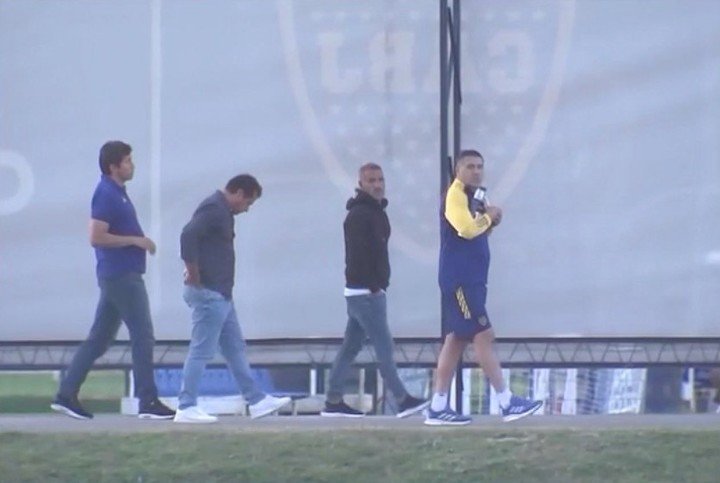 “I am enjoying the moment that I am living in Boca. Thank God I am where I always wanted to be.”

The micro-gate: “For us, it was not a mistake to lower the players from the micro, Román wanted to talk to them and encourage them and that was done. If the players had not wanted, they would have talked. Later the situation with Sebastián was clarified Everything was normal. The players agreed to talk and everything is fine. For me it’s not bad and it was discussed. Things were discussed in the locker room, and they left very satisfied with what Román transmitted to them. He is the vice president of the club. everyone accepted that and so it was.

“I think that in the last two games, when Sebastián was able to put together something with more of the players he wanted to have available, something else was seen. You have players and a very good squad. In these last two dates, Boca played better.”

“I feel sorry for what happened with Mineiro. Decisions were made later. I’m not going to justify anything. Moments have to be lived. I’m suspended for two years without being able to enter Conmebol matches, that hurts me.”

“Football works on the property. The Boca World exists and it’s very big. It’s the biggest thing there is.”

“We want Battaglia for a while, of course. We are very satisfied with him. We know we have to improve but we chose to do it with him, with this project. We are never going to talk to another coach when one is at the club. Battaglia not for now is in doubt.”

“We don’t think of the worst, we think of the best. The talks are very fluid. What is experienced in the club is very nice. There is a boss who is Roman who is totally crazy and drives us all crazy all day. very demanding. He is there all day, he stays on the property until 3 or 4 in the morning… He sleeps very little, but it is what we like and we do it with great care”.

“The one who makes the decision is the coach. We didn’t say anything to Battaglia about who has to play. We did talk about football and a lot.”

Riquelme, Cascini, Delgado and Bermúdez were at the summit with Battaglia.

On Tevez: “Since he left, I never spoke with him. We were very friends before, perhaps the relationship is damaged with the change of functions. We had a friendly relationship. I have no problem going to have a coffee with him. Neither We didn’t even fight when he was at the club. Friend as I am with the cello, no, but we did have friendship. We always treated him wonderfully when he was at the club. He had a contract and left six months before”.

“We all talk to Battaglia, always. We live together in there.”

“We were not expecting anything from Sebastian, no gesture. It is up to him to say that he was strong enough to continue. We never send anyone to say anything. He talks with us all day. He answers what he wants to answer. We attach too much importance.”

“Roman has spoken with Sebastián several times. He is not just another vice president and we do not ignore him.”

“We don’t feel that to win the next election we must win the Libertadores. If we want to win it and that is what is transmitted in the club. It is a goal that we have and the most beautiful of all. But to win the Copa Libertadores to win the elections, No. We don’t think about that and we don’t consider that. They play it a lot: you can win, you can lose. It’s difficult. It’s not easy to win it. There’s no doubt that we’re going to compete and we’re on our way. I think we have done very well to participate. We have beaten the cuckoo twice and unfortunately they eliminated us. Perhaps we were the ones who played the best against Mineiro. Today we are participating in another one and it is clear that we have to improve”.

Marcos Rojo’s dive with friends: “Many things are talked about on a player’s day-to-day basis when the contract is signed and some are written. We talked to Marcos Rojo about the crash and he apologized accordingly. We can’t be on top of what happens to a player 24 hours”.

About Almond: “When we arrived at the club, Agustín Almendra spent four months without coming. We spent a lot of time with him treating him with professionals. After many talks he understood that he had a little daughter and the things he had to do. He was a figure and then he made a mistake and went down to Reserve. The boy apologized and we are waiting for what is going to happen. He plays very well. We love him very much and today he is training with Ibarra and Chicho Serna and he is very well. But we respect Battaglia’s decision, we cannot go over him. Between Benedetto and Almendra they already talked about it, they are things that should not happen, they are impulses. They get along well, they cross paths every day”.

About Pavon: “He is training very well. The club is giving him everything as it should and waiting for what happens in June with him. At the time there were offers but they were not closed. If Pavón is released in June, something must also be arranged with Talleres. given a percentage of a future sale that they must pay back.

Cavani: “We are not negotiating with Cavani, but we are interested. Who isn’t? We thought that in the previous transfer book it could be given. It is very difficult to compete today because of how the country is doing with Manchester United.”

Cascini talked about everything: ‘Battaglia for a while’, the micro-gate and more