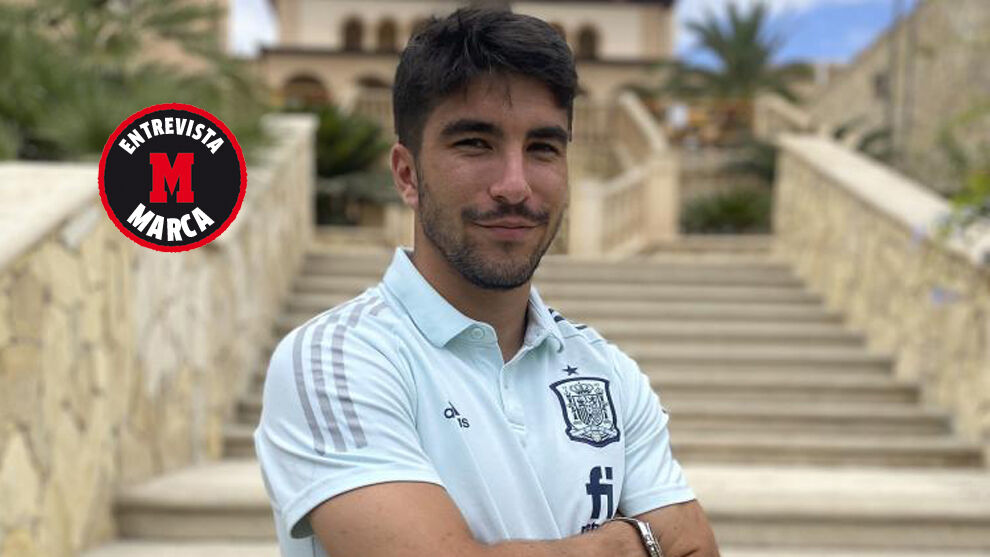 Por two days does not occupy Carlos Soler(1997, Valencia) one of the under-23 seniors in the Olympic games. Even so, the Valencian midfielder is one of the veterans of the team that has made Luis de la Fuente to win the gold medal. The captain of the Valencia shortened his vacation to be at the command of Luis Enrique first and in Japan later, where he hopes to be at the top of the podium. The experience deserves it.

Returning to this team has been like seeing school friends again
We are really looking forward to it, it was a couple of years since the U21 teammates got together, where we made such a good group and we won the European Championship. Even two years before we were runners-up. I am very happy, we have to be in a bubble, we cannot get together with anyone and we have trained as if it were a small preseason.
You have had to cut your vacation twice.
I had to stop my vacation to enter the parallel bubble of the absolute and then I had 15 days of vacation. When I saw the list, the next day we had to be focused. It is our job and what we have to do. I am very happy to be with this great team.
The Olympics were one of his big goals of the season.
Yes, in the end it is once in a lifetime and for two days I am so lucky to be able to be. When we got the European Championship we thought it would be last year and when it was postponed, we didn’t know if they were going to be suspended or not. We thought that now that it was our turn, they could suspend them. Hopefully everything returns to normal soon. Being here was one of my goals and I am very happy to have achieved it. It is very important and seeing the level of this list it is not easy to enter.

How was the bubble that lived with the absolute under the command of Luis Enrique?
It was curious because Luis Enrique called me one morning and at night he had to be in Madrid due to everything that had happened with Busquets. Later, Llorente’s false positive also happened. He told us that we had to join a parallel bubble. They were beautiful days even though we knew it was very difficult to be on the final list. Players had to fall due to covid, which nobody wanted to happen. They were Albiol or Rodrigo, who I get along very well with him, high-level players and we got together for a few days to help where we can and be available if we had to.
Where did you get him?
I was in Ibiza. I was close. Some were further away. Even if it had been far, it would have come anyway
Looking at the social networks of several footballers, they could have organized the group trip from Ibiza.
Well, two days after they called me I was going to Mexico. But if they had called me while I was there, I would have come without a problem.
Being in that bubble means being close to the absolute selection.
Having these opportunities to get closer to the absolute is something that happened to me before the 2018 World Cup, when I helped my teammates the week before. This time I was in this bubble. It means that I am doing things well and I am among those who can be chosen for the next lists and hopefully, it will be very nice for me, to fulfill the dream of debuting.
The season has been difficult on a collective level but positive on a personal level.
Yes, from the beginning we knew that the season was not going to be easy due to the changes in the club. Being one of the team captains, I know that every year you have to raise the level and take responsibility. Despite being 24 years old, I am one of the oldest in my club in terms of matches and I am very happy about it. Hopefully the next campaign will be better individually and collectively.
How has your transformation been to improve your number of goals?
In the end I have taken responsibility for the penalties, something that although it may seem easy, it is not easy and I work every day after training. In addition, at the end of the season I played a little more forward, in the double pivot but with more freedom, being able to reach the area more. I’ve had more chances to score. Every year I try to improve in numbers and feelings.
Talk about penalties. I got three to Madrid.
He had never shot three, not two in a game. It is an anecdote that remains there. I keep the ball at home, which I have signed by all my teammates and kept at home. It was a very special day, full of emotions. It does not happen many times to have three penalties in a game and score them. I am happy for them.
Did you doubt at some point?
Nerd. As the penalties passed the safer he was. The first was sent to repeat after having failed and had more doubts with Courtois in front, but after scoring it, in the second and in the third he was very confident. Some colleague asked me to throw it away and I said no. In fact, then I met them.
They miss the preseason for the Games.
It is that they are once in the life of a footballer. Athletes who gather there have a chance to go on more occasions. Nadal has gone many times, for example. It is very exciting to play such a beautiful tournament. It is a decision that each player makes in his club.
It will be nice to go back to Valencia with the gold.
Achieving something with your selection is important for yourself and for the country. It would be nice to get the gold. The master told us that it had been a very difficult list because there were great footballers out there who could be here. Players who won in Italy with us and were at a great level. Being here is a privilege and we are going to take advantage of it.