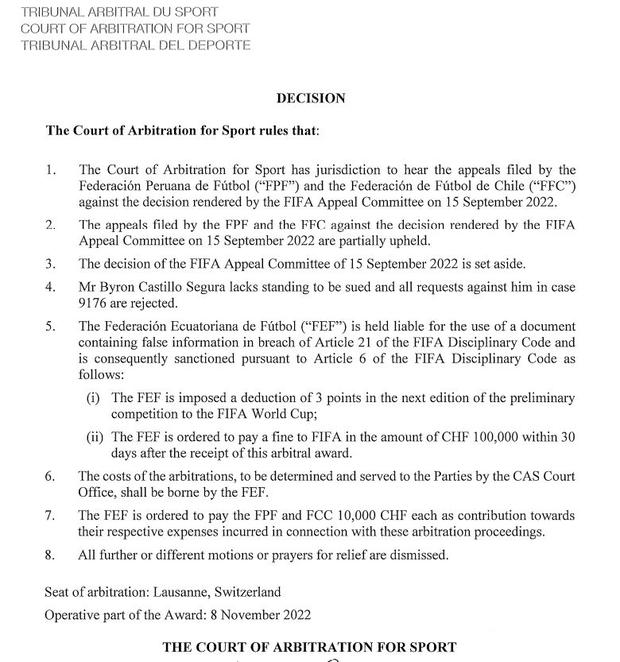 Ten in the morning. In Videna the usual thing happens, in these six days of training, at this time of day: in the distance the voice of coach Juan Reynoso is heard giving instructions to Piero Quispe, something further says Christian Cueva, the first starter of this era, the noise of Lima’s traffic hardly reaches here if it is the horn of a truck. In the FPF offices, hidden behind those smoked glass doors, the day is not so calm: the official email from the TAS is expected, with a copy to the Federation of Chile and Ecuador, with the final ruling on a controversial case, after almost ten months of discussion. Is Byron Castillo Ecuadorian or Colombian? Did he lie or let’s say there was a mistake?

And the most important: will the team led by Gustavo Alfaro be punished and, consequently, will Peru go to the World Cup?

The simple document with official signatures of the TAS indicates that, indeed, Byron Castillo and the FEF have responsibility for the documentation presented that proves the nationality of the León FC soccer player from Mexico. In easy, they did not tell the whole truth. However, Ecuador will play the 2022 World Cup in Qatar and only has to pay a fine of 100 thousand Swiss francs. Any other punishment – it removes her by 3 points towards the next tie, which starts in March – sounds like consolation, gratuity, platinum paper coins.

Brief notes on the case: 1. The claim of the Federations of Chile and Peru was rejected by FIFA in its 2 instances. 2. The request of the Peruvian Football Federation (FPF) requested that Ecuador be excluded from the Qatar 2022 World Cup and instead the Peruvian National Team go, given the fifth place obtained in the table after the northern rival. 3. Jaime Jara, former head of security for the Ecuadorian team, spoke at the hearing of the case about the investigation he led in 2019 to verify the soccer player’s nationality. 4. Castillo was so sure of playing for the cup and that he was innocent, that, in a fun dynamic of León FC, his club, the Ecuadorian mentioned that the figure to follow in the World Cup would be himself.

You must not be in such a good mood today.

Ecuador to Qatar 2022, Chile and Peru without World Cup chances: the reaction of the press to the decision of the TAS in the ‘Byron Castillo Case’ | PHOTOS https://t.co/RDcJEIl28o

As soon as the final ruling was known, Agustín Lozano, president of the FPF, contacted Juan Reynoso, who was leading the Blanquirroja training sessions, to tell him the details of the ruling and the new scenario for March, when the Qualifiers start: Ecuador will start with three fewer points from the first date, vital in a qualifying round in which the ticket to the World Cup is achieved by one point or even by goal difference. The coach of the national team listened and continued the practices towards the friendlies with Paraguay and Bolivia in the coming days, while the FPF logistics staff finalizes details for what will be the move of Peru’s home from the Nacional to the Monumental. Sources close to Universitario and the FPF confirmed that the colossus of Ate will be the stadium in which the team plays at home, at least throughout 2023.

From Chile, a source around the ANF maintains that the entity will request compensation of 10 million dollars for the Byron Castillo case. In Videna no decision has yet been made in this regard, but it is not ruled out.

Those who have never played a Qualifier may not know: everything matters. Down to the smallest detail.

Byron Castillo: the story behind the ruling that proves us right but does not lead us to Qatar