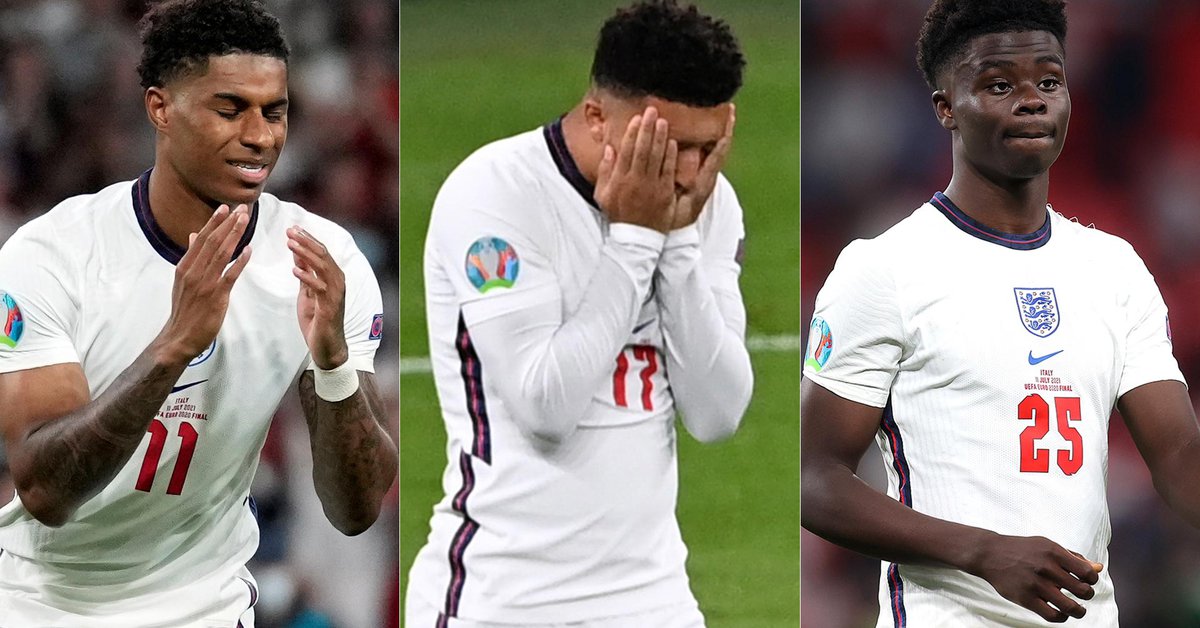 British Prime Minister Boris Johnson on Monday denounced the “racist insults” against three English footballers after England’s defeat against Italy in the final of the European Championship that was played on Sunday in London.

“This England team deserves to be treated as a hero and not racially assaulted on social mediaJohnson said on Twitter. “Those responsible for those horrible attacks should be ashamed of themselves”, He added.

Johnson, who watched the game from the Wembley rostrum along with other personalities such as Tom Cruise and David Beckham, wrote on Twitter: “It was a heart-breaking result to finish this European Championship, but Gareth Southgate and his footballers have played as heroes. They have made the country proud and deserve all the recognition”.

For its part, the FA said it was “Shocked” and “disgusted” by the racist comments made on social media against players Marcus Rashford, Jadon Sancho and Bukayo Saka. All three players missed on penalties after the tense final ended 1-1 after extra time.

Marcus Rashford’s penalty hit the post, while Bukayo Saka and Jadon Sancho’s shots were stopped by the Italian goalkeeper (Reuters)

Italy prevailed 3-2 in the shoot-out penalty shootout and frustrated England’s dream of a bigger trophy after the World Cup they won 55 years ago at Wembley.

The three players named are part of a young English team that has been widely praised for its diversity and social conscience. Rashford, for example, has been at the forefront of a campaign against child poverty, which convinced the British government to restore free lunches for thousands of poor children amid the coronavirus pandemic. Following Sunday’s game, a mural in Rashford in south Manchester was defaced. Local police said they were investigating the “racially aggravated damage,” which occurred at 2:50 am. “This is disgraceful behavior and will not be tolerated at all,” said Chief Superintendent Paul Savill.

Despite Johnson’s message, the conservative premier has been criticized for emboldening those who boo the England team for kneeling before their games to protest racial injustice. Last month, Johnson’s spokesman said the prime minister is “more focused on action than gestures.” That comment sparked widespread criticism that Johnson was in fact encouraging booers to keep going. Three days later, his spokesman changed tack, saying that the prime minister “respects the right of all people to peacefully protest and make their feelings about injustices known” and that he wanted to cheer on the team and “not boo.”

Gary Neville, a former Manchester United player and now a television commentator, said he was not surprised that the three players who missed their penalties were subjected to racist insults. “The prime minister said it was okay for the people of this country to boo players who are trying to promote equality and defend themselves against racism.”, Said in Sky News. “It starts at the top and that’s why it wasn’t a surprise for me in the least to wake up this morning to those headlines.”

Prince William, who is the president of the English Football Association (FA), joined the chorus of convictions, saying he was “disgusted” by the racist abuse directed at England players. “It is totally unacceptable that players have to put up with this abhorrent behavior,” he wrote on Twitter. “It must stop now and all those involved must be held accountable.”

“The FA strongly condemns all forms of discrimination and is shocked by racism on social media against some of England’s players“Added the agency in another statement. “We say with the utmost clarity that whoever is behind such disgusting behavior is not welcome among the fans of this team”, The text continues.

In turn, the London police claimed to be “investigating” the “insulting and racist” posts.

London Mayor Sadiq Khan called on social media platforms to do more to hold perpetrators accountable. “There is absolutely no place for racism, not in football or anywhere else,” he wrote on Twitter. “Those responsible for the disgusting online insults we have seen must be held accountable, and social media companies must act immediately to eliminate and prevent this hatred.”

Sunday’s final was marked by incidents with fans without tickets who managed to enter the stadium by forcing the security fences and bypassing the stadium staff. A scene of violence with fans beating and kicking an Asian man in the hallways of the stadium was filmed and broadcast on social media.

Racist insults against players had already been reported during the tournament. Following a complaint from various anti-racist groups, the Paris prosecutor’s office opened an investigation into a series of racist tweets after France lost on penalties to Switzerland in the round of 16.

(With information from AFP and AP)

From joy to sadness: Prince George was one more fan in the final of the European Championship with his parents William and Kate Middleton