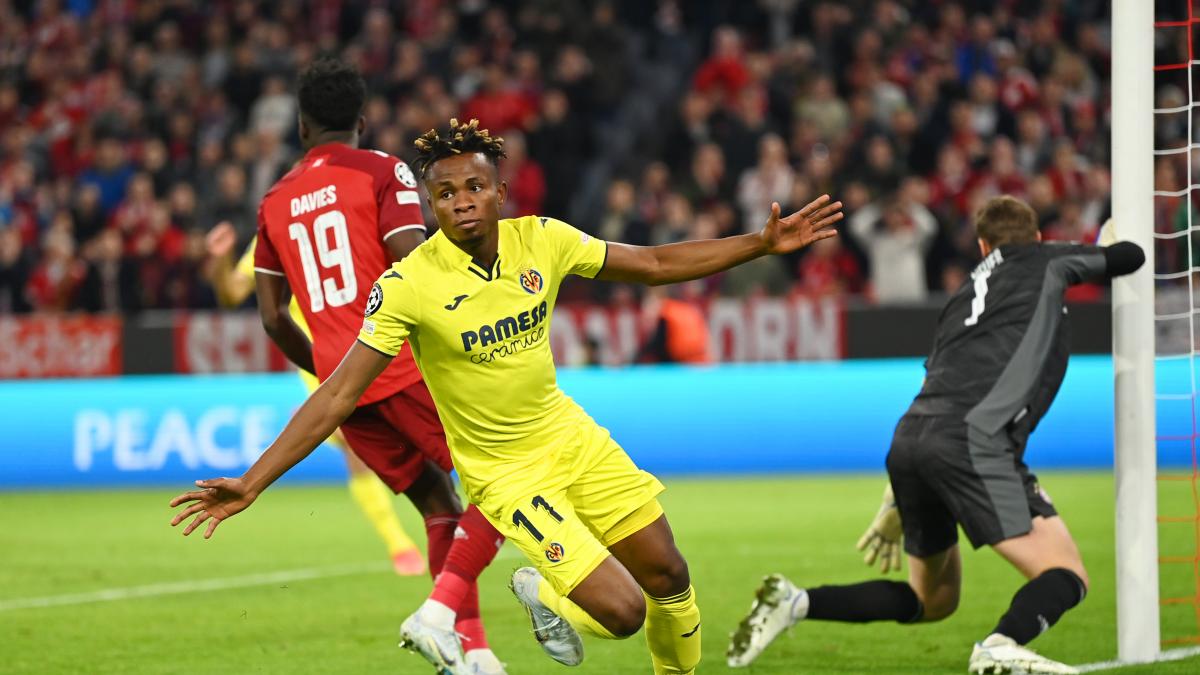 A solid game in defense of Villarreal sends them to the semifinals eliminating Bayern. Emery’s men got a goal on their only shot on goal, making Danjuma’s goal good in the first leg.

We will see their rival tomorrow, in the match between Liverpool and Benfica, at the moment with 3-1 for the English.

Samu Chukwueze put Villarreal through to the semi-finals in the 90th minute (1-2 on aggregate), and Real Madrid knocked out Chelsea at the Bernabéu with a goal from Benzema in extra time (5-4 on aggregate).

Tomorrow, the number of Spanish semi-finalists could increase, if Atlético de Madrid manages to come back from the tie against Pep Guardiola’s Manchester City (1-0 at the Etihad).

These, in a joking tone, have published the image of a farmer with the message “Welcome to UEFA Farmers League”, referring to the fact that Villarreal is a small town, with just over 50,000 fans.

The hero of the match was Samu Chukwueze, who scored the qualifying goal in the 88th minute, after a counter-strike by the trident Lo Celso-Parejo-Gerard Moreno.

Albiol has won the first MVP award at 36 years old.

“It’s been a very long 90 minutes and we’ve been lucky enough to score. For the fans and the family, the club and everyone who works for it, it’s very nice to see this team forward”.


“At home we played a very good game, although we made the mistake of not concluding. They haven’t done it today either and we scored the goal that gave us the pass”.

The first was in the 2005/06 season, when Arsenal de Fábregas and Henry faced defeat.

Moment of communion between the public and the players. maximum euphoria.

The ‘groguets’ take on Bayern in a historic tie to remember. A late goal from Chukwueze sends the Bavarians home.

In shots on goal, Bayern is also ahead, with a header from Musiala, while Villarreal have not tested Neuer.

Powerful driving by Capoue that leaves Danjuma alone in front of the goalkeeper, but the striker shoots wide. The referee has signaled offside, if it had entered it would not be a goal.

The Villarreal bench asked for the second yellow card for the Polish striker, but the referee did not grant it.

The ‘groguets’ are comfortable, they defend solid and patient, and seek fortune on the counterattack, so far without results.

He hurts from a blow to the head when finishing off Musiala, who is treated by the doctors.

At the moment, the ‘groguets’ have not conceded any clear shot.

The Allianz Arena presents a spectacular tifo of ‘Herr’ Muller, the historic German goalscorer, with a banner reading ‘Bomber for Eternity’.

Bayern is entrusted to its greatest legend to get two goals that classify them for the semifinals.

Emery goes out with the same XI, and Nagelsmann bets on a 3 defense to put in another striker.

The players prepare to go out in the locker room tunnel.

The Bavarian public has responded to the club’s call to support their team, which needs to come back from a 1-0 loss against a grown Villarreal, and has filled the stadium’s 75,000 seats.

The stands of the stadium are already full and the atmosphere is spectacular, you can tell that it’s Champions League night in Germany. Villarreal will have to suffer.

The semifinal crossing will come from the winning team of Liverpool vs. Benfica, where the ‘red’ arrive with a comfortable income from the first leg at the Estádio da Luz (1-3).

Therefore, everything seems to indicate that the team trained by Klopp will be the rival of the Bavarians or ‘groguets’ in the next round, but we already know that in this sport anything can happen, so it is important not to let our guard down.

Nagelsmann detailed the importance of “increasing our total intensity, also in our possession”, and this happens, according to the coach, by “increasing the rhythm of the game with fast and aggressive combinations”. The young coach was confident that “perhaps we will have a brilliant game on our part.”

Although he has finally opted for the same XI that gave him such a good result in the first leg, “to have a chance of winning, you have to face those difficulties, and you have to see the confidence we have in ourselves,” explained Emery.

The fans of the ‘submarine’ have already been seen this afternoon in the streets of Munich, and will be supporting their team to achieve their second historical classification for the Champions League semifinals.

The yellow team has subsidized a large part of the tickets for today’s game, leaving them at 250 euros when they cost 700. The fans responded to this offer and filled an entire plane in just three hours.

With capacity for 75,000 people, Bayern Munich has conspired this week to achieve a victory that will keep them alive in this edition of the Champions League.

They say that if things work, it is better not to touch anything. This is the maxim that Unai Emery proposes for tonight’s game, where the same players who managed to give the almighty Bayern so many problems will jump from the start.

Parejo’s vision, Danjuma’s speed and Gerard Moreno’s goalscoring instinct will be the weapons that Villarreal will have to use if they want to hurt Bayern’s defense, which will surely be well advanced, and today a little less populated, with only 3 defenses.

Julian Nagelsmann believes that the most convenient thing for this game is to go to all of them, since he must come back from a 1-0 loss, and for this reason he has shaken the tree of his scheme by proposing to play with a 3-man defense made up of Upamecano, Hernández and Pavard.

The key for the Bavarians is to find good options on the wings, with Sané and Coman looking to hang crosses for the five players who will charge the area to finish off.

Both teams are already at the Allianz Arena facilities, and soon all the players will go out to warm up.

We already know the line-ups of the two technicians, which present some surprises. We analyze them below.

He will be accompanied by his compatriots Tomaž Klančnik and Andraž Kovačič. The video assistants in the VOR room will be Massimiliano Irrati and Jure Praprotnik.

The only casualty for the ‘groguets’ is Alberto Moreno, who has been injured for a long time due to a torn cruciate ligament in his knee.

On that occasion, the ‘gunners’ beat Villarreal, who will seek to write a new page in history tonight in Germany with their second qualification for the semifinals of the Champions League.

If the ‘groguets’ complete the feat as they did against Juventus and qualify for the semi-finals, a very long night is expected in the small town of Villarreal, with just 50,000 inhabitants.

It can be followed live through the Movistar Liga de Campeones 1 channel, integrated into the Movistar+ platform.

Here we will follow the minute by minute of everything that happens in the second leg of the quarterfinals of the men’s Champions League between Bayern Munich and Villarreal.

Unai Emery’s team managed to make a splash in the first leg (1-0), but they will have to resist another 90 minutes against one of the most powerful teams in Europe if they want to reach the semi-finals.