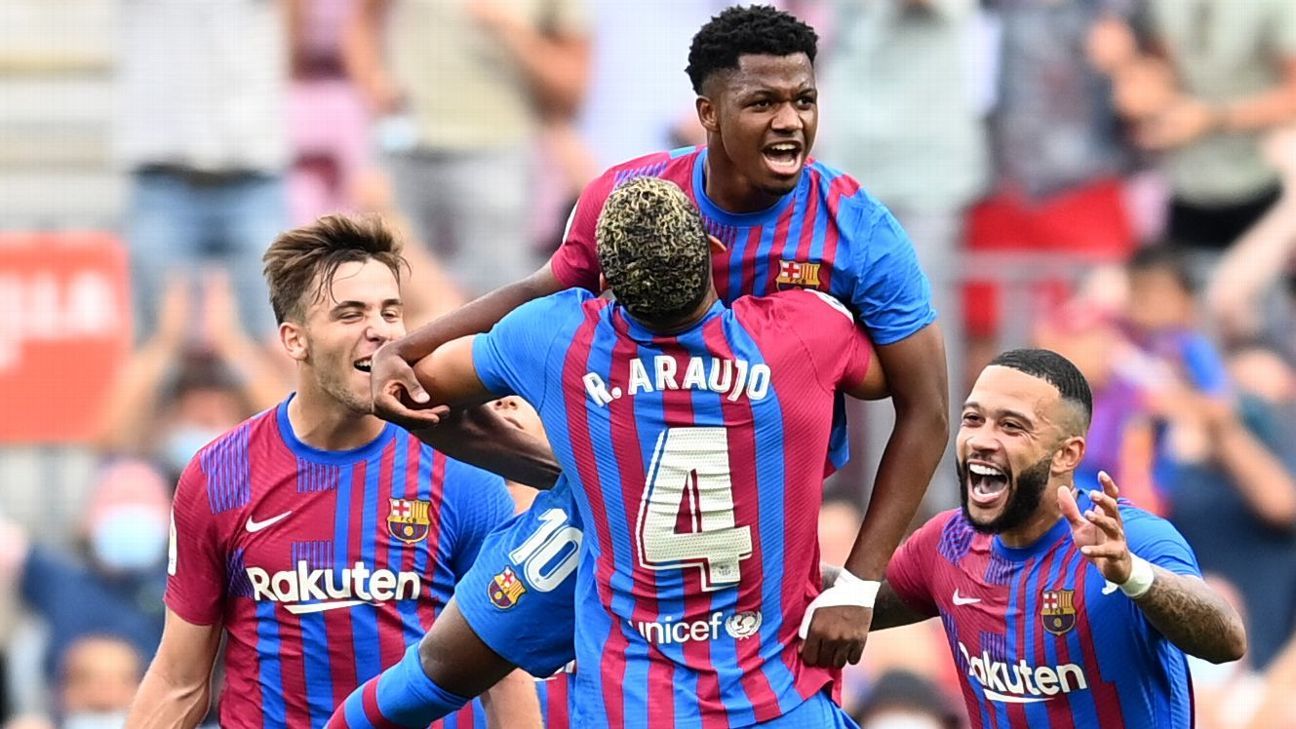 BARCELONA – Waiting, applauding and welcoming Ansu Fati after eleven months of ordeal, Barcelona catapulted another youngster with an air of crack to the plane. Gavi Páez, midfielder, interior, winger and whatever it takes, who turned 17 on August 5 played his first game as a starter at the Camp Nou and 20 minutes were enough to proclaim that he has come to stay.

His was an excellent performance encompassed in a happy afternoon, of moral recovery for a Barça in need of self-esteem … And that he conquered it with a collection of young people in the field. Gavi and Nico. And Eric, Mingueza and Dest accompanying them in the initial team before Riqui Puig entered at the time of the game prior to the long-awaited and celebrated reappearance of Ansu Fati in the final stretch.

A comeback that couldn’t have tasted better. Ansu, injured since November 2020, was received with an ovation to which he responded with an excellent goal that closed the afternoon at the Camp Nou with a win that, without detracting from Levante, had a flavor of the future.

Barcelona looks to the future with the hope that the brilliance of its youth collection gives them. A year ago it was Pedri. And it was Mingueza and also Ilaix Moriba. Now it is the turn of Nico and Demir … And Gavi, a project of crack that, in youthful age, is shown on the pitch with a cheek and an extraordinary solvency.

Precocious talent, the small Andalusian footballer gives the feeling of following in the footsteps of Pedri González last year. He was seen in the preseason but seeing the roster of midfielders in the squad, his prominence was suspected as limited as surprising was, has been, the confidence that Ronald Koeman has transferred him, who after giving him the opportunity to debut in the final stretch of the The game against Getafe confirmed that it will be an element to take into account.

Player of the future with a magnificent present, Gavi appeared against Bayern and against Granada before making his debut as a starter in Cádiz, his brilliant performance being obscured by the sad draw of the critic Barça, where all the focus is on the permanence or upcoming dismissal of a Koeman whose legacy, he ventures, will remain in the form of youth put at the service of the club.

Gavi met in the center of the field with quarterback Busquets, and with his friend Nico González (19 years old), catapulted to the starting position due to gastroenteritis that at the last minute left Sergi Roberto KO. The understanding of the two young people was noticeable from the first moment, accompanied by the captain’s coldness to return the taste for the ball to Barça.

Quick in the combination, the Barça team showed a completely different image to the depressed group that suffered so much against Granada or dragged themselves through Cádiz without any personality. High pressure, verticality by bands and balls to Gavi, who, meeting with Nico, dwarfed a Levante unable to take the rhythm of the game and it would be said that he was even grateful for reaching the break losing 2-0.

In fact, the penalty transformed by Memphis (of course) and a perfect shot by Luuk de Jong, who thus opened his scoring account for Barça, could well be added two other goals, which Aitor saved, first to Gavi’s balloon attempt and then to the poisoned header. from Memphis.

The success of Barça, of this Barça post Messi, must be understood more through the growth of this new generation that must become the undisputed block of the team. It is possible, and probable, that Ronald Koeman has an expiration date and, also, that the Barça team closes the season without titles to celebrate … But success should be interpreted differently.

Success is seeing Gavi and Nico; Pedri, Demir, Mingueza, Èric García, Araújo, Alejandro Balde and, also, Riqui Puig. And Ansu, of course. And hope that together with them and with Frenkie de Jong, Ter Stegen, Memphis, Sergi Roberto or Dembélé, and in the last years of Piqué, Busquets and Jordi Alba, Barça will confirm a project with enough guarantees to smile in the immediate future.