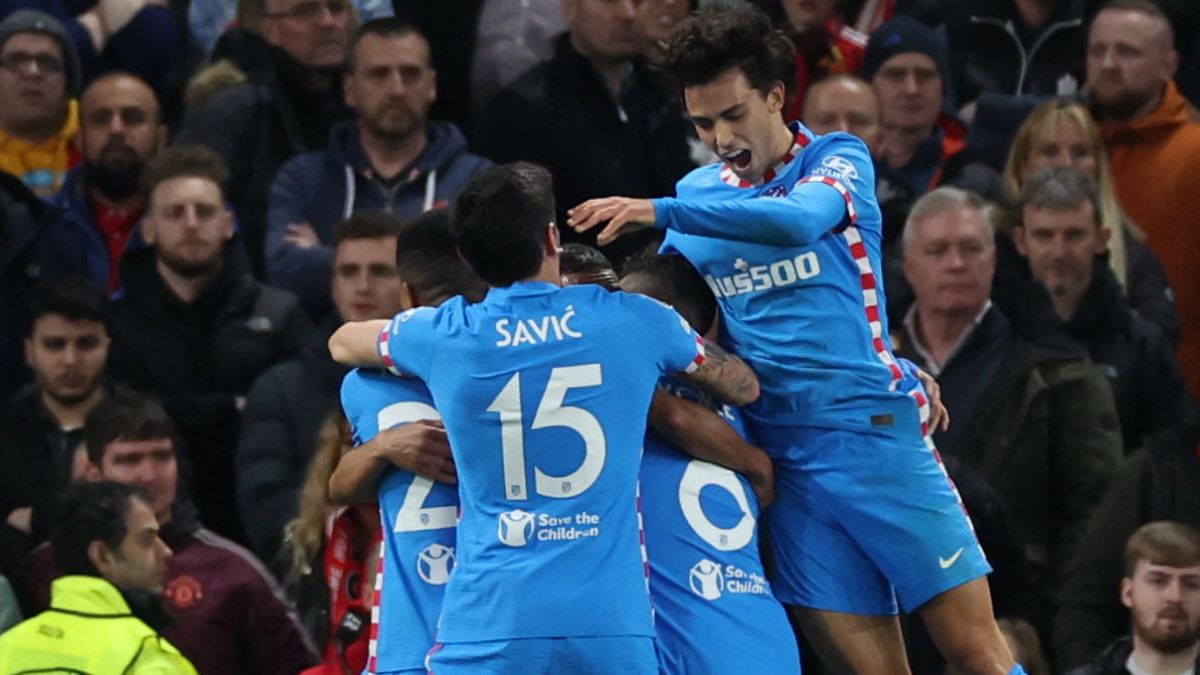 Atleti is like a ball, that piece of leather full of blows that always runs forward. His goal is the network, the emotion, the impossible, and it doesn’t matter what gets in the way. The Theater of Dreams, the rivals, the Cristiano Ronaldos. It always arrives. It’s your destiny. That of an Atleti who returned to football to reach the quarterfinals of this Champions League against United.

A United that wanted to immediately smear the net this round. Pogba and Rashford appeared with Rangnick on the bench. To the green, Elanga, hero in the first leg. United wanted the ball with a Cristiano who moved around the front of the attack showing his teeth. Clack, clack, clack. Atleti took shelter, an Atleti that was the same as the one on Friday, except for Lodi by Carrasco. That is, with Giménez; that is, with Koke. They were all a tribute to the shield, to the resistance. From the first ball, and with a body full of memory, with Cristiano’s injuries on so many nights like this, Atleti came out to protect themselves: defend fiercely and attack decisively. Elanga, lethal when he scratched a space, took Oblak ahead to head a ball in the second minute. Lateral centers were his plan. A little later he re-enacted it: Cristiano, undetectable from here to there, sent another lateral center so that Elanga ran into the Slovenian forehead. The match had just started but the man from 13 behind his back was raising his fist to the Theater of Dreams. The Atleti tonight were twelve. Eleven men and their miracle gloves.

Responded to the second immediately De Paul, in the first play in which the rojiblancos made more than two passes in a row and left their field: a kick to the squad that De Gea took out with the tip of his finger. The Argentine wore his stripes at night, United did not let go of the ball, Fred-McTominay, an insurmountable pivot. Savic, Giménez and Reinildo had work but they were well planted, like Jan’s gloves. The second time that the rojiblancos chained more than two passes in a row, the ball ended up in De Gea’s net. De Paul’s stripes shining again. Koke’s feet made it to the ground, turning the game. His balloons burst red pressure found cracks. Like the one he sent to Llorente, masterful into the hole, and that João kicked into the net. But flag in the air: offside. The 0-0 returned to the marker. But the path of the germans it was open.

The third time that Atleti made two passes in a row the 0-1 no longer moved. The play, almost a carbon copy. Very fast. In eight touches. From Paul first to space, João’s heel for Griezmann. The Frenchman, also first, sought the header of the one who came alone against De Gea: Lodi Nazario. Goal. The Theater of Dreams silenced. United went into the break with Oblak raising the gloves again against Bruno Fernandes.

United came back in a hurry from the booth. Atleti cemented passing lines with a Griezmann in Griezmann mode. No footballer like him takes Cholo’s blackboard to the grass. Efficient in helping, tireless in work, with his strokes of genius. For this he came back, for this. United took refuge in the ball but without danger, just a trompe l’oeil. The rojiblancos got into the cave and the English were not able to find a crack, a hole. Sancho volleyed high, out of sheer impotence, muffled by Llorente. Meanwhile, Atleti, to their own, robbery and stampede. In four touches thrown towards De Gea. In a beautiful choral exercise.

Rangnick sent Pogba and Ranshford to the field with Matic. The ticking of the clock tugged at the English muscles. The last fifteen minutes, also with Cavani, were a non stop raining lateral centers on Oblak. But Oblak continued to do his thing: a hard hand against Varane, a stop to Cristiano. Simeone looked askance at a clock that was slow, very slow, unbearable. His first change, in the 80′, was forced: Koke, lame. The lactic acid bit the legs but the heroes of Cholo resisted, taking oxygen in each lack received. The last ball was a corner that went up to finish off De Gea and that stayed, of course, in Oblak’s gloves, so as not to miss the final photo. That ball called Atleti that, in no time, will be thrown back to the green, forward. Along the path of Cholo, that of the Germans. With her Mikasa skin.