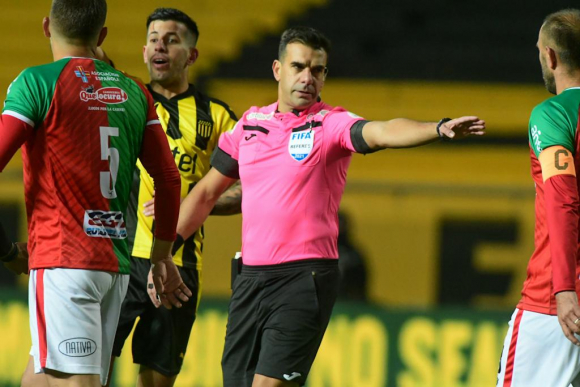 Andres Cunha and Christian ferreyra they will not direct matches to Peñarol for a while, although the measure will only be in the short term, because the AUF Executive informed the representatives of the aurinegra institution that there will be no veto on judges or movements in the referendum structures.

As they trusted from the AUF to Ovation, after the aurinegro pronouncement there was a communication between the arbitration authorities and both parties involved, who excluded themselves from the next games of Peñarol to try to calm things down. However, both Cunha and Ferreyra deny it.

During the meeting between Ruglio, Evaristo González, Rodolfo Catino, Guillermo Varela and Gonzalo Moratorio with the Executive in plenary session of the AUF (Ignacio Alonso, Gastón Tealdi, Eduardo Ache, Jorge Casales, Fernando Sosa, Andrea Lanfranco and Matías Pérez), of which both parties were very satisfied, the members of the local soccer government noted their disagreement that in the statement issued by Peñarol proper names were given (Cunha, Ferreyra and Marcelo De los Santos, a member of the Arbitration Commission) and they also made it clear that they will not accept the veto of any judge.

However, the Executive confirmed Ovation that the tone of the meeting was very good and positive, with an eye toward the future rather than the past, and they accepted Ruglio’s words at the end of the meeting as true that it was recognized that there were procedural errors with the use of the VAR in the match South America-Peñarol (1-1) and that there is concern about the referendum moment.

Modernizing Uruguayan arbitration “is a must that this Executive has,” it was admitted from within it, although it was clarified that the pandemic also disrupted several plans that were had to make it happen.

If (as expressed above) no veto to referees will be allowed, why would Cunha and Ferreyra not direct Peñarol then in the short term? First, because the AUF informed Ovation that the will of both was to exclude themselves, although when Cunha and Ferreyra were consulted about whether this was the case, they both flatly denied it.

Second because in a certain way Cunha will be sanctioned for what is understood was an “excess of function” in the VAR during Peñarol’s match with South America.

After observing and listening to the recording of the actions in the VAR, it was concluded that Cunha suggested the same thing three times to the referee José Burgos before he sanctioned a penalty in favor of the mailbox team.

It was even announced that, as much as he was designated for the Liverpool-River Plate match for this weekend, it should not be surprising that in the coming dates he will direct lower-profile games to get him out of the front row. If so, he would not arbitrate Nacional for a while either.

In any case, there is a very good concept of both Cunha and Ferreyra in the AUF and it is highlighted that both are highly respected in the international arena. Proof of this are two facts:

1. Andrés Cunha was appointed to referee on Wednesday the semifinal for the Copa Libertadores between Flamengo and Barcelona.
2. Cunha and Daniel Fedorczuk are the two VAR referees with the best weighting by Conmebol, so to do without any of them “is to shoot yourself in the foot,” it was exemplified.