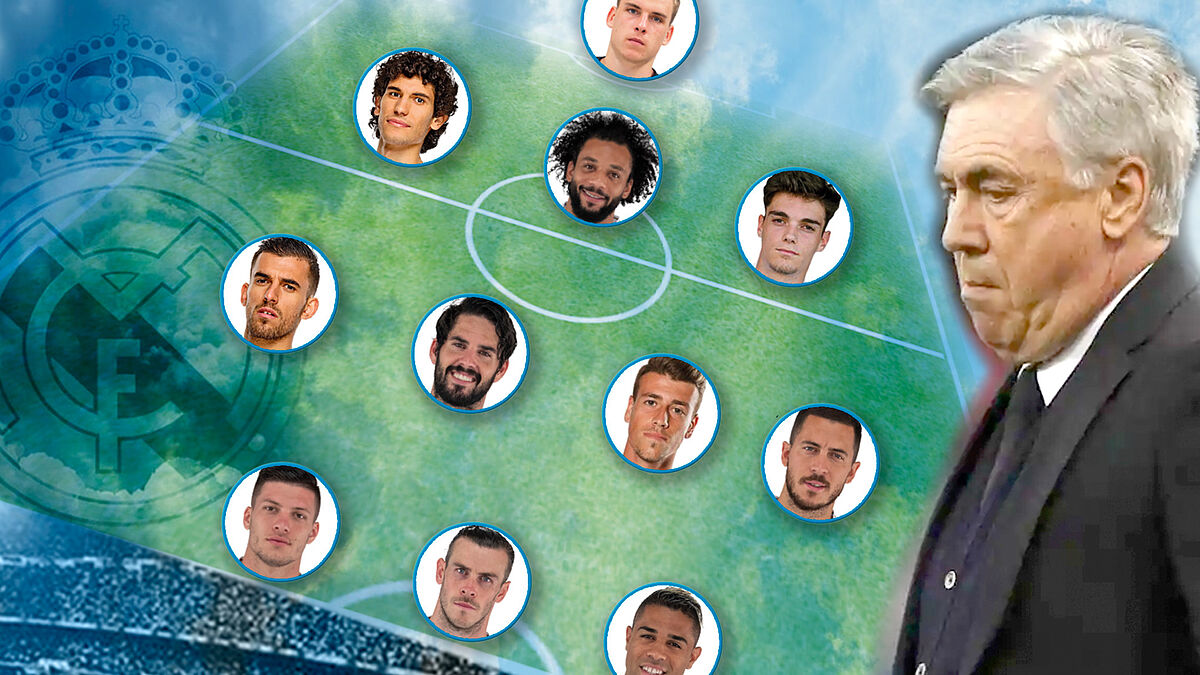 ANDhe Ancelotti’s Real Madrid fell into Saint Mams and it became clear, as it happened to Zidane in some phases of the last campaign, that there is a large group of footballers who barely fit into their plans. In the case of the Italian coach, he can form up to an eleven that plays almost nothing or very little and that will form Lunin, Vallejo, Marcelo, Miguel Gutirrez, Ceballos, Isco, Antonio Blanco, Hazard, Jovic, Bale and Mariano. There are two Castilla footballers that Carlo was originally going to pull from them in times of need, but they have barely appeared. The other nine are from the first team. This is the situation of each of them, ordered from more to less minutes:

He is the most used by far of this eleven of the ‘invisibles’, but they are very few minutes for a player who was called to be important and who for another season is remaining in a discreet background despite the fact that they are respecting him much more. injuries. The fact that he did not play in San Mams says it all because he was the first alternative to the starting trident and in Bilbao Isco came out before him.

It has disappeared in recent games. He did not play a minute in San Mams and has just recently come out of covid. It seemed that he was finally taking flight after scoring in Anoeta and giving an assist (0-2) but he has been fading again. He hasn’t established himself even as a replacement for Benzema despite the fact that he is the other nine and Mariano hasn’t competed either mainly due to injuries.

The Brazilian has not been able to compete with Mendy, because the Frenchman has been at a much higher level and because he started injured and the covid has also passed. It has only been a starting game in the League and none in the Champions League. It is his last season at Real Madrid. He has equaled Gento as the Real Madrid player with the most titles in the history of the white club, with 23, and it seems that both parties have assumed that a brilliant cycle is coming to an end.

It started very well with Ancelotti. Starter against the Sheriff in the Champions League, three more League duels in the starting eleven, third, fourth and sixth day of the League, but he did not appear again. With Zidane he established himself in the first team but now this downturn has come. He has also passed the covid.

Another one that at the start seemed like it was going to count for Ancelotti, but it gradually disappeared. In San Mams it was the first change, something unusual, and it usually comes out in the final stages of the matches if Carlo remembers it. He has only been a starter in two league games, on the second and third days, and in the Champions League he has not played a minute.

He fell out of the Cup in the last game in San Mams. He can’t compete with the best Courtois, who remains intractable. Until now he has not made his debut in the League and has played the two Cup matches until Bilbao: against Alcoyano and Elche. The Ukrainian needs to play more minutes and does not rule out looking for another team to try not to cut his progress.

Madrid is not going to take out the tanks as Bara has done with Dembel even if the body asks for it. That is why he has returned to the calls but still does not play. Also at the start of the season it seemed that the Welshman could rejoin the project, but it was a mirage. And it is that he started the first three league games but no more was heard from him. In fact he has not played since last August 28. He was injured and began another ordeal.

One more year without practically appearing. Like every season, Madrid opened the door for him but the striker clung to the position. He started against Elche and has appeared in two more league games. He has not scored. He doesn’t raise his head with injuries either. He has passed the covid and has almost always been the last option for the attack.

It is early to draw conclusions because he is coming off a serious injury that has not allowed him to play for Madrid again until last January 5 against Alcoyano. Ancelotti has said that he can have minutes throughout this second part of the season. And he has had 20 more minutes against Valencia and half an hour against Elche. In San Mams I did not play.

The idea was always to play with Castilla de Ral to help the first team at specific times. But he hasn’t had a chance either: he played six minutes in the Champions League against the Sheriff and half an hour against Mallorca in the League. He has a lot of people ahead of him and the three starters in the midfield are already closing the door on first-team players.

His participation this season has been testimonial. Three minutes against Shakhtar, six against Granada and four against Alcoyano. Changes to lose some time. He already knew that it was going to be more than complicated with the arrival of Alaba and a Militao who has earned the position by hand and who plays practically everything. Nacho is the alternative if there is any need in the center of the defense.