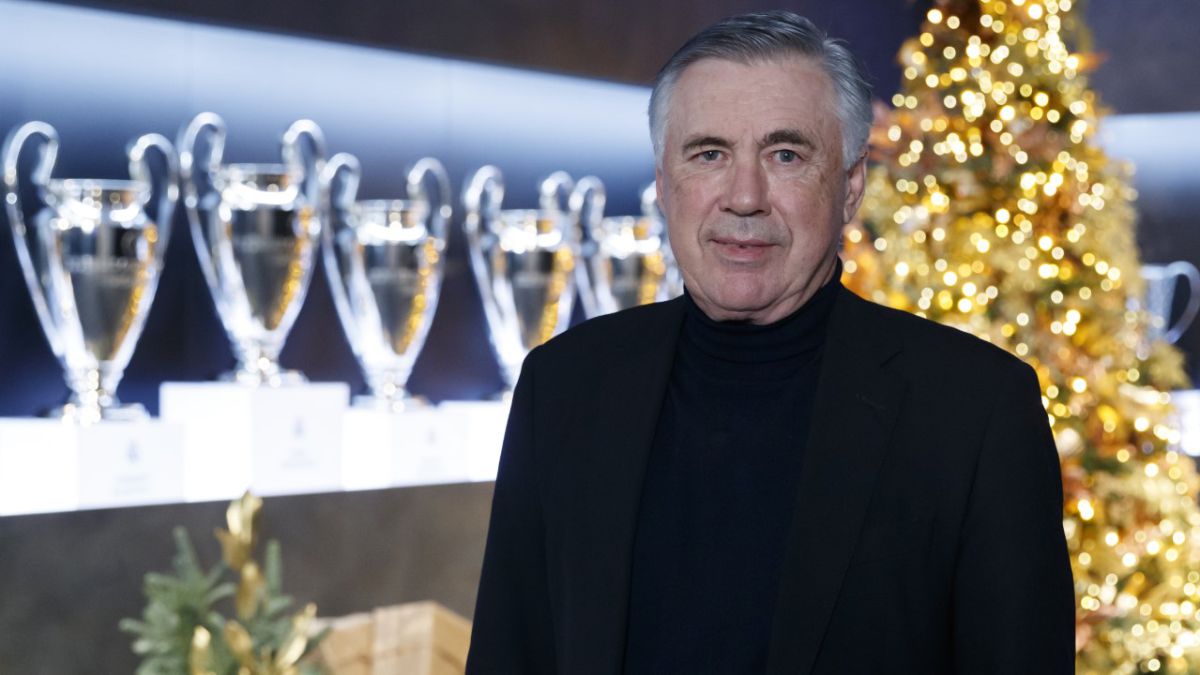 He is in a cloud of so much success accumulated in these five months that he has been in his second stage of target. Carlo Ancelotti (62 years old) enjoy the extraordinary moment from his team, who leads the League more than enough and appears in the Champions League, with the challenge to face the millionaire PSG.

Real Madrid ends the year packed, what has Ancelotti given you?

Perhaps my experience of so many years in football and also knowing how to give the players confidence. Madrid have a talent and quality squad and the coach must give them confidence. It is also the job of the coaching staff to find the right balance between young people and veterans, and that has also been achieved. But Madrid already had a block, a team.

With the same or very similar, last year Madrid was left on the doorstep. But this year finishes the first round as a very prominent leader, almost unattainable.

Yes, but the team was already in shape last year. It was a season in which he competed to the end. The titles did not come, but he competed and was very close to winning at a stage in which the pandemic did not make things easy for anyone.

“Casemiro, Kroos and Modric form the best media of today”

It is already known that titles cannot be promised, but do you at least intuit them?

Promising titles is not the best idea, but we can promise what Real Madrid always offers, which is to compete until the end. We are doing it, we are competing very well in all competitions, in every game. In the first part of the season we have failed very little. We have only had two defeats, against Espanyol in La Liga and in front of the Sheriff, in the Champions League. But it was a stage in which we lacked players like Modric or Kroos. But when both returned it was already seen that the team has a very clear identity.

In his Milan there were stars who played, like Gullit and Van Basten, and footballers who competed, like Baresi and Ancelotti. Does something similar happen in current Madrid?

It’s that a team is built precisely like this, getting the best out of each footballer, in what can help the team the most. Each one has to evaluate his capacity well and put it at the service of his colleagues. This is also a job for the coach, and at Madrid we are achieving these balances. There are players who have higher quality, others greater commitment and some who run more than the others. All are necessary and valid. A team is built by mixing the technical, physical and tactical capacities of each of its players. Madrid is doing it and that is why they compete very well.

There are teams that just play, many, and others like Real Madrid and Bayern Munich that clearly compete. Do you agree?

Madrid compete because it is in its DNA, and that is the history of this club. Real Madrid is a football club different from other clubs. This is not so easy to say about other teams and other clubs.

What of Modric is amazingNot so long ago it was impossible to reach that level beyond 32 or 33 years. What does Luka have, passion for the game, genetics, a bit of everything …?

A little bit of everything, no doubt. Luka and all current players take great care of each other throughout their careers. It’s the training, the diet, the care …, everything a little. That means that current footballers, although there is more load of matches, can play. Players who reach the age of Modric, Cristiano Ronaldo or Ibrahimovic have great merit, but because they are very professional.

“The Champions League draw was unfortunate”

In addition to Modric, do you think others like Kroos or Benzema will get it too?

Yes, I am sure because I see them work every day and I know that they are professionals to the fullest. I believe that all three of them can reach forty years of age competing at a high level. It is true that what I say is more complicated for a forward, who has greater wear, than for a midfielder. But I think all three can do it.

If Modric’s is amazing, it is no less so about his two midfield teammates: Kroos and Casemiro. Without wanting to brag, do you think Ancelotti has the best midfield in the world right now?

Yes I do. All three form the best average in the world today. Perhaps the midfielders who go from area to area are more classic, but Modric, Kroos and Casemiro have so much experience and so much football that they are extraordinary. In addition, they turn out to mix very well. When they are the three together no one can compare to them.

Is Benzema the best striker in the world today?

I think so, because now he adds great ability and scoring consistency to his football. He has as much as Cristiano Ronaldo or Haaland. Benzema is a player who makes a difference. We just saw him again in the match against Athletic, with two goals in a very short time. It is in spectacular shape.

It’s saying Camavinga’s name and any Madridista will smile, do you too?

Yes, it happens to me too. I see it on the faces of the fans (Ancelotti smiles). These young people, like Camavinga, Valverde and others, have to know what they have in front of them, which are the ones we have mentioned before: Modric, Kroos and Casemiro. They are competing with the best in the world and they must evaluate and understand that in the future they will be the ones playing there. Camavinga has immense quality and power, but he must learn and gain experience and knowledge for the position in which he plays. He doesn’t have it yet, but he’s only 19 years old! Every day that he trains with Modric, Kroos or Casemiro is a master’s degree for Camavinga. I’m sure he learns more from what he sees his teammates do in training than from what I tell him!

Something similar may have happened to Vinicius training with Benzema. ‘Vini’ is clearly a better player than he was two seasons ago. He has exploded as a footballer.

It can be, of course yes. Vinicius has improved because he does things with less rush than before. Vinicius has changed especially in that he takes a break in the important moments of each play. The important thing in a player is that he does the difficult things well, because the easy things end up coming out. Vini he knew how to do the difficult and failed the easy. Now he takes more time with the easier plays and it is going well for him. But the important thing is that the complicated thing always tried and it always worked out, because this either works or it doesn’t.

Vinicius also just exploded. Do you think you still have room for improvement?

Of course yes. Vinicius has fantastic speed and talent. I had never seen a player with his ability to overflow, to go one-on-one. But he still has the capacity to improve, for example, in the game without the ball, in attacking spaces and in the shot, where he can progress.

It is not only Vinicius. More young people are appearing. Against MallorcaFor example, Madrid ended up with seven players under the age of 23 on the pitch. It has also happened in the Champions League, in a game in the group stage. Is it Ancelotti’s job to achieve the progression of the youngsters?

The first obligation at Real Madrid is to win. But the progression of the young is another objective. We work very closely with Castilla and there are many players from the reserve team who are appearing in the first team. They are the future and little by little we will have to put them in. This is clear. Now, with the pandemic, opportunities are being provided for them. The important thing is that those who are joining do so with the ability to compete, as seen in the last game, in Bilbao with Peter Federico.

It was regrettable, a pretty glaring mistake. But hey, it was a mistake and nothing more. Now we have to think about the crossing with PSG. The goal is to reach that tie in the same state the team was in before the recent COVID outbreak. What I want is to get to February without injuries and without infections.

Madrid’s rival in Europe is PSG, but then great teams like Bayern or Liverpool itself appear. What do you expect from Madrid in this demanding Champions League?

What I can promise is that Madrid will compete until the end. There is no clear favorite for this Champions League. Those he has cited, such as Bayern, Liverpool or PSG, are. But also Madrid. And Atlético. Yes. Atlético de Madrid can do something important in this type of continental knockout. I think Spanish teams are going to fight in all European competitions because they play good football.

Does Madrid have a half Liga in your pocket?

I don’t think so, no. We have a small advantage and it is true that some opponents, such as Atlético or Barça, are somewhat further away. But not Sevilla, for example. LaLiga is a very complicated competition because you can never say that there is an easy game. There are a lot of good teams and good football looks. All teams have good quality of play.

We have suffered from a global pandemic, teams suffer economically and sportingly and only the clubs / State can endure … and Real Madrid, which is building a monumental stadium and a young team. Are you surprised by the strength of the institution?

No, it does not surprise me because I know the institution, the structure of the club and its president, above all. It is true that at a time of great difficulty for society and for the economies of the clubs, due to everything that is happening with the pandemic, it is impressive that Madrid is fully engaged to make a great stadium, which will surely be the best stadium in the world , and also a team of the future that competes at all levels.

What do you think of the new Bernabéu, are you proud to be a coach in that monumental future stadium?

What I want is to be there, on the bench, the day the new stadium opens!

Don’t you think that in a stadium like this they would like to play the Mbappé, Haaland … Anyway, the best?

Is a player going to ask the Three Wise Men in this winter market?

No, this winter I am not asking for players. I am going to ask what everyone wants: that the pandemic ends and that we can live the future with health. Very Merry Christmas and my best wishes for the New Year to all Madridistas.

Ancelotti, to AS: “Benzema is the best striker in the world”