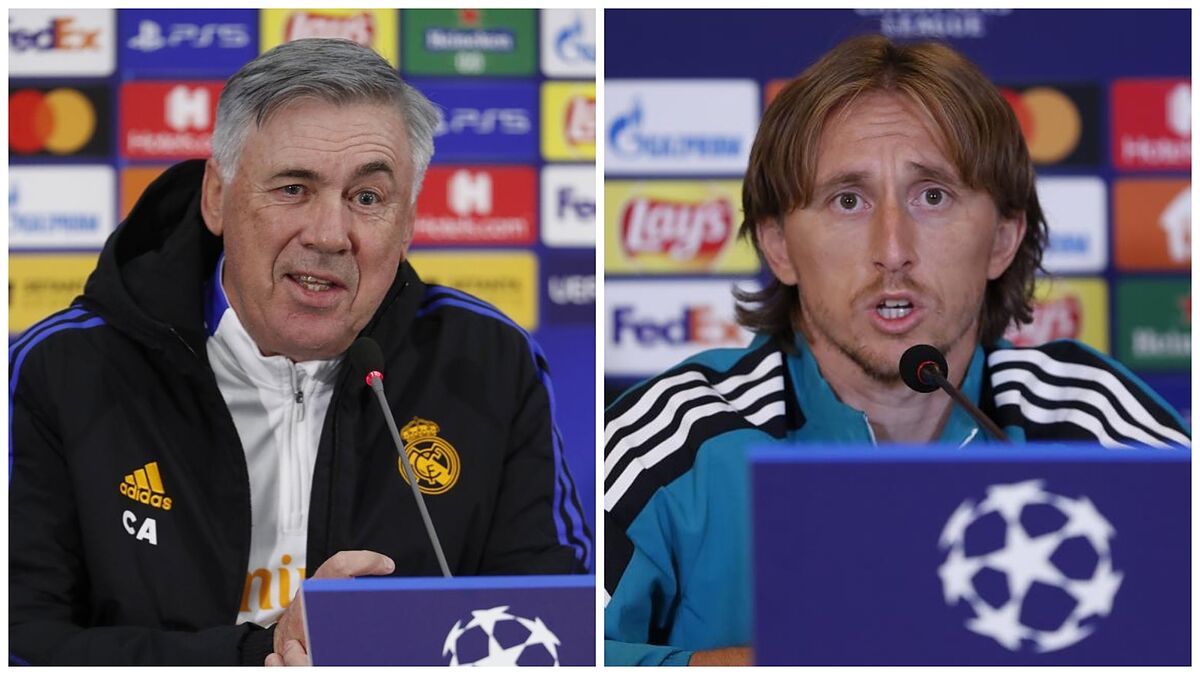 Carlo Ancelotti and Luka modric They analyze the round of 16 second leg match Champions before him PSG. The disadvantage after the first leg, the atmosphere and the situation of mbpp will be the keys.

Ancelotti and Modric at a live press conference

Camavinga: “He is young, he has to continue along this line, you have to be patient with him. What I like about Edu is that he has personality, he is strong and he is not afraid, he has to continue like this. We are here to help him with advice, but What he has to do is what he’s doing. It’s no coincidence that the other day he played a great game, because as he’s training you get games like the other day”.

Pressure: “It’s great on both sides, they want to go through and so do we, they want to win the Champions League and they do everything to try to win it, and they haven’t succeeded, which says a lot about how difficult it is to win it. We won four in five years It seems that it is something normal but no, it is difficult. We all play a lot, we have the same pressure”.

Welcome to Mbapp: “I don’t know, I don’t know what the public is going to do, what they are going to do is support us, not our rivals. That’s the only normal thing for me”.

War in Ukraine: “I hope it ends as soon as possible, it doesn’t do anyone any good. The people who lead these countries hope they reach an agreement, the war is useless. I’ve lived through it and I don’t like seeing these images, it’s a shame for It’s happening almost right next to us and it’s a very terrible thing and I hope it ends soon.”

Return of Ramos: “I talk to Sergio almost every day, the Bernabu has to receive him with all the love, Sergio is a legend of this club and one of the best defenders in history. Don’t let anyone be offended, don’t speak for being his friend but he is the best defender that has passed through Real Madrid and for all that he has given and meant, I think that the Bernabu has to receive him with love and I am sure that it will be so, he only deserves this, there is no other way to receive him a player like Sergio”.

Play with MBapp: “For us it is difficult to talk about players who are not here because the other teams get angry, but I don’t think there is any player who doesn’t want to play with him.”

Stomp on Mbapp: “We haven’t even talked about this. We’re focused on ourselves, on what we’re going to do. We don’t want anyone to get injured, I hope Kylian is fine. If it’s fine to be 100% because these games if you’re not 100% you play”.

Low Block or Pressure: “It depends on the game, each game is different and it depends on what the master wants from us. It is important what the master wants from us and try to do it on the pitch. Tomorrow the most important thing is to go out with personality, with good energy like the that we showed against Real, with aggressiveness and if we do this we have many more possibilities to get through the tie”.

Without Casemiro: “Surely Casemiro’s absence is a shame for us, but we have other players who can do well, like Fede or Edu, let’s see if Toni arrives, who I hope will be. And nothing, I have to do what I always do. An We have to give more to cover this aspect if Case is not there. We all have to give a little more, especially in the defensive phase, but whoever plays will do well tomorrow”.

1:00 p.m.: Everything ready to listen to Modric and Ancelotti

It is interesting to listen to Luka modricone of the veteran players with weight in the team, to test how the team thinks before the duel against PSG.

It is one of the doubts that you must clear today Ancelotti. If you drop it from Casemiro, in addition to forcing him to put in a replacement, it can push him to change the system with four midfielders, to have greater control of the game. you would put Valverdeto Camavinga or both?

The Real Madrid must invoke the Bernabu of the big nights if you want to get into the quarterfinals. AND Santi Siguero tells the different keys for that comeback: the left-back, the presence of Kroosthe doubt between Asensio or Rodrygo…

PSG arrive at their concentration hotel in the capital. Great anticipation and desire to see mbppto Sergio Ramos and the rest of the Parisian expedition in the capital.

One less worry for Carlo Ancelotti. Tony Kroos He began training prior to the match against PSG working at the same pace as his teammates and everything indicates that the German could be in the white eleven tomorrow at the Bernabu. Here you can vote for the most important eleven of the season and many doubts: make the ideal team to face PSG

Ancelotti and Modric press conference prior to PSG, live