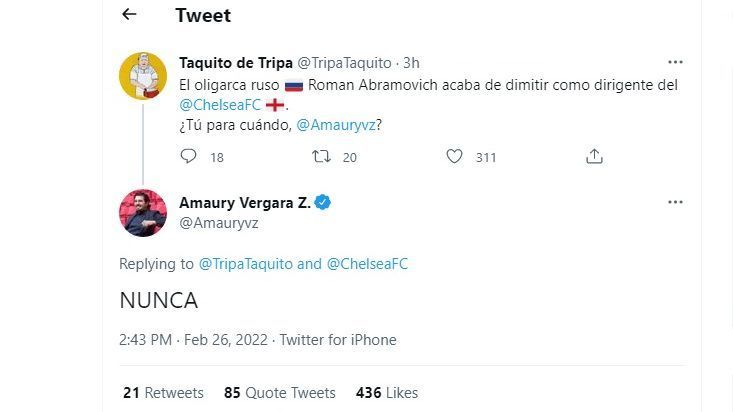 After the announcement of Roman Abramovichwho resigned to manage the Chelsea of the English Premier League, fans on social networks asked Amaury Vergara that sells to the Chivas.

However, Amaury Vergara was forceful in mentioning that “Never” will leave the leadership of Chivasa situation that provoked criticism from the rojiblanca fans.

Through Twitter, a fan asked Amauryowner and president of the Herd, if he will follow in the footsteps of the Russian Roman Abramovich, owner of Chelsea and that he left his post this Saturday due to the conflict between Ukraine and Russia.

with capital letters Vergara answered with a simple NEVERwhich caused a wave of criticism from the team’s fans, which is not the first time that he has asked the businessman to sell the club.

The manager’s tweet had more than 350 responses and the vast majority were negative.

Given this response, the fans asked him to bring “competent people” to the club. Others responded that “instead of clinging to something that is not given to you, you should see for the interests of the club.”

Along the same line, other fans responded by mentioning that Amaury “You don’t know anything about football. Stick to your placebos.”

The tweet also had interactions from other teams, who were celebrating that Vergara stay ahead, because that way they won’t be able to reach their hated rival, America, in titles.

Meanwhile, others recalled the bad step that the club is taking under the orders of Marcelo Michel Leaño, who in the tournament has two wins, a draw and three setbacks.

This Saturday, Guadalajara receives Puebla on matchday 7 of Clausura 2022, leader of the competition.